Hi, new to this site but have had this project on the backburner for a couple of years and intend on devoting my heart and soul to it for the foreseeable future. Keen to see others ideas and to hear others opinions. Bit of a daihatsu loyalist with my daily being a 1994 feroza f310. Anyhow, enjoy these stripped pictures of my project 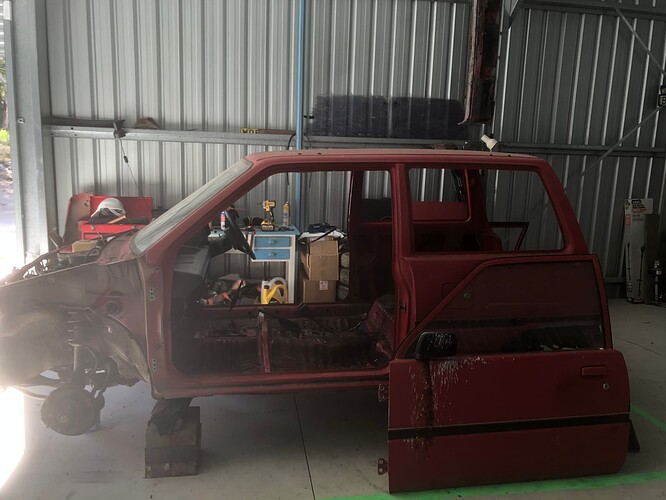 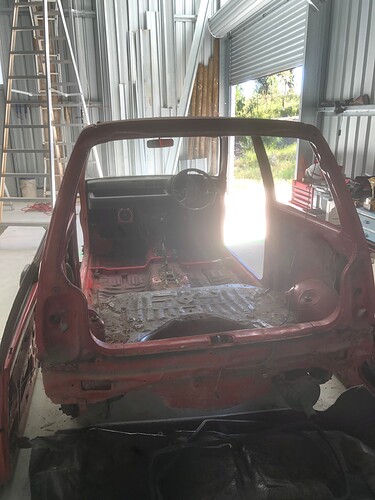 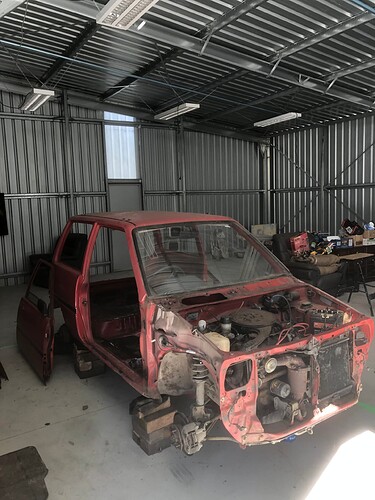 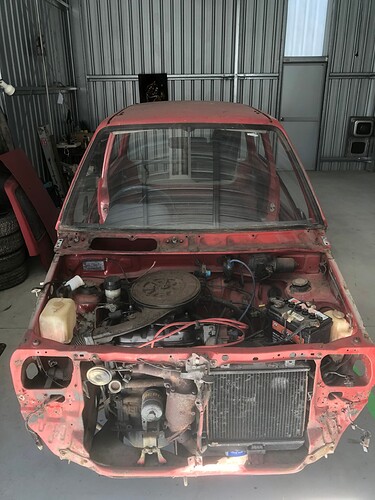 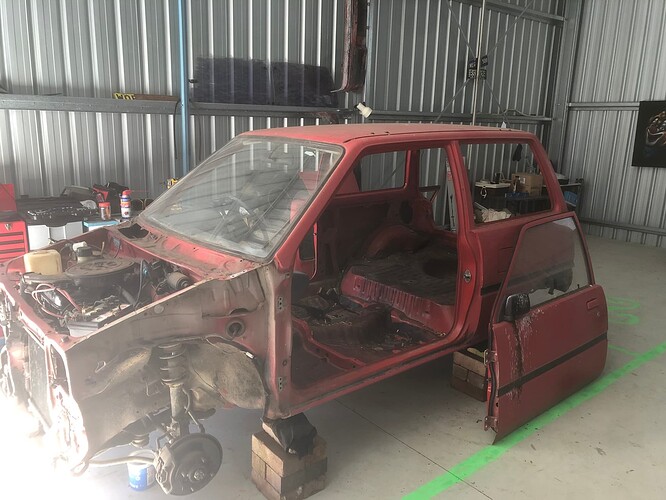 Welcome. You say, “street car”, but do you mean showy street, fast street or a blend? Looks like you have ample space. From my fairly extensive experience I’d say start with the tire size you help to use, wheel size, suspension (including body work there is the wheels need space), brakes, drivers position and sort of in parallel the engine drive train. The three things to make one of these a joy are an LSD, getting the spring rate right and a fast steering rack (std is 3.9 turns lock to lock).

Hey, i mean a blend, but probably leaning more towards a fast street car. Yeah i’m currently trying to sort out adjustable coilovers for it and there’s a bunch of rust treatment that’s gotta be done, i also want to upgrade the brake rotors to ventilated im hoping to some that will fit from another model car. Getting a faster steering rack is something i hadn’t considered so thank you! I plan on rebuilding the engine and both turbo + supercharging it. Also considering upgrading the factory 4 speed to a 5 speed although they are a bit hard to find.

With your coil overs, stay with the std front spring rate. Will be around 110-125 ft/lb. Rear rate needs to be at least 400 ft/lb. Trust me no this. Anything harder in the front it will wheel spin (even with an lsd) and understeer like a dog. Figure out hour to get a 2 1/2" or 2 1/4" diameter coil over type spring in the rear. Cut the chassis spring retainer off and make a new one for the smaller springs. Cheap way to be able to play with spring rates. Packaging wise I wouldn’t both with the twin charged, you’ll end up with a never ending project that cost a fortune in time. Think about going straight to something more modern like a 3cyl KR Toyota engine and box. Cheap, light, modern and common.

Thanks for those suggestions on the springs! Yeah i figured as much for the rear after i did a little bit of reading. I have considered engine swapping, but right now i really want to see how far i can push this ED-10 engine and i know its gonna cost a bomb but i reckon it’ll be worth it.

Look at the gearbox ratios. The EF-EL boxes are pretty wide and final drive is like 4.8 in the 5spd. LSDs for these are jackshaft and rare (I’ve had two), plus there are drive shaft hassles. L700 ef-de box has, better ratios, is a lot stronger and you can get a Cusco LSD. A few mods needed to fit them but not to hard (they also need at least one custom shaft but the boxes will survive anything any ED10 will ever put out).

Awesome thanks now i have a few options there to explore. Do you know whether the front rotors on a 1990 mira l200 would fit straight onto my l80?

Someone else here will know. I have no experience with L80s. If L200 items do fit they are not very good other than perhaps being a larger brake. I would step up to Sirion M100 complete knuckles and brakes. The L200 has the drive shaft run in the hub bearings and then the disc and its carrier hang on that. Whereas with the Sirion the carrier sits in a bearing inside the hub. Explained another way, the L200 can’t be pushed around on it’s wheels unless the axle/driveshafts are holding it up. When I first played with my L200 and gave it some good tires, the right spring rates, Koni dampers and 4.5deg neg camber the axles would flex so much when pushed hard on B roads around my place that the callipers would rub on the rotors when the axles flexed. Going to the M100 items gave bigger brakes, felt more precious (rigid) and no rubbging/scraping. The M100 does not need to have its axles in to push it around on wheels as their is some redundancy in the bearing setup. With Sirion knuckles in you can latter step up further to Copen callipers and rotors. For rear discs Applause or some MX5 rear brakes can be adapted (the latter is the same casting).

G’day and welcome to the forum.
As far as twin charging, drop the supercharger in favour of a better turbocharger. Garrett are making some bang for buck stuff these days and their newest generation turbo has something that is suitable for decent power.
Alternatively you could possibly fit a k3ve2 from a sirion gtvi, 75 Kw straight out of the stock engine. More than enough power to get into trouble. L80 and L200 are very similar in engine bay width.
To fit it you’ll need the in K3 gearbox, if you get a cheap donor you could essentially use all the gtvi wiring, brakes, electronics and mechanicals. Chop the unneeded from the loom.

Welcome, Looks like the beginning of a great project. I look forward to following the progression and see what you do with it.

I wonder if the 3cyl KR Toyota engine and box is the way forward for $/kw as, cheap, light, modern and common. Alu block and heaps available in Australia. Add to that there are go fast off the shelf bits for them.

The KR is nothing other than a Daihatsu using a non-Daihatsu bellhousing bolt pattern: Toyota KR series engines Unlike previous engine designs, there is no room for oversized pistons. Once worn out, these end up as throw-away blocks

not enough meat to re-sleeve?

Use the Toyota box, better ratios.

Yes the liner is a big insert and is said to be unserviceable, but the ductile iron is really only going to be a problem with a catastrophic failure rather than wearing out. At the moment from my enquiries they are so cheap and available throw away and start again. I would though think 10thou over would be possible.

I wouldn’t look to go that big I would look at probably heading to fit a 72mm from an ejde or k3 piston if compatible. Then if it fails try to push it out a bit further with a slightly larger piston, like vitara or something but I think a 74mm would be out of range. It would be a fun project though.

Please excuse my lack of newer tech and what engines there are I usually only concentrate on what i currently have and only investigate further if and when needed.
I have enough trouble remembering what day it is ahahaha!

also, excuse the multiple posts but I just had a read of the block and the cylinder walls info and that they have the 7mm between them and the cast liners are in the alloy cylinder walls. The thing you would need to do would be to sonic test each cylinder and determine how far back into the alloy block that the cast goes into.
From when I worked at an engine reco place and had done sonic testing on v8’s. All of the sleeve’s in every block that I measured were 2mm thick from memory.
So in the theory, if they are 2mm thick so taking or machining out the sleeves and bore and even replacing a sleeve inside to fit it would be possible to get the 72mm piston in. This makes me wonder though if the water jacket coolant system is adequate enough to be able to keep the temps down? I would be optimistic and think that it would as I believe Daihatsu/ Toyota would leave enough wiggle room for slightly higher longevity of the engine from the factory even though classed as a throw-out item. If they break too soon it’s a failure but if it lasts that little bit longer then it’s a win for the company.