My names Adam I’m 23 from Vancouver, Canada and I just recently got my 1996 Atrai RT Limited S120v that is a RWD, 3 speed auto, EF-ZS engine. I plan to do a Youtube build series on the Van and use it as a pop-up store for my mini digital gauge business Enginetix Performance!

When I bought it a couple weeks ago, it did not run and had no spark or fuel due to a melted engine harness. Luckily my good friend and I got to working on it and he discovered that the previous owner did not realize one of the factory grounds had a positive wire INSIDE of it and they had attempted to connect it straight to ground causing a short which was likely the cause of the melted wiring.

Unfortunately, we’re now fighting an issue with transmission not shifting properly. It holds first gear very high up in revs, but I can get it to clunk into second by modulating the throttle at about 20-50%. It also has troubles downshifting at times. Further, a couple times the PWR light on the dash has come on flashing, which I have no idea what that means. Have checked the dipstick with the engine hot fluid level seems good, nothing looks visually wrong with the linkage or transmission harness, but who knows with that engine harness being melted. Will probably make another thread asking for help/info on the transmission later, but for now it cruises great around the block at low speeds! 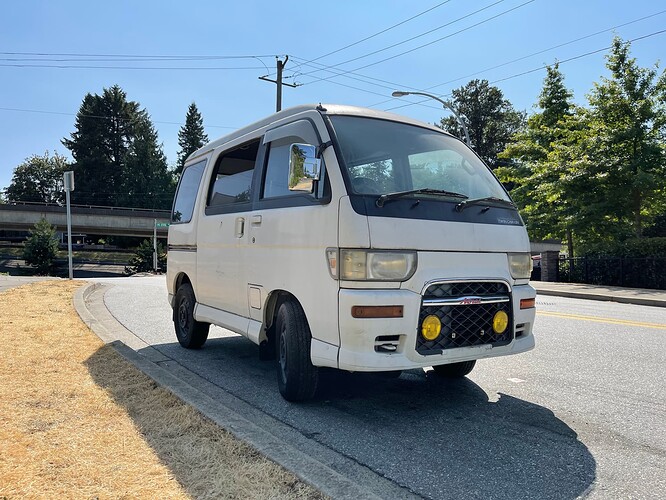 Thanks! Hopefully will be a lot of fun, have barely driven it due to the issues, but man I love it already. Only car I own that has no expectation for performance and it’s great!

welcome to the forum, such a cool looking van

maybe change transmission fluid and filter will help it if you haven’t done already?

Thank you! I know right, I can’t get over how aggressive Daihatsu made the front end

! Definitely want to do fluid and a filter, but I can’t find any information on the 3 speed in this thing, so not sure where I can get the filter/if it’s even available. Any ideas hahaha? The fluid on the dipstick is still a nice red colour / doesn’t smell burnt and there’s a sticker on the door saying it was done about 40,000kms ago so at least it’s not original

welcome mate that van looks fantastic. I’m a bit jealous to be honest. Auto’s I have no idea about unfortunately sorry other than filter and oils as said above. Maybe a specialised auto gearbox mechanic if you cant sort it? Although I dont know how you would go with the zero knowledge people have with daihatsu’s these days.
Oh welcome to the forum

Hello and welcome to the forum.

Cool van, I wish I had some knowledge to pass on. The best cars are usually the ones without a plan.

Hahaha thank you so much! Ya exactly doesn’t seem like there’s a whole lot of knowledge in general on Atrais or Hijet automatic transmissions that I can find, but I will keep looking. Will do filter and fluid first if I can find the darn part number

Thank you! Yes that is true haha

Welcome Adam. An Atari! This is great.

Thank you! I thought it was actually called an Atari until I looked at the grille hahaha

Atrai - Atari? I think the mistake will stick, not so much on purpose but just out of common/uncommon use of the words in English.

Hahaha it would be cooler if it was Atari! Would give me an excuse to do a retro video game theme

that would be cool to do regardless lol