Has anyone here done any internal upgrades on an EJ-DE. I kinda want to take my Cuore (The Curry Cruiser) of the road and learn how to work on it and use it as a learning platform in the long run. In saying that I would really like to turbo it but due to Green P plates, I won’t be able to drive it anytime soon. So any info on building an EJDE to withstand 200+hp would be greatly appreciated. I know you’ve asked about internals, however, what you are going to do with it will have quite a bearing, as will the fuel and ignition control your intend to use. Road car or drag car will only see max power for fleeting seconds, and you’ll want that big hp. Hill climb, khanacross or circuit you’ll want a broader spread of power and torque. Plus these forms of racing require much more care/quality since it will see sustained rpm. My na ej-de saw 79-80hp with a few mods, cam timing was really important as was lots of detailing of all inlet and exhaust tracts. While I have stalled on building a good bottom end the plan is to use GSXR600 OS pistons, Argo custom rods, a lightened crank, much much bigger cam, Triumph motorcycle triple throttle body (choked down in size), an Autronic SM2 ECU, big head bolts, the current 2.5kg flywheel and Ferrea valves. It should be about 1100cc and 13.5:1 comp. In the comp that I do going turbo puts it up a class as that means x1.7 in capacity and also you are suppose to carry more weight. A reliable 200hp is, in my opinion even without taking and ecu into account, going to be well over $5000. For the turbo route expect a lot more unless you can fabricate your own manifolds. Then you’ll need a good clutch and PP. Mine was $800 and good for 300hp. 200hp will need a lsd, the centre is $1000 not fitted. Don’t let me turn you off, but do plan.

He isn’t asking for your elaborate plans

You have a few options
If you have fiddle fingers to build, then yes, there are 3rd party parts to mod these for turbo
We don’t have the p plates thing so I don’t understand that one
But basically you seem to be saying that you’ve got time on your hands to do this

He asked about a “built ej” and I assume licence wise that could be driven legally as opposed to waiting two years before having an open lic. But I get what you said. My point is you won’t get 200hp on the cheap, 130 with a turbo, maybe, which is an awful lot for an L700. I completely agree on the K3VE. For a P plate driver, you learn a heap doing it , get it on the road and it’d be damn well quicker than a built ejde na

there is a lure to building an engine which i appreciate
but i’ve spent a lot of money modifying when i should have “hot-rodded” it as my dad calls it
then since coming to this conclusion, i’ve had a couple of great cars that had basically modded engines transplanted from heavier cars that have worked so well, that I’m totally into the idea now
not new thinking globally -but a revelation to me

which is why i’m so in love with the k3 conversions
can i say it any other way?

in saying that, i reckon an ej-de with a reground cam, header, nice exhaust and maybe slightly fiddled gear ratio’s to closen it all up , matched with some tasty but modestly priced suspension would be a floopin sweet curry cruiser! [and i’ll confess is something i’m working on at the moment

Be as hard as you like with the constructive criticism. It’s healthy and makes us all think.

The K3VE non-turbo in a L700 makes for an amazing car that you would enjoy. They are damn fast and fantastic to drive everyday (I only drove one a little bit a few times). I would though do a lighter flywheel. Doing this would be a great start in “learning how to work on it”. 200hp from it is realistic and you’d get that at a fraction of the cost it would take on a EJ and would be much more reliable as a drag or street car. Jono Muir has gone the “fully built” EJ-DE in an L700. He’s done most of the fabrication himself - beautiful work the like of which is beyond my skills. It’s a street and track build, however, he’s currently having headgasket issues and had to pull block out to drill and tap for big head bolts (Nissan VG30E ones cut down). If you look on FB and search for his name you’ll get more pics 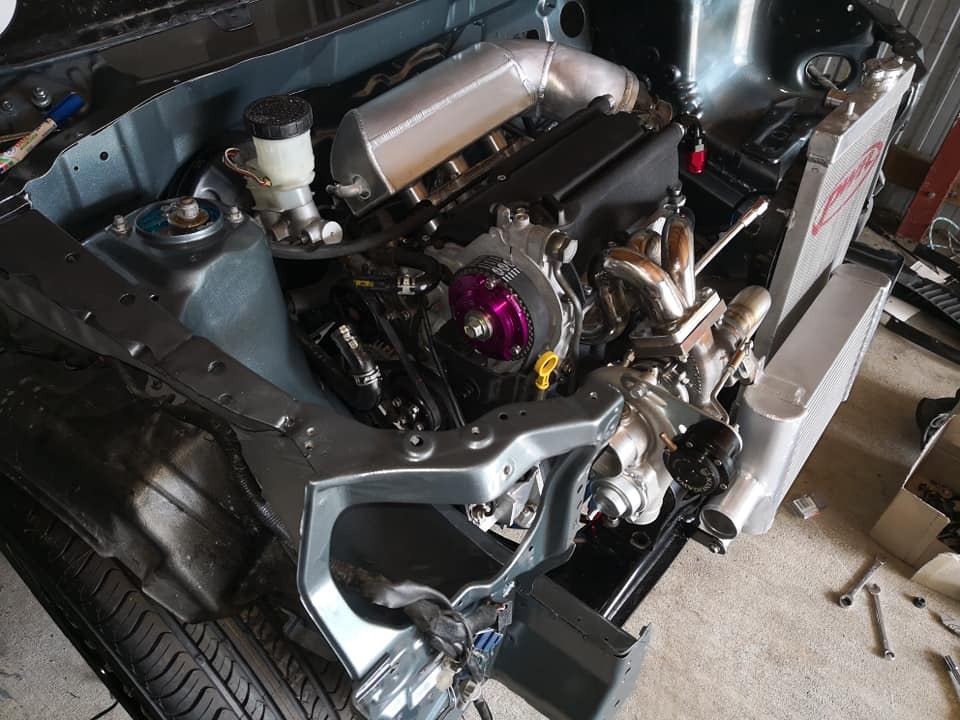 as they say, power isn’t cheap, especially when you are talking 4-5 times what the motor is designed to handle. While on your P’s, i would look at going an N/A screamer with higher compression, extractors and exhaust if you really want to learn about them, and really unless you get an aftermarket standalone ecu, you won’t get the best performance from any upgrades even basic ones. Power is nice but too much and other things will break and require expensive upgrades to handle said power, ie clutches, gearboxes driveshafts etc. Pretty sure it was @Mr_Gormsby mentioning he has seen 140 odd hp on stock EJ internals, but alot will do with tune etc as said.

That turbo EJ was pretty much an on and off switch. It broke a lot of gearboxes and axles. The TD05 on it may have been too big.

what general mods would you suggest for an N/A motor @Mr_Gormsby, around 50-60 hp or so at wheels i am looking for, i was thinking K3 pistons, extractors, exhaust. what size exhaust 1.75" or 2"

@Mokeman I have some K3 pistons if you need some they may need and I do have some. I believe one piston has new rings and I may have another set of 2 but unsure. I would have to check. Also because Im hardly on Facebook I dont know if it was you or not looking for lowered springs. If it was and you still are looking let me know. I have a set of rear low kings and a set of front low rsr springs I would probabaly part with if you are in need still.

I love that you are looking at this. I don’t think an NA EJ wouldn’t need anymore than 1.75". I’d go 2" if going press bent I guess. I think some k3-ve2 pistons would be a good way to increase compression ratio. I feel this is where your biggest gain will come from. I know there are difference between the K3 and ej pistons, but, cannot remember how they are different. Sorry.

I have both here and the k3 pistons have a shallower dish in them than the ejde they also have a smaller/shorter skirt and so there fore would fit the ej. Rough measurement (from memory) the gudgeon pins are same diameter as is the piston height from the middle of gudgeon to piston top. If you were putting ej pistons in a k3 then you would need the piston’ skirts machined as they are too long in the k3 block for the rotation without fouling, but this way aound is not an issue. I cant remember ring height’s off hand but unless your block bores have a major lip then it shouldnt be an issue.
As for exhaust I believe Mr G has the best sized exhaust and I am probaby wrong in guessing but I think it is a 1inch 7/8th? @Mr_Gormsby am I close? if you go too wide you may lose power.
I know it was only an ef/el but my first mira I had a 1.75 exhaust and it was great and then I tried a 2 inch and I felt like i lost power by going bigger.

Yes exhaust. Extractor design does not matter much when it comes to runner length. Combustion events are 120deg appart so no scavenging. If the shape is smooth and looks good it will probably work well. My exhaust is 1 7/8", however, it goes straight from front to rear without having to go around the fuel tank. 1 3/4" or 2" would be great (bigger may only benefit higher rpm). More compression would be great. I am at 68fwhp with std pistons.

Adjustable fuel pressure reg and wide band O2 with an AEM or Innovate style meter will help to tune it a little. AFR should end up about 13:1 at WOT.

I added a alu adjustable cam sprocket. Retarding the cam 5deg or so is something it liked. The gear was cheap through Aliexpress and seems extremely well made.

If doing the pistons, I’d at least get the combustion chambers tided up of all sharp edges. There will be no downside to the tiny loss of compression, instead you limit knock and get a more powerful/quick combustion event. If you happen to have the valves out, tidy just inside to blend the valve seats to the ports, as a minimum.

I machined my flywheel down to 3.5kg. Big difference in how the thing felt with that. As power is a function of torque multiplied by engine speed less reciprocating weight means more power as it can spin up faster.

I’ve not done pistons yet. But the plan is to use some GSXR600 pistons with custom rods. The bits are all sitting there for “when I get around to it”

Was going to ask about the cam timing gear also, good to know.