Some of you may of already seen my introduction post where I mentioned my newly acquired G100 Charade with a CB61 engine swapped in.

I thought it best to start a build thread here so I can focus all technical questions and discussions into the correct area.

Off the top of my head, the minimum things that need doing before I can get the engine RUNNING.

Things to do before I can get it DRIVING:

I will leave the list at that. This is fairly high level and I am certain that several more minor jobs will pop up as we continue into the build.
Not much more would be required ontop of that to make the car roadworthy so I won’t bother with those boring details.

Some pics of the car:

I am currently stuck on the fuel tank and pump situation and would love some input:
The car came with a tank and hanger for the turbo CB61 engine (includes in tank pump), HOWEVER, I have since discovered that the tank is to suit the 4dr and so the tank fill and breather points are all in different spots which is a shame as the tank is in good condition.
The old non-turbo carby tank is full of stinky old fuel and sludge. I am yet to have a good inspection of it, however, I don’t believe there is too much rust or anything nasty.

I am thinking that the best way forward would be to:

My question is, will the factory turbo carb RRFPR manage an EFI fuel pump? Or should I purchase an aftermarket turbo-carb RRFPR that is designed to work with modern EFI pumps (IIRC ~$120AUD)? I am not sure what the fuel pump on the turbo-carb tank outputs as far as pressure, does anyone know? If it is the same as a modern EFI pump then I can’t see my above setup being an issue.

Some pics of both tanks and turbo-carb fuel pump for reference.

Have a look here for some G100 rally/race inspiration and history.

Might put a sprinkling of Daihatsu rally projects in here. While not specifically “a one car build”, I will seek to find some info on serious rally builds to put here. Would be good to find some info in the Group B Charade, especially on “the build” of it (if I can find that I’ll put it up with its own topic so easy to find. Please add if you find anything.

the turbo carby models fuel pump run at alot lower pressure than efi fuel pumps fro what i understand, somewhere around the 5-7psi range compared to efi running at 43psi

The old tank has been cleaned and reinstalled into the car with a new 7-9psi fuel pump installed.

Last night I ordered a couple of M10x1.25 banjo bolts, as I am missing the banjo bolt to connect the fuel line to the carb.

Dropped the oil for an oil change and it almost completely filled the 5L pan, so I’m not sure what’s going on there… does anyone know the correct amount of engine oil (and which oil filter and spark plugs) for a CB61? ​

I purchased myself a stand-alone belt/disk sander the other day so was able to reface the exhaust manifold - which I am glad I did as there was actually quite a bit of pitting that became clearly evident once I started.
Excuse the rusty rust and corrosion on the turbo, it still works just fine haha! 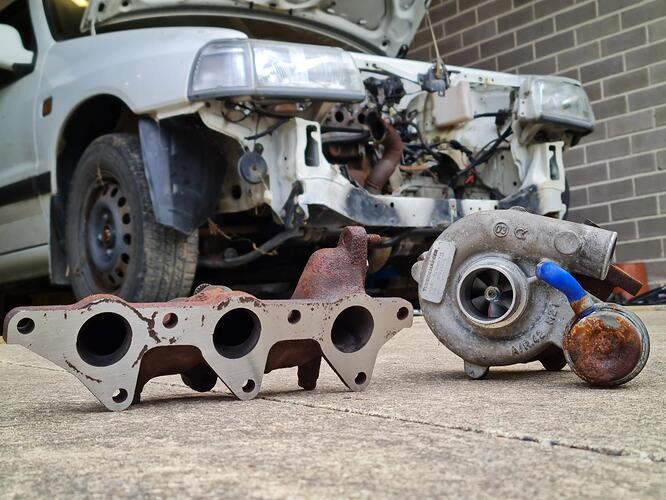