Been a long 3 years building this thing in the garage as a practice build for me to learn “how to do it yourself” as I had never dealt with building a turbo set up before. I’ve threatened to sell it way too many times during this build but here she still is and every time I drive her I forget the pain she caused me trying to get parts to fit and actually work.

For a tiny 660cc motor she pulls really hard, such a fun go kart and turns plenty of heads, however the last tuner said its currently maxed at 15psi (safe tune) due to the size of turbo and throttle body in comparison to engine capacity output. Meaning to wind up more boost would require smaller turbo/throttle body set up. My goal for this project was 100hp at the front wheels.

The last dyno was a max 75hp at the front wheels which was less then the original tune and dyno of max 83.2hp but that could just be different dynos. Need to revise my set up to pull another 20hp to get to my goal of 100hp @ total vehicle mass weight of approx 690kgs. Which is a fun power to weight ratio

Next on the to do mod list is:
-an LSD set up, been looking at the NZ Compact sport site for what they have as I seen they have a 1.5 LSD for $1400. Would love to hear from anyone on here running FWD lsd and your opinions / experiences?! Not sure what my best and most reliable option is
-better grippier tyres, possibly semi slicks up front, if anyone has any recommendations?!
-New E85 tune or flex fuel
-Brake upgrade 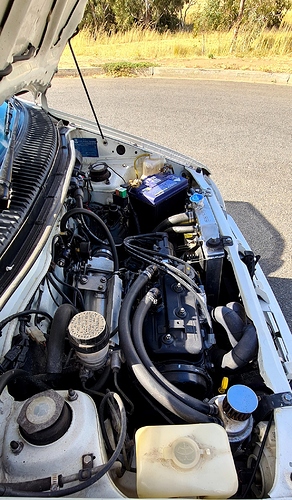 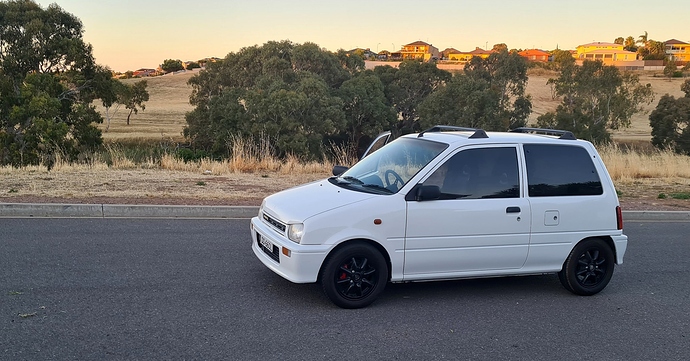 i was lucky enough to drive Little Space Princess last year, 200+hp K3 turbo powered L700, she has a 1.5 LSD and wow what a difference. no wheel spin, she just sat the back end down and took off like nothing. i haven’t driven a turboed fwd car before that and it was really hard for me to stop grinning lolz

I saw you post on facebook the other day and was hoping we may see a build thread here and BOOM! You have done it. Thankyou awesome car and you have done quite a bit to it.
I wasn’t expecting to read 72mm pistons in a 660cc block and after reading your setup I am sort of surprised you didnt get more on the dyno.
I had my (now sold) Move on dyno when it had an ed engine with ef head and 72mm ej pistons in it. It was only running 7-8 psi and I only got about 46 hp. It was leaning out and not running right etc because of the stock fuel pump. Taking that into mind I can sort of see it may be about right.
I never had it on dyno again but final set up was a tdo4l on the stock ed bottom end with ef head, greddy blue piggy back exhaust was made up of 2 and 1.5inch.
Definitly do take it down the drag strip. It is fun.
I have taken many slow cars down the strip more to see what they can get and fun.
The move as N/A got a 20.5 then the best with the turbo setup was a 16.38 I think it was.
I Think you can get more out of your mira. I think main limits I have seen with most modifed is around 130hp.
Maybe have a read of @jakey033 build thread and he also may be able to give some tips etc. I believe he is currently running a 660 turbo build

oh on the lsd topic they can be hard and expensive to get. I never bought one for my move instead I got a jackshaft that allows you to run equal length drive shaft’s. It is supposed to reduce torque steer and yes it did work better than standard drive shafts but not to the same effect as an LSD. If I spun the wheels (in straght line) I would get both wheels spinning and not just one like I did with normal set up. So that maybe an option if finding an LSD etc becomes too expensive or too difficult to find. Yahoo auctions is the best place to try to find such things.

Fits the Mira perfectly, was lucky enough to get the set cheap from a wrecking yard couple years back. Just cut out the 3 seperate electric motors under the drivers seat as it weighed a ton and welded onto my original seat frames. Very comfortable seats!

That LSP is just amazing from what i’ve seen. Ive never been in another kei or mira before building mine so my comparison is only to the standard engine set up when I first bought her. The turbo set up on her now has made it much more enjoyable to drive and has also fixed the top end speed issue where I can now sit on the freeway at 110km/h in 4th gear and it just wants to take off under spool even up big hills haha

I was nervous about spending more money to get LSD set up in mine, as I’m now over my original budget now, but from what I’ve read, its definitely the next thing I got to do

To be honest, I really wasn’t sure what to expect on the dyno after tuning, I was hoping for around 100hp at the front wheels so when I got the results I was a little disappointed as I had been told by many different ppl what to expect, but then when I first drove her home from the tuner, it felt bloody faster then I thought it would so never really was concerned about being under 100hp.

I think 100hp should be as simple as installing a smaller turbo/throttle body and tuned on E85 flex fuel . I just don’t want to invest much more money into her now as I just want a decent LSD set up and that will be expensive.

Running 16’s on a mildly modified kei actually is pretty good haha have you goy any vids of yours @evilhighway? If I can get the LSD and decent front tyres I would love to crack 15’s in its current form. Would also bring a few laughs and smiles at the drag strip to no doubt. My mates custom Turbo Barra Landcruiser is jacked up and on monster tyres so although he will smoke me I reckon, it will be a bloody laugh out there lined up next to him

I’ll have a suss of jakeys build today

yeh the vids etc will be in my build thread

If I may offer some additional 1st hand experience. I have a Sirion gtvi with the factory k3ve2, so no rush of torque to contend with like a turbo, however even with the limited power/torque the inside fronts would easily spin up on the track in tighter corners with semi-slick / performance street tyres (think NS2R not AR1).

Along with the LSD, I put in the copen (higher) final drive, which was only going to increase the wheel torque and likelihood of breaking traction.

Well the LSD is the single mod i’ve done to any car i’ve owned that has had the biggest impact and changes the dynamics of the vehicle on the track. I can understand the comments about LSP above regarding acceleration from a highly modified turbo’d FWD - where inevitable wheelspin is actually turned into straight line acceleration.

But in terms of driving dynamics the LSD changed it completely, actually tightening up your line towards the apex, instead of understeering towards the outside, and being able to put power down when you want.

Regarding getting away with ‘better’ tyres - i’m not sure about a straight line drag. But a friend with a proton Satria gti (N/A still) went from NS2R’s to AR1’s to try to quell the inside front from spinning up in tighter corners on the track and he found he was still breaking traction. The dynamics I presume are just against you and or we’re just not skilled enough to keep the weight on the fronts via trail braking or perhaps the suspension isn’t setup. In anycase the LSD is a sledgehammer to solve part of that problem as if the inside front does break traction your being pushed around by the positive drive from the outside.

I’d say a good setup for your car would be a EJ box with copen final drive and a lsd from Compact Motorsport. Much like @TPG has said above. Definitely not cheap, especially with custom driveshafts, but that would change the car a lot.
Much cheaper option would be l2 Trxx factory lsd setup, but it would be hard to find.

For a brake upgrade, facelift m100 sirion setup. The difference is 23mm bigger in the front and 15mm in the rear. You would be changing to 4x100 hubs by doing this, which would open up more wheel and tyre options.
There’s some good disc and pad options for the sirion too, although even standard stuff would be heaps better than stock mira gear.

a few of us have done the 4x100 conversion b4 and it is good and braking is soo much better than stock. I had it on my move and when we had track days (qld) at lakeside. I could go so much further towards a corner b4 having to brake (atleast a k-car length). That was with standard pads. My current mira has a 4x114.3 setup on the front with suzuki brakes and pretty much stock mira brakes on the back (I had rear disc on the move) and it’s braking is awesome also.

Definitely gotta try out LSD for mine. If I can’t get Rob’s I’ll probably just import one from Compact like ya said.

I will have to suss your sirion brakes to get my head around everything I need to do and buy to have the set up on mine!

Ideally the end goal will be 100hp at the front wheels, lsd upgraded brakes and somewhat reliability. That’s the plan anyways haha

Any more on this? I’m interested to see if you managed to get an LSD to work?