The origins of Daihatsu dates back to 1907 (Meiji 40). In order to domestically produce the engine which was dependent on import at the time, scholars and engineers at the time of the Osaka High School of Engineering (currently the Osaka University Faculty of Engineering) became the center, and “Osaka Motor Manufacturing Co., Ltd.” was established in Osaka did. Beginning with an intake gas engine, we developed and produced compact diesel engines, etc. In addition, at that time we also had equipment for railway cars. Due to the turbulence caused by the Great Depression, the demand for three-wheeled vehicles (auto three wheel) has increased in factories and logistics companies. Our company, which was an engine manufacturer, began voluntary production of automobiles for the first time in Showa 5 (1930). Its name is “Daihatsu”. The small tricycle that was nicknamed “Daihatsu” at the time, which combined “Osaka’s” large “and the engineering” starting ", gained great popularity. We changed our company name to “Daihatsu Industry Co., Ltd.” in 1951, and celebrated its 50th anniversary in Showa 32 (1957) at the dawn of motorization. The light tricycle “Midget” that was released this year has gained popularity in ease of use and economy, a big hit among shops and retailers. It was exported to many countries such as Indonesia and Thailand to support people’s livelihood. Daihatsu Motor Co., Ltd. (ダイハツ工業株式会社) is the oldest Japanese manufacturer of cars, known mostly for its smaller models and off-road vehicles. Many of its models are also known as kei jidōsha (or kei cars) in Japan. Its headquarters are located in Ikeda, Osaka Prefecture.

The name “Daihatsu” is a combination of the first kanji for Ōsaka (大) and the first of the word “engine manufacture” (発動機製造, hatsudōki seizō?). In the new combination the reading of the “大” is changed from “ō” to “dai”, giving “dai hatsu.”

Daihatsu was formed in 1951 as successor organisation to Hatsudoki and, by the 1960s, had started exporting cars to Europe, although it did not enjoy any major sales success until well into the 1980s.

Since February 1992 in North America, it has been common for Toyota to distribute Daihatsu models.

In January 2011, Daihatsu announced it would pull out of Europe by 2013, citing the persistently strong yen which makes it difficult to turn a profit from its export business. Daihatsu’s sales in Europe had plummeted from 58,000 in 2007 before the financial crisis, to 12,000 in 2011.

Daihatsu was an independent auto-maker until Toyota became a major shareholder in 1967 as the Japanese government intended to open up the domestic market. According to Toyota, it was first approached by Sanwa Bank, banker of Daihatsu. In 1995, Toyota increased its shareholding in the Company from 16.8 percent to 33.4 percent by acquiring shares from other shareholders: banks and insurance companies. At the time, the Company was producing mini-vehicles and some small cars under contract for Toyota. Toyota, by owning more than a one-third stake, would be able to veto shareholder resolutions at the annual meeting. In 1998, Toyota increase its holding in the Company to 51.2 percent by purchasing shares from its major shareholders including financial institutions.
In January 2011, Daihatsu announced that it would pull out of Europe by 2013, citing the persistently strong yen, which makes it difficult for the company to make a profit from its export business. Following the financial crisis Daihatsu’s sales in Europe went way down. In August 2016, Daihatsu became a wholly owned subsidiary of Toyota Motor Corporation.

Daihatsu Midget Model DKA, 1957
1907 – Hatsudoki Seizo Co., Ltd. founded
1951 – Company renamed: Daihatsu Motor Co., Ltd.
1963 – Introduces the Daihatsu Compagno which utilized multiple bodystyles on one platform.
1967 – Starts cooperation with Toyota Motor Corporation
1971 – First generation of the Daihatsu Delta Truck model launched in Japan, a Toyota influenced four wheeled six ton cargo lorry.
1975 – Begins to supply diesel engines to the SEMAL company of Portugal for the new PORTARO 4X4 offroad vehicle series.
1987 – Daihatsu enters the US automotive market with the Charade
1988 – Daihatsu introduces the Rocky and Charade in the US market
1992 – Daihatsu shuts down US sales in February and ceases production of US-spec vehicles
1998 – Toyota gains a controlling interest (51.2%) in Daihatsu Motor Co., Ltd.
2011 – Daihatsu states that sales of Daihatsu motor cars will cease across Europe on 31 January 2013
2011 – Daihatsu invests 20 billion yen ($238.9 million) in Indonesia to build a factory that produces low-cost cars smaller than the Toyota Etios which was launched in India in December 2010.[7] The construction has been initialized on 70,000 square meters in May 27, 2011 and will start operation at the end of 2012 for producing 100,000 cars per year[8]
2016 – Toyota purchases Daihatsu’s remaining assets, and therefore makes Daihatsu a wholly owned subsidiary[9]

The eleven Daihatsu concept cars at this year’s Tokyo motorshow 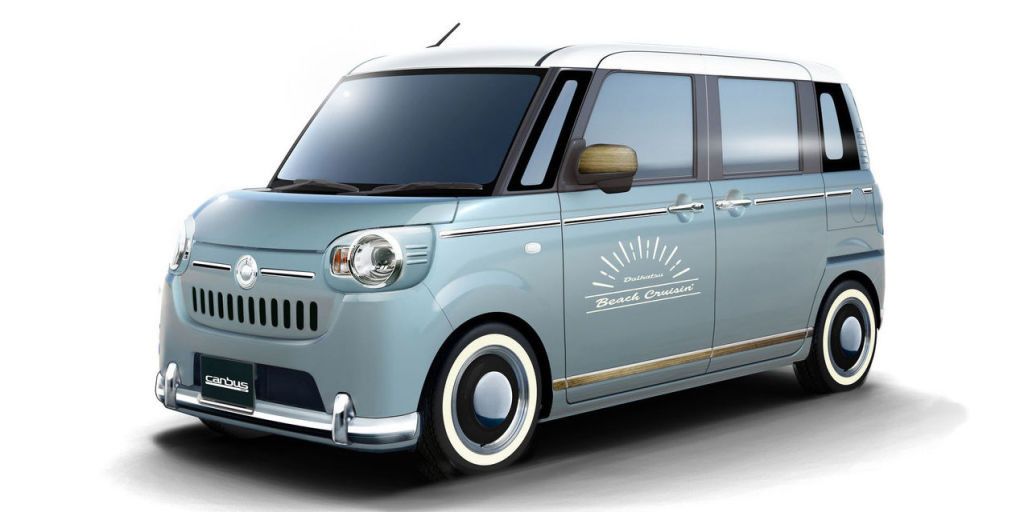 Get ready for some highly customized kei car action.

The Daihatsu Group has production plants * 1 at four sites in Japan (Ikeda, Shiga, Kyoto, Oita), and overseas in two countries (Indonesia and Malaysia) .

What is indispensable in making mini vehicles mainly produced at domestic factories, it is to make high quality and cost reduction to deliver good goods to our customers at an affordable price.

The key to realizing these is “SSC (Simple Slim · Compact)” which is the original concept of Daihatsu.

From the doubt that “Is it the same size as a factory that creates a big car … in order to make a small car …?”, We focused not only on making cars but also on factories that create cars.

Just a quick look into the biggest KW/HP Daihatsu engine brought up this, the DKM series V16 Of course all of these are ship engines

A well set out Dauhatsu history