Since a few days I noticed a sound coming from the right front side of my sirion (m300). It gets louder when taking a corner (sounds a bit like: “Duga Duga Duga” and when driving straight you can also hear it faintly. I jacked up the car yesterday and the sound seems to come from the gearbox. I wish I could upload a video I took of it but i don’t exactly know how to upload. When I put the car in gear you could hear a “klunk” coming from around the driveshaft near the gearbox. When I put the gearbox in neutral you could hear the sound when the driveshaft was engaging (there is always some play on the shafts). I also noticed that when I start driving in first gear and when changing to second gear you could hear a “klunk” when engaging the clutch. That klunk stops when you drive some miles.

I know my story doesn’t really make sense. And I know its difficult to decide what I could be over the internet but i was hoping that someone could tell me what I could check to determine if it is the driveshaft, gearbox or something else. I already checked the wheel bearings and they don’t seem to make any noise and the noise seems to be coming from the gearbox.

Any ideas? And could someone explain how I can upload a video of the sound?

I’m sure there is someone else who has more experience than me, but I think it might be a CV joint (homokineet in Dutch). You can check if the CV boot is torn, which might’ve caused grease to come out and wear out the CV quicker. By turning the driveshaft by hand, back and forth, you can see or feel if there is any play on the joint.

Again, I’m not really familiar with these things, but it might help

at a long guess I would narrow down to cv or drive shaft or maybe even a worn engine mount. That would be my guess.

CV-joint was the word I was looking for! Any idea how much play there should be? Just a tiny bit of movement?

Never replaced something on the driveshaft of CV joint so this will be a first. Thanks for the replys I’ll check this weekend

Okay thanks for the tip. Since this car has many, many more problems I won’t keep it it forever so i prefer cheap and easy above quality. I guess I need to replace left and right simultaneously since in the right side is worn out, left will probably follow soon right?

I’m currently nearing the end of my graduation so I’ll probably start replacing them at the end of July. When I do replace them I’ll make sure to take some pictures and make a how-to

was quite an easy job. 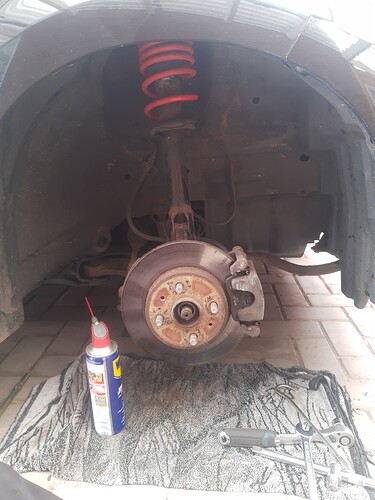 IMG_20210705_1112187123000×4000 2.75 MB
First removal of the wheel. Protip, leave it on and place the car on the ground in you want the big nut to come loose. I had no success so I went to a local garage and they brought out the big ugga dugga. Even with the full weight of the car on the wheel while on the ground I was still spinning the wheel when I tried to remove the nut. Even the small ugga dugga wasn’t able to get it loose.

After that I removed the strut to gain a bit more acces to everything. 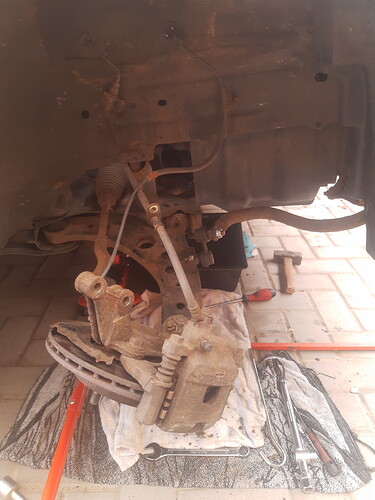 After that I tapped the old drive shaft out of the knuckle. It was a pain in the behind to remove the driveshaft from the gearbox. I removed some shifter linkage to gain a bit more acces and with the help of a big screwdriver and allot of swearwords was able to pop it out. After wich I was surprised by the amount of gearbox oil (around 700ml) that came out of it. Let’s just say my hair smells like old dinosaurs now.

Installation of the new one was a bit tricky as I was afraid to push it in. I was being to gentle and after some hard pushes it slid right in. Reinstalled everything and filled the oil back up. 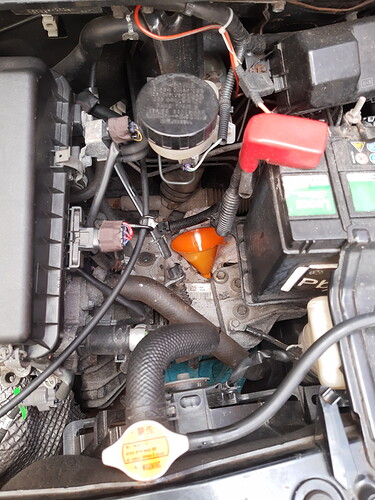 Apparently I had the wrong oil so i had to get some new fresh one. But the car wasn’t driveable, my bikes are al in need of repair and I only have a scooter left on which the plate was suspended. So i took the scooter on a nervous 10 minute ride to the local part shop. In the Netherlands if you drive with a suspended plate you’ll be in allot of trouble if you get cought so i was happy to be home. Only to find out that 1 liter wasn’t enough. Since only 700ml came out I thought I was in the clear. So another 10 minute ride later I was back again.

I paid more for the gearbox oil than a second hand drive shaft but it was worth it. I hope. Thanks again for the advice all

Oh and yes, there was some play on the inner CV-joint of the old one.