Hey guys need some advice.
Finally got the Hijet wired and running!
However i am now having trouble with the notorious surging idle problem. I have bled the coolant system relentlessly to no avail. I had to bleed the system using a retrofitted hose from radiator to a bucket that was higher than the heater core (the heater core is way higher than the radiator as its in the cabin). No more bubble seems to be coming out after running it for like 30 min and its still surging

.
Are there any other factors that contribute to this idle issue? FPR is set to 43psi so i don’t think its fuel related. and the engine was running fine in the donor car so I’m stumped.

Should i keep bleeding? Buy a swirl pot?

Any advice would would be awesome - Thanks heaps!
will eventually do a write-up about the full build when its running mint

did it go through at least 2 heat cycle’s? That is what I usually make sure of. All vacuum lines hooked up ok? coolant line’s in the throttle body all clear?

yep have done 3 heat cycles, here are the vacuum lines that I have hooked up. One to booster, one to throttle body, one to valve cover, one to fpr and the last is to the hijets air box that actuates the diff locks (i blocked this one off to check and still no change) And yes the coolant passages are not clogged. I might get some soapy water to check for any vac leaks. 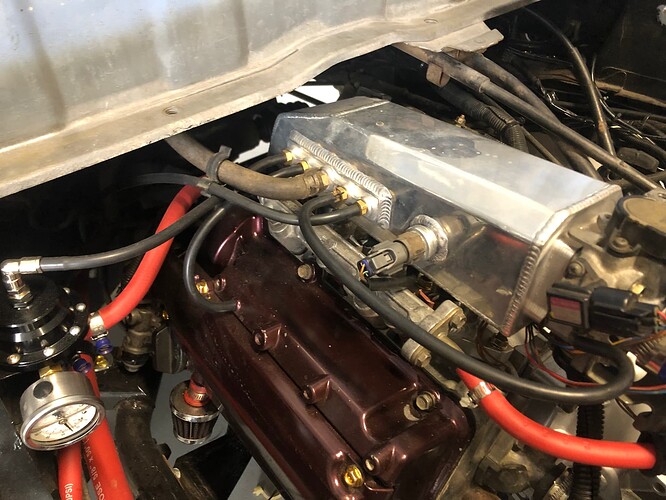 Have ordered a swirl pot to hopefully fix the issue. I will take out the heater core and braze a fitting to it so i can connect it to the swirl pot as its the highest point as i think this is where the air is getting stuck. I will also mount the swirl pot under the tray above the manifold. fingers crossed

UPDATE - Decided to block off the heater core temporarily to eliminate one possibility at a time. I also took off the throttle body to clean all three sensors. Put the throttle body back on and its now idling perfectly! I will still install the swirl pot when it gets here as i will place it where the service hole is on the tray to make servicing a bit easier.

Side note
If your taking apart and cleaning the ivac, the rubber seal will most likely be way to big to go back in. Boiling the seal didn’t even work. the only seal i could find was this Toyota one as it looks the same and carries the same first 6 part numbers as the Daihatsu one… weird. I didnt want to wait a month for it to get here so i just lubed it up, lined it up as best as i could and then tightened all 4 bolts down as slow as i could (pushing it with a small flat head as i went) making sure not to pinch the seal - And it worked!