Hello friends! I got a question about this on Facebook, and since I’m a total nerd and already made a few graphs, I decided to make a little post, for those of you who are interested. The data I got is not super accurate, but it’s good enough to show the differences. Based on the numbers and graphs, they perform a lot like you’d expect.

*By K3VE-1 I mean the first version. There was an update for the Sirion 2 facelift, where the engine got a 3SZ cylinder head. Peak torque is the same, but this time at 4400rpm, which resulted in a higher power output (91hp).

Looking at those figures, you’ll see that the K3VE2 and the 3SZ look kind of similar, but they are not. Peak torque occurs at the same rpm, both have (virtually) the same power output, but you’ll see that they have different characteristics. I always think of the 3SZ as a combination of both K3’s, and here’s why: 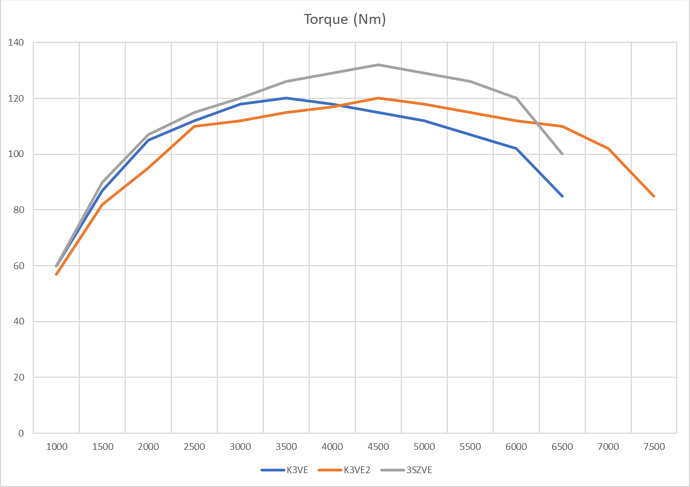 image1245×880 41.7 KB
Notice how the K3VE and 3SZ have similar torque figures up until the K3VE hits peak torque. This graph also shows that both K3’s basically have the same torque curve with the same peak torque, except that the one from the K3VE2 is spread over 1000rpm more. 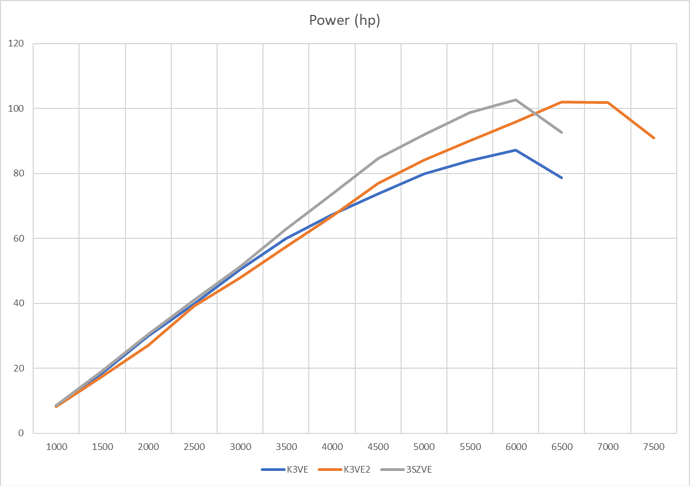 I’ve owned cars with all three engines, but unfortunately, I’ve only driven two of them, both in different cars. But, I think it’s enough to draw conclusions. I drove a Sirion 1.3 for a while, which gave the opportunity to experience the K3VE2. Although I think the engine’s state was questionable, it still seemed to perform fine. Below 4400rpm, there was enough torque, but no more than that. Above 4400rpm, it starts to come alive a bit more (VTEC just kicked i- no wait), but apart from doing quite a lot of revs, it didn’t feel as dramatic as I expected.

The other day, when I had a passenger, I experienced/noticed how weight plays a significant role on these cars. An 80kg passenger on a 700/800kg car, is an increase of around 10%. Keeping in mind that stock Sirions are about 120kg’s heavier than stock L7’s, combined with the bigger wheels, is probably the reason why it didn’t feel als spicy/fast as my 3SZ Cuore. That may sound very obvious, but when I got my own car back, I was shocked by how much quicker it felt.

Whereas the K3VE2 has “enough” torque in the lower revs, the 3SZ has plenty of torque. It doesn’t matter which gear you’re in, it will pull. In my opinion, it performs best at mid-range, half throttle. Flooring it mid-range doesn’t do all that much, which is fine for me. It’s not a fast engine, but if you’d floor it from the start and rev it out, it can be quite quick. To me, this is what defines the difference between the two engines. The 3SZ is an engine that encourages to let the torque do the work, whereas the K3VE2 encourages to rev it out and let the power do the work. @Roffelkut , who built a K3VE2 Cuore, drove my car, and (after hitting the limiter), he concluded the same. He also found that the K3VE2 performed better (powerwise) in the higher revs, which makes total sense. He built his car for the track, I built mine as a daily/B-road cruiser, and I think we both chose the best engine to accomplish that. In my eyes, this shows how peak power doesn’t tell the entire story.

As for the K3VE, I think it would perform a lot like the 3SZ in daily use, but would lack power when you’d floor it. In essence, the 3SZ is just a big K3VE with a bit more spice, and a bit more potential.

Once again, not a very accurate comparison, but I think it’s enough to show how the engines appear to be similar, but turn out to be quite different.

I really liked your post :), From my experience I would add a couple of comments:

If the 3SZ turns out to be as strong as the K3VE2 I’ll stay with it, but gossips say that it fail more, we would have to see what happens.

I “raced” my m300 1.3 (K3-VE) against my dad’s m300 1.5 3SZ. To be brutality honest, we both didn’t really see that much of a difference. He pulled away centimeters at a time. That despite my engine is way more abused by the previous owners (as is the whole car). I can confirm that the 3SZ is better at half throttle and the enige is smoother and feels more capable in my opinion.

I wonder how it would feel if you would turbo it. I think it will be amazing for about 5 miles before the gearbox decides to leave the party.