I know, an other k3ve2 conversion. But I would like to share the built. I bought this car like 2 months ago and the original idea was to keep it a bit longer with the ej, but there was a good opportunity to buy the hole parts for the conversion for a good price and I went for it.
I read a few conversions threads here, so I hope I’m ready to do it with mine.

The car has to perform good as a daily and on the track.

As I think, I have to use the suspension and the axles from the Cuore. The wheel hubs and brakes from the Sirion.

I’m going to pick up the parts in 2 days, then order a few maintenance parts and prepare the engine for the swap. 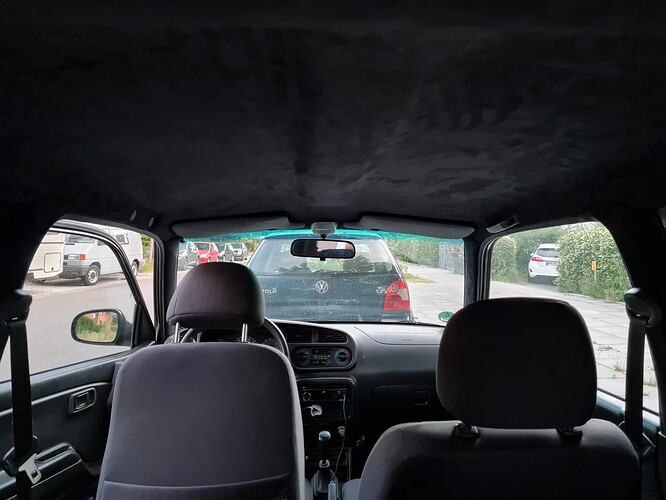 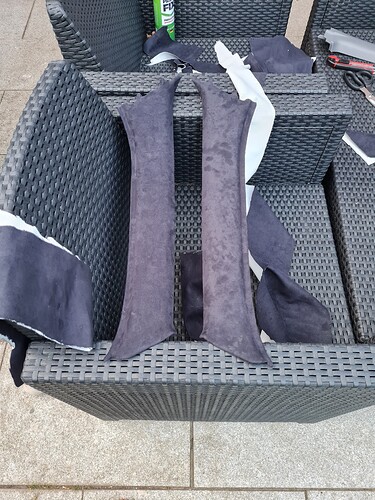 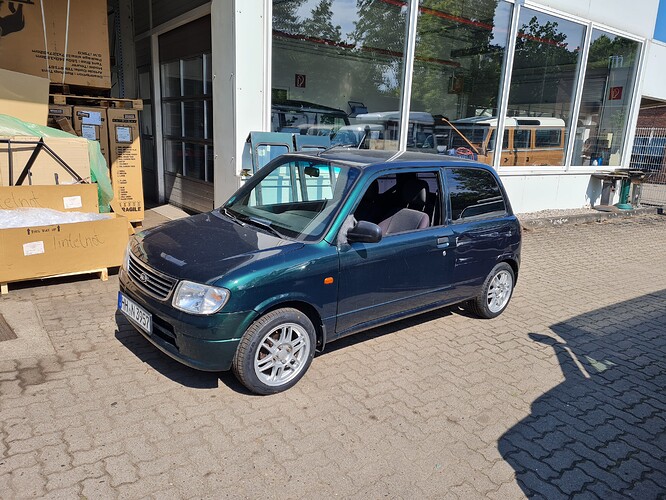 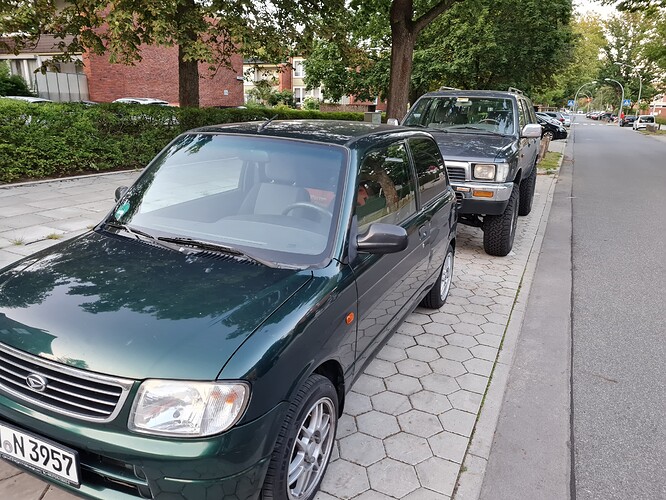 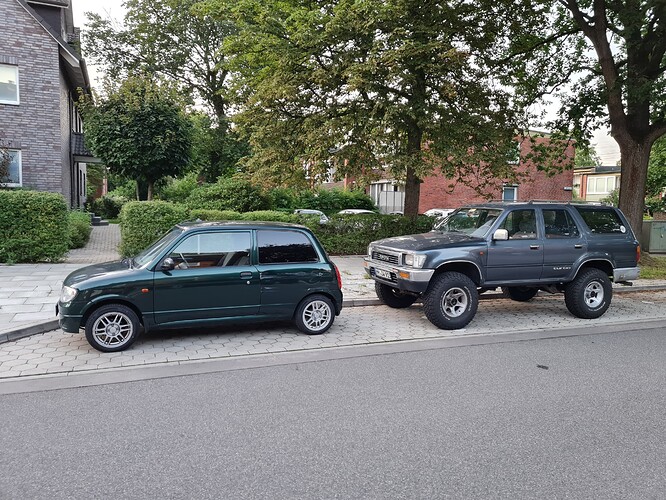 When fitting ABS, you’ll need different brake lines (or adapt the ones you have already), and you need a different brake cylinder, since the ones with ABS have 2 brake line exits, instead of 3 like the non-ABS ones. You’ll also need different steering knuckles and rear brakes because of the ABS rings and sensors (which will probably come with the parts you bought), which also means you have to swap/adapt the rear wiring loom, in order to include the rear ABS sensors.

Fitting the power steering pump is possible, but you’ll have to cut off a tiny bit of metal on the beam that holds the top of the bumper and radiator (you know, that rusty piece of crap that sits in between the headlights)

When the Sirion frame is in, you won’t be able to use the Cuore swaybar (because it won’t reach the lower control arms). You can either use the Sirion swaybar by bending it inwards until it fits, or source the swaybar from a Copen.

Everything is manageable, but I think it’s useful information to have before you start swapping engines, instead of bumping into those things when you don’t have the time to deal with it. If you need any help, you know where to find us! Good luck, and I’m hoping to see everything come together nicely

Thanks for the advices! The brakes are complete as far as I know. Master cylinder, lines and abs valves and other bits.
The wiring harness should be also complete from the Sirion, so that shouldn’t be a problem.
I’m going to use the sway bar from the Cuore, because Copen’s sway bars aren’t so easy to find.

Where I’m not so sure, is about the steering knuckle. My idea is to use the one from the Sirion, but I’m not sure if the cv from the cuore are compatible. 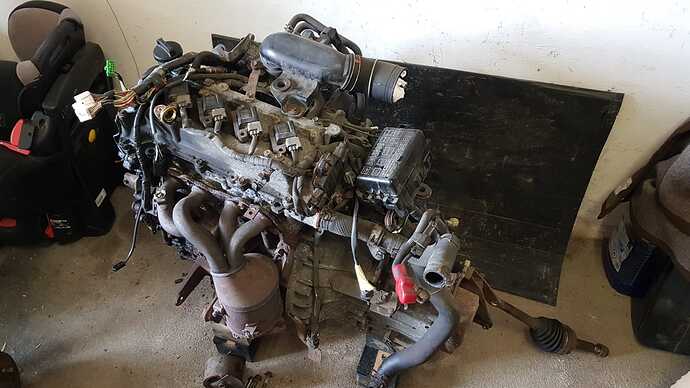 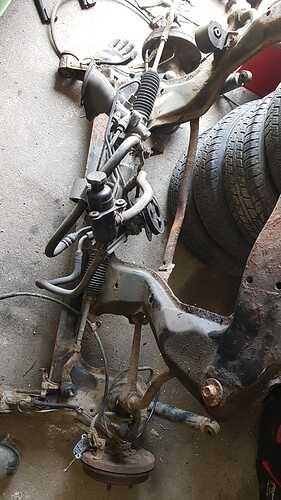 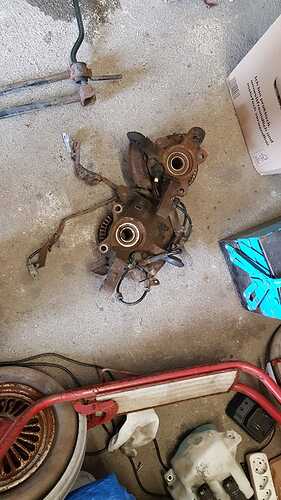 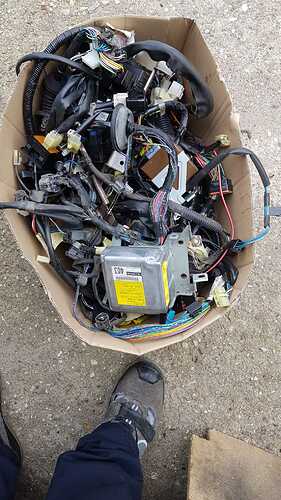 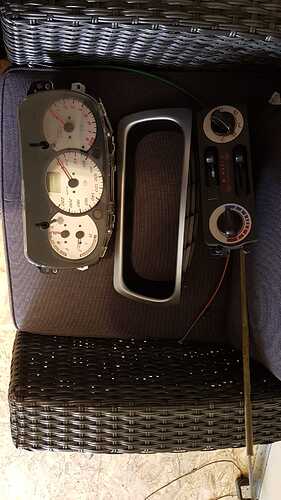 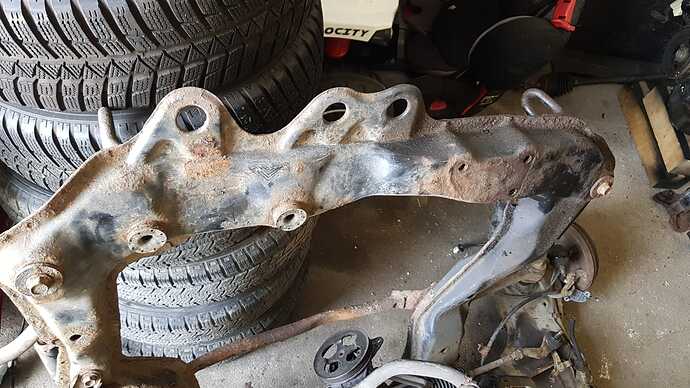 Again thanks for the help Blyatsu. I’ve already learned a lot from your Cuore

Looking at the pictures, you should be alright with the brakes! The steering knuckles are the same as from the Cuore, but these have ABS rings (which you will need). These knuckles can be mounten without any issues and are compatible with the drive shafts.

Once again, I’d like to emphasize the ‘problem’ with the swaybar. The Sirions subframe is a bit longer (from front to back) than the Cuores subframe. This means that the swaybar is mounted further to the front as well. Because of this, the Cuore swaybar is too short to reach the lower control arms 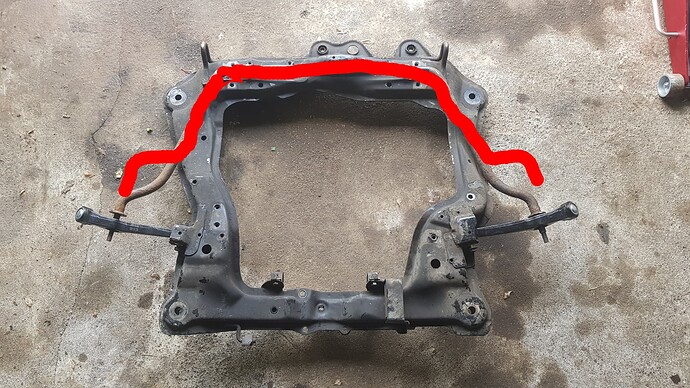 Excuse my poor drawing, but I hope you get the point. The swaybar is shorter, so it won’t reach the LCA’s. Please let me know if you need further explanation, I’m happy to help.

I didn’t knew about the sway bar. I see there 3 options.

I think, I would have to make 2 brackets to use the original sway bar and wait until I found a Copen’s sway bar.

I think that should work. 4th option is to fit the Sirion swaybar by pulling together the ends with a tow strap

Also, don’t forget to fit L7 tie rods to the Sirions steering rack! Or you’ll end up with massive toe in

Updates… I picked up the engine. During these week I’m going to work on the subframe and order a few parts. I’m going to replace the clutch and brakes. Clean some parts.
The idea with the strap could work, not so sure if the bushings are going to resist. Thanks for the idea!

Where did you get the Copen swaybar though? I cant find anything on the internet and I am in need of one as well^^

Could you recommend me some sites to look for one?

I got lucky and found one on a junkyard nearby. They’re pretty rare in the Netherlands (and I’m guessing Germany is no different), so that’s pretty much the best and only place to search for. Over here we have this site called onderdelenlijn.nl , on which junkyards can put their cars and parts for sale, but I don’t know if there’s a German site like that. I think ebay kleinanzeigen has the most parts (but I’m not that familiar with German websites)

Yea, found one in the Netherlands on proxyparts and paid 125€ for the stabilizer and 74€ for shipping to Germany

At least I can get one step closer in finishing the swap. Can’t wait to drive it on the road.
I just hope the thread creator won’t have any issues getting it over TÜV/MOT so we have one more german K3VE2 Cuore

Yeah that sucks, they’re mega expensive and shipping is a pain in the butt as well

Btw, didn’t they register this one? 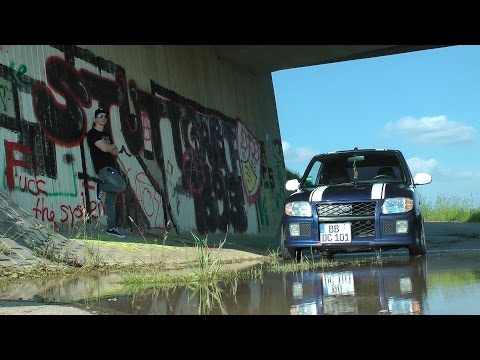 Yes they did! They also got a K3-VET swapped Cuore L7 road legal here in Germany. I contacted them where they went to to get it road legal or if they can give some advice how to increase your chances in getting the swap road legal. Apart from these guys we also have at least one more K3-VE swapped Cuore with 86 hp driving around here legally. This person sourced his parts from a Copen and drove Slalom with his Cuore. Here is his insta: Login • Instagram

On a sidenote: They tried to sell the K3-VET swapped Cuore L7 last year to no avail. They wanted ~7.000€ since it cost them a lot to get it road legal and they have one of the rare manual transmissions for the engine.

Yeah I saw the video on the K3VET, pretty cool!

What transmission do you mean? The manual transmission from a K3VE(2) will bolt on without any issues, but the problem is that the clutch will slip in 3rd/4th/5th gear, or it will break them if you have the right clutch. I don’t think there’s anything special about their gearbox (but I’m excited to be wrong

Ok, it’s been a few weeks and not so many news on this side. I built the new front brakes. I used the wheel hubs from the Sirion and the steering knuckles from the cuore, because those were in better shape. I just drill the holes for the ABS sensor. I’m going to mount the rear brakes this week.
For the engine, I’m going to wait a few weeks, maybe months, because I must first register my 4Runner like Old Timer here in Germany (cheaper taxes for over 30 years old cars). So that’s my priority this month.
Then I’m going to make new inspection before the engine swap on the Cuore, because I’m not sure how would it take to register the new engine here in Germany (everything to complicated) and with new Tüv I have 2 years to register the engine.
I’m going to try to keep the car without ABS. Let’s see what the inspector says. 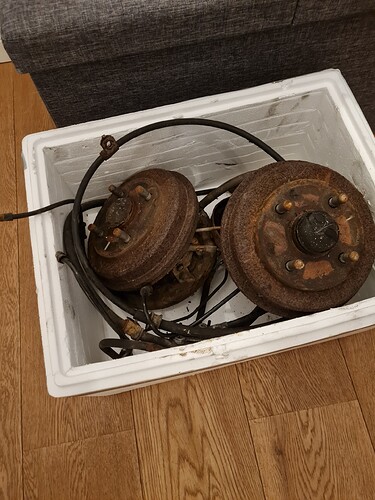 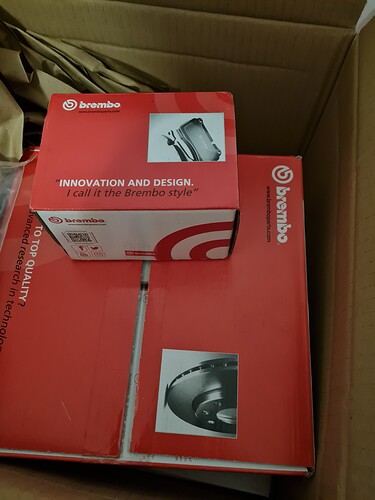 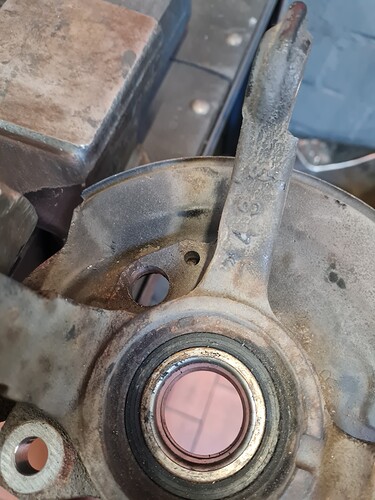 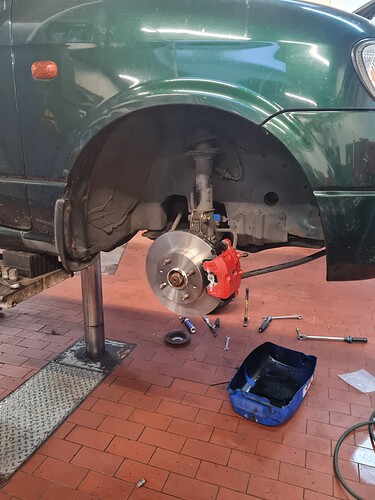 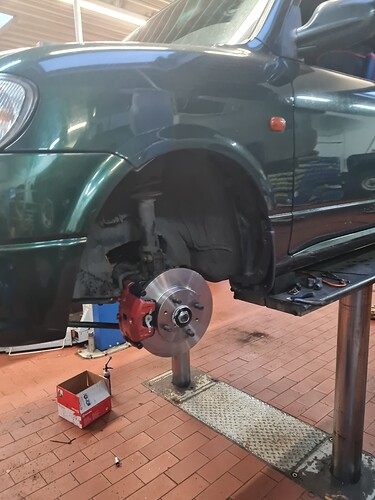 If you still are in search for the engine or more like the kei-frame with the whole engine assembly I can sell mine to you. I’m gonna abandon my build and gonna sell the parts away. So if you’re interested, I have all the stuff you need for the K3VE2 swap lying around, also the Copen swaybar which is needed

Hi, I have already engine and subframe, but I could need the Copen’s sway bar.
How much do you want for it?

OK, time has been a problem this days (too much work and I’m going to be father in around 2 months). Last week, on Monday, I cleaned and paint the subframe, mount the engine and steering rack on it. On Wednesday I installed the new wire loom, I’m almost ready with it. I just have to install the rear loom and abs sensors.
Thursday was a hard day. I dismount the engine, and with the engine outside I installed the abs pump and lines. I hate doing brake lines. I worked until 10:30, with the k3ve mounted, suspension and steering done. 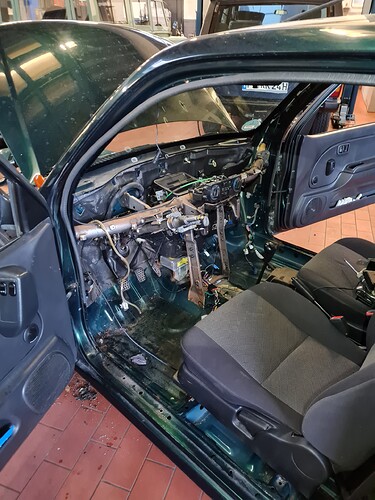 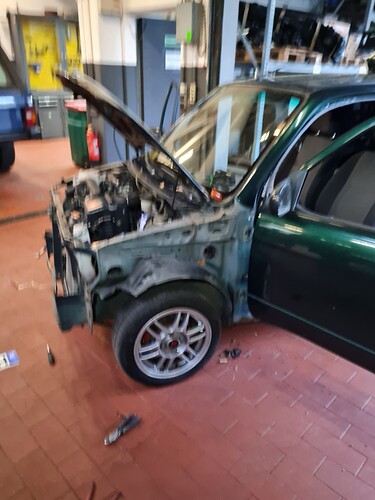 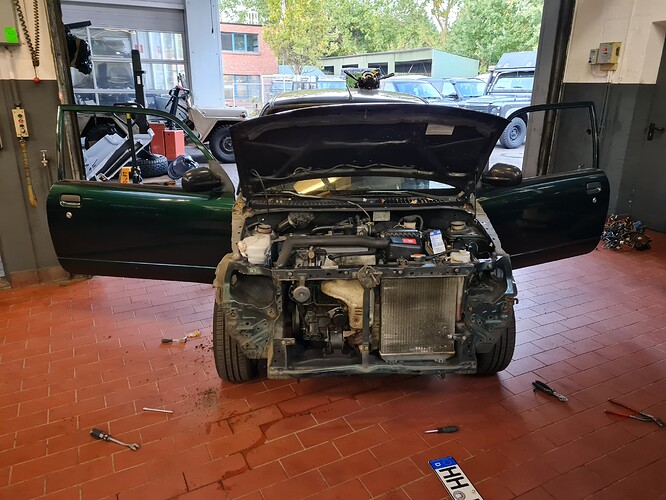 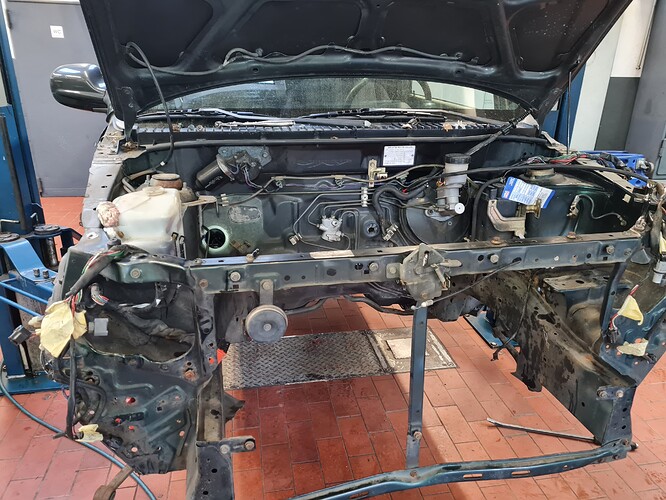 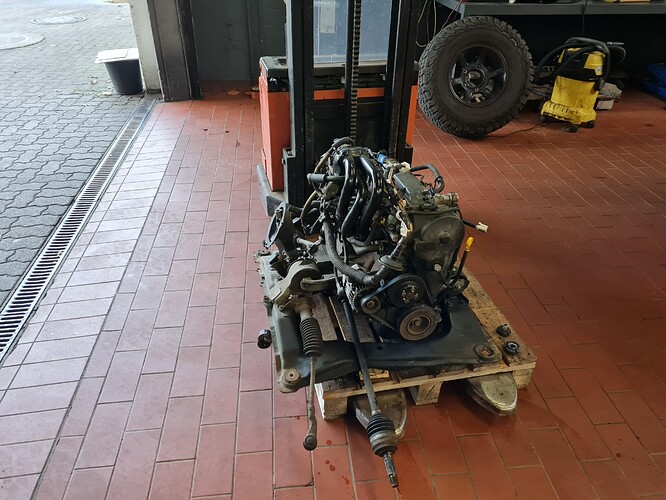 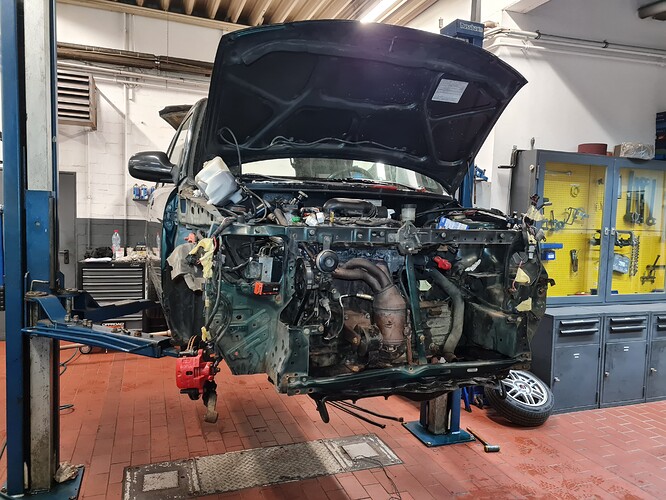 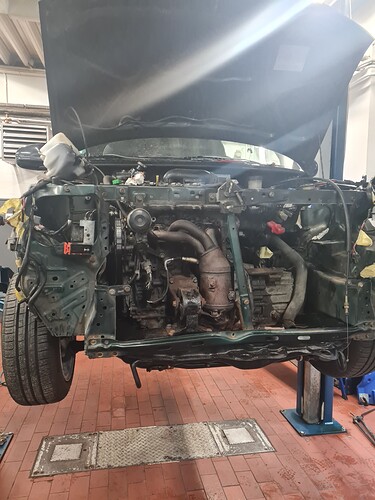 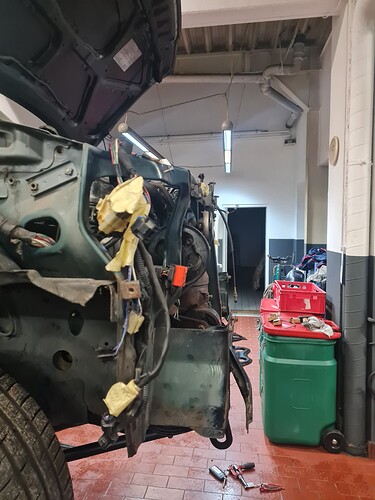 Hi everybody, it’s been quite long time since I finished the engine swap and I haven’t make an update.
My son was born in December, and time to do some work on the car or posting was difficult to find.
To the car now. I managed to finish the swap the 20th October and since drives very well. I had some issues at first with the wiring of the O2 Sensor, and the speedometer was out of range due to the smaller wheels. For the speedometer, I bought a speedo corrector from aliexpress. It works fine, but it doesn’t read for the first 3 seconds after every start. It’s a bit annoying, but I can live with it for the moment.
ABS and power steering are working great after almost 5.000km since the swap.
Uploading: 20211020_184903.jpg…
Processing: 20211020_184908.jpg…

I bought 2 front YRV seats for the cuore. They fit bolt on, but they are a few cm taller from the supports. I managed to cut the originals from the cuore seat rail and weld them into the YRV seat. The seats are very nice and comfortable. Why YRV and no Sirion seats? Because the Sirion seats are very difficult to find and I paid 20€ for the 2 YRV seats

I also managed to repair the quarter panel (I bought the car sight unseen and then I realised how bad the damage was) . It’s not perfect, but better than before and I spend only 30€ on materials. I have to polish it now. 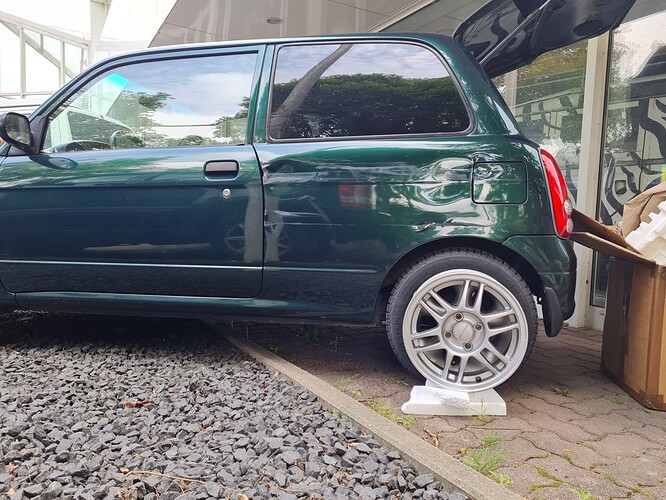 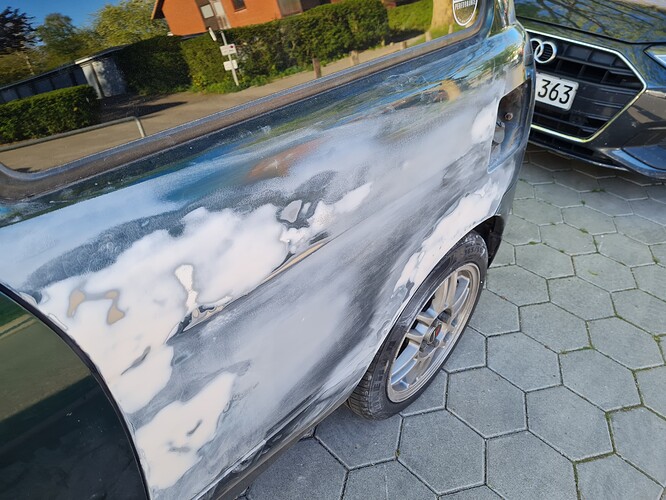 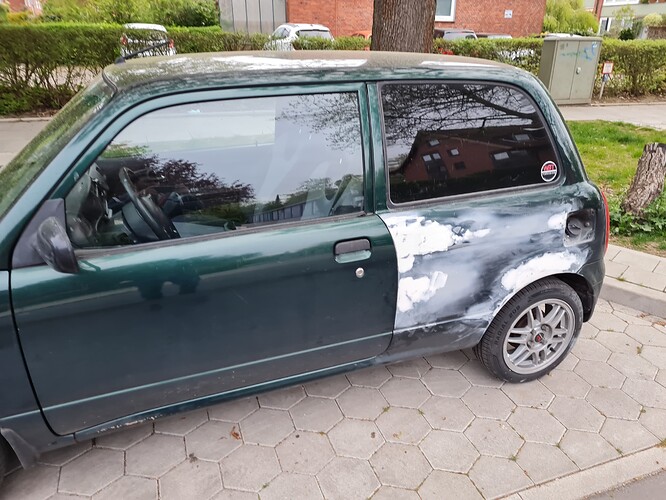 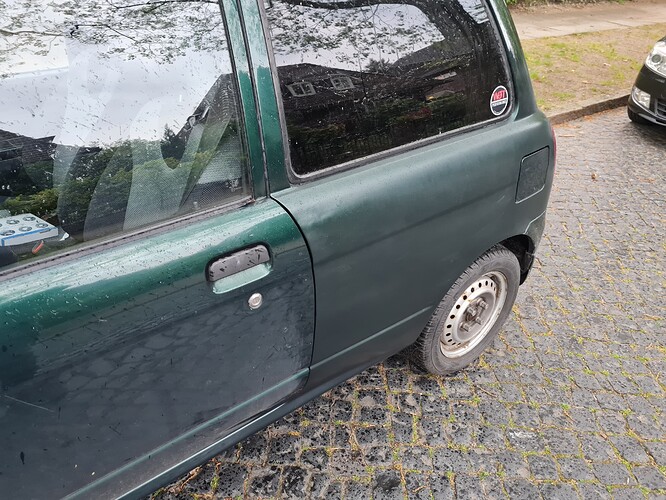