Things are about to serious with my L500

I bought this thing around 18 months ago, cleaned it up, lowered it, rebushed the front end and install Copen seats. I then proceeded to thrash the living shit out of it over the Anzac bridge and back to work. Couldn’t break it and its still going strong. But now its time to make it fun.

I’ve recently moved back down to Melbourne so I sent it back on a truck. My brother recently started a car wrecking business and my mechanic father is retired. So I have a total of two mechanics, a hoist and a retired aerospace engineer who is brilliant at fabrication at my disposal

It’s my preference to keep things legal and un-pickable as possible. If its intercooled for example it wouldn’t be a front mount. I want to avoid cutting as much as possible and left it looking dog bar bones stock.

A couple of engine options currently being thrown around are the obvious ej-de 1l bolt in. Obviously rebuilt and turbo ect with the appropriate fuel upgrades plus ECU. I wondered though if potentially the GTVi 1.3 motor is any chance of fitting? Has anyone tried this or no what is involved. I would potentially leave that one NA but I have no idea of what is required or if it would fit. Happy to build custom mounts ect but I don’t want to cut out the wheel wells and make it obviously illegal or build an entire new K frame for it. Another option I’ve considered which I just think would be brilliant (although not easy) in the 990cc copen turbo engine. I like the idea of sticking daihatsu but again, so much newer and so many unknowns I dont think I would be brave enough unless someone else had already had some success. While discussing 1.3l options and inspired somewhat by the mightcarmods jdm mini, would the 1.3 honda b-spec fit? That would be insane.

First step is to get rego converted to Vic before I touch it, from what I can tell its already roadworthy but we shall soon find out.

Another crazy option being thrown (and would likely happen if it couldnt be registered for some reason) is to put the 1000cc Fireblade motor we have lying around in back to make an insance daihatsu go kart.

Some pics to get us going here: 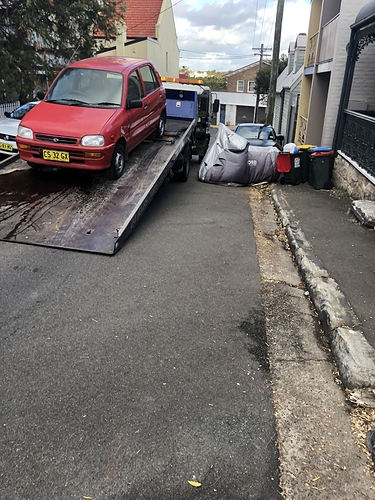 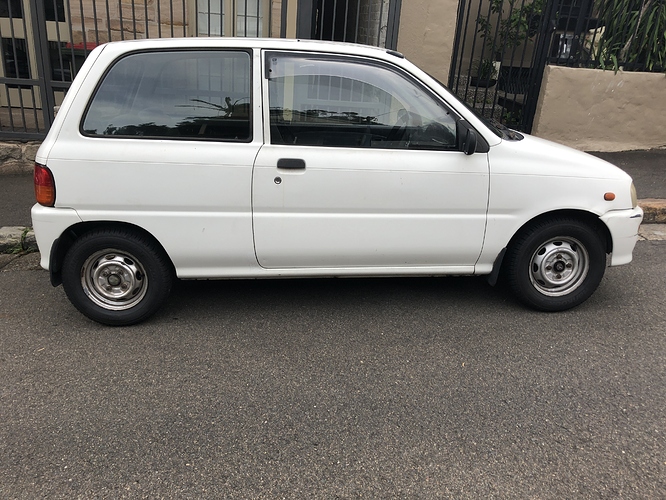 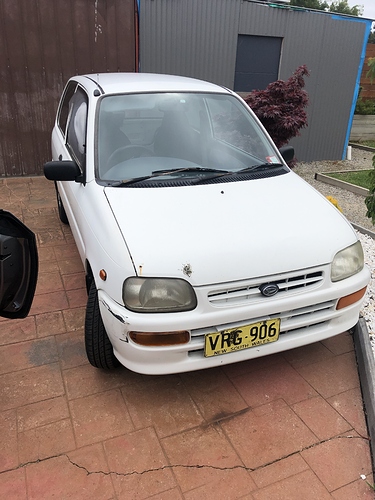 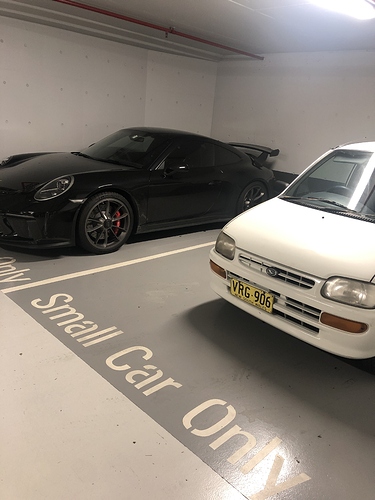 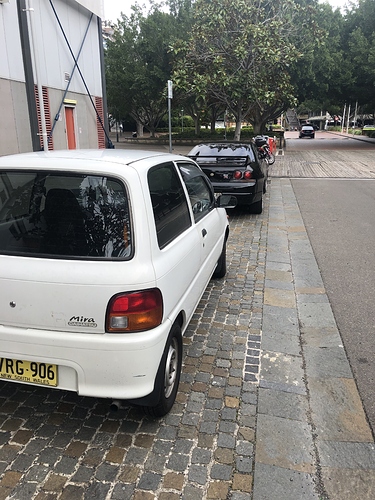 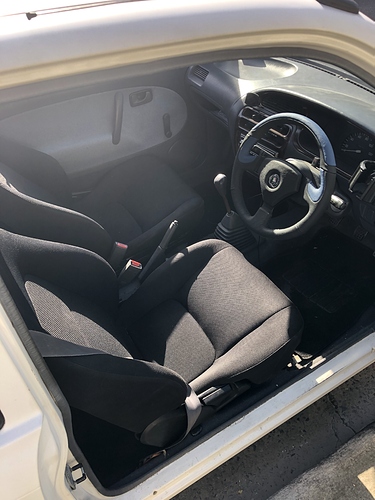 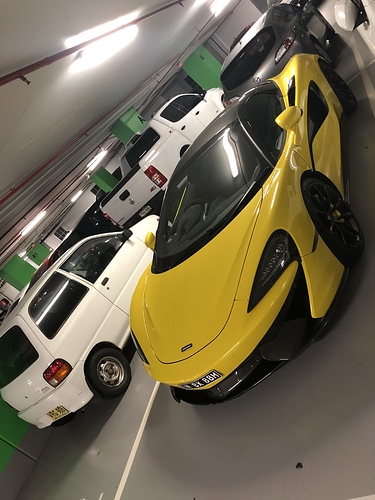 Yes K3VE has been done. Big job and lots and lots of fabrication. I don’t think it is the right way to go. EJDE with a bit more compression and some tweaks and keep the car light and balanced. If you think you need to drag race then add turbo. The best balanced and most driveable without standing out is NA EJ-DE and it won’t take long. Spend more time driving and less time mucking around.

I agree with Mr G here. Bang for buck and a good street performer without being over the top is the ejde. K3 is a huge job and lots of fabrication and only just squeezes between the rails. the k frame needs mods as well as mounts etc etc etc.
Another alternative you could look at also is a jbdet from a copen so you still keep the 660 but with the turbo they go very well. the copens go welland in a car that weighs ablut 200kg less it will be even better. jbet is more expensive but another reliable choice as well as the ej.

To add to this.

The JB-JL from a move however will “bolt right in”, revs higher but is not quite as smooth. The JB-JL is a common engine swap for the L200/L500 in Japan and Malaysia

K3 is the same as in regards to the gearbox with rod linkage and the key, key reader, immobilser and ecu.
jbjl is very possible the reason I didnt mention it is every jbjl I have heard or known of in australia has suffered from engine failure mainly rods bending or breaking through the block. I have not heard this at all with the jbdet and thus why I said the jbdet.

as far as I know the JB-DET and JB–JL have the same block,rods,crank although a slight difference in oil galleries.
I could be totally wrong on this though as I have never visually seen this but from the research when I did the conversion.

The JB-DET is a very fun engine, nice and smooth and super reliable but if you go with it expect a learning curve and to play with some daihatsu lego

Honestly I have been under the same understanding of this also but fact that I have been aware of is I have known of 3-4 jbjl in aus and all of them have had engine failure. I actually think it maybe more to do with the tune in the ecu that pushes them a little further than what the jbdet does. eg The jbjl has a higher limiter than the jbdet. sure you can get a dsport ecu for the jbdet that has a more aggresive tune with a higher limiter but I dont know the outcome of prolonged use of that ecu. I have drivin an L200 with a jbjl and it was really good. Just my personal preference would be the jbdet over the jbjl.

EJ-DE also has a “returnless” fuel rail. I drilled the end and tapped it for a fitting. Run this to a pressure reg and then to the fuel return.

K3VE virtually falls into an L700. Pioneered by forum members years before MCM did it. Not such an easy thing to do with an L200 or L500. I’ve seen one a K3VE in an L200 and it is documented (can’t tell you where as you have to hunt and problem solve to figure out where you’d find it - the person that did it wanted people to hunt so I’m sworn to semi secrecy).

honestly, stick to the EJ-DE mainly for ease of fitment and less hassles with DoT etc, they are a nice torquey little motor and heaps of go with the shorter ratios of the mira gears and if you want to turbo factory EF-DET turbo gear bolts straight up. but personally a little front mount is needed.not sure about the L500 but on the L200 it can fit with only cutting a hole under lhs headlight for piping,no other holes or cutting required

couldnt agree more with @Mokeman on ease of fitment etc. But this has been good for us all to get out our pros and cons with all the different engine we each have had experience with. Love seeing this sort of thread happen.

Some awesome info here thanks for all the replies. Currently settled on the EJ-DE as a starting point. I wasnt aware that I would retain the gearbox of the orignal car and thought the sirion box would be the go. Given that are the driveshafts compatible?

Currenlty on the hunt for a sirion so that I can swap out the entire front upright as well as get an ej-de. If anyone knows of a sirion for sale cheap please let me know. I can get it shipped if its not too far away or collect from anywhere in Victoria. GIven that the gear box is not required for the swap I guess this means autos would be fine too?

I did see an rolled l700 come up recently for very cheap any idea the varience in control arm and upright between the sirion and l700 could the l700 upright be used and just source sirion control arms? people seemed to want significantly more for a sirion than a crash l700

from what i know the sirion and cuore boxes have different mounting points to the L500’s, the suspension and hubs are needed if doing a 4x100 conversion. Wiring for a Daihatsu honestly isn’t hard if you take the time to read the diagrams in the manuals and cross reference models and search a few builds and other threads on the forum. ps, for a bit more ease, L200 and L500’s share alot of parts mechanically wise just different body and interior stuff

Best is m100 Sirion uprights, strut and brakes. You will only need l700 control arms. M100 arms are way to long. L700 driveshafts. One side should fit the other needs shortening. M100 rear drums and wheel cylinders, but one bearing from the m100 and one from the l500 gets used, and don’t leave out the crush tube

So I have never done the conversion but as far as I know you can fit the EJ-DE to the L200/500 box similar to what I did with the JBDET.

Moving to the sirion box is more involved as noted by @Mr_Gormsby and I believe also involves the setting up rods instead of linkages for the gearbox shifter.

And clutch cable gets altered. A good swap that I should have already done for myself. Helped Tim do it to his efimira after breaking many gearboxes (130-150fwhp and I heard 180 with the dvvt installed but engine kept breaking at that level, note it was std block and heads)