Well, let’s sit down for our oldest project, Natsu!

bought on the first day of summer in 2020, it was a joyous moment filled with laughter and carburetor smells. Myself being more of an EFI guy, I was hesitant. but Lisa loved it so we bought it for a steal.

here he is, a few days after we bought him. 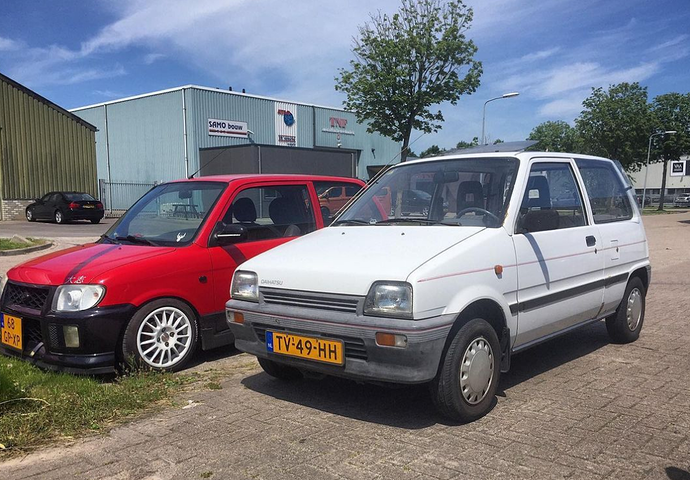 turns out he was having some overheating issues, clutch was starting to go, had a really rough idle as well. as well as a buzz in the interior

it started with giving him a good wash, polish and detail, I like to have a car fresh before I start working on it, it’s also very motivational to get a good looking car to work better. 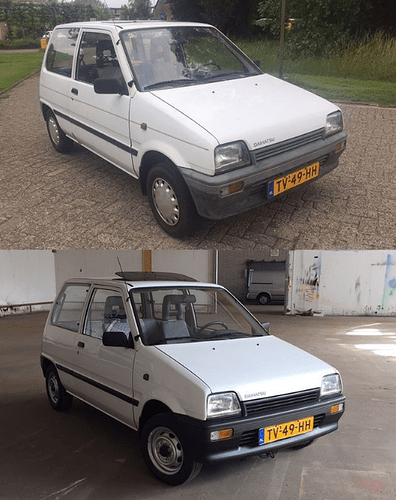 cleanup496×625 398 KB
a really nice before and after, I work as a car detailer so getting this one back to a goodlooking car was a piece of cake, resprayed the bumpers, got rid of the striping, polished everything up and cleaned the interior 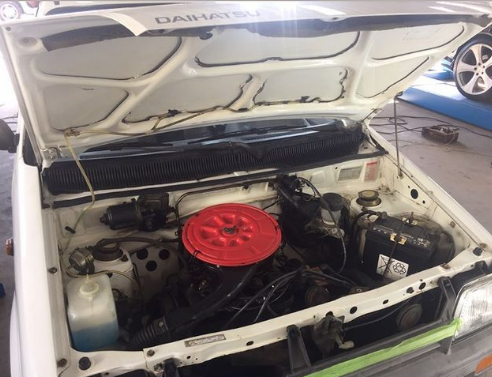 engine bay got cleaned up too, we later resprayed the airfilter cover to factory black. it’s looking great, considering the state it was in before we got it.

next up was the overheating issue, turned out the previous owner had ripped out the thermostat because the fan wasn’t kicking in. this also meant it took ages for it to warm up, but when it was standing still with the engine still running, it would overheat quite promptly.

so, new thermostat and fanswitch. and we were good to go. it still had a little buzz though, turned out to be coming from the ignition coil that was grounding in a place where it shouldn’t. I’ve managed to isolate it with some rubber, but it still buzzes very slightly. might have to get it replaced.

sadly though, recently it had a little oopsy daisy on a roundabout,
the rear carrier arm turned out to be rusted away and broke at the wheel hub. very scary,

luckily enough we know of a new set of arms a 2.5 hour drive away, we’ll get to it someday. but right now we’re just not very motivated, and a little short on funds. we’ll keep you updated though, it won’t get crushed soon, just need to gather up the strength to fix 'em up again!

Natsu… Interesting name. Who of you two is into “Fairy Tail” I wonder…

In any case, nice to meet you Natsu! I can see that you found a nice home, with good people taking care of you! Bravo!

Whell, you now what they say:
Two things are infinit

Personaly, I’m not sure for the first one…

in fact the name Natsu comes from the Japanese translation of “summer”, we bought it on the first day of summer 2020, hence the nickname

The previous owner didn’t have a lot of mechanical expertise so to say, I guess it happens haha. good thing it’s fixed now!

Well, I can understand that someone might not have mechanical expertise, that’s fine. Go to a mechanic… And if you did, then the mechanic was a fraud!

Great news! A friend of us parted out his donor L80 and we got some nice rear arms / axles and front arms!

Really happy with this cause it means we can get ol’ Natsu back on the road again. Thinking about getting to work tomorrow through the weekend, or next week.

And heres our replacement

The new part is in great condition luckily, all we have to do now is rustproof the shit out of it and install. That should be enough to at least get our little natsu back on his wobbly feet!

Did a lot of work today and yesterday, rear arm has been replaced now, still have to bleed the brakes but want to do that when the other side is finished as well.

today I worked on replacing the front lower arms and swaybar, which was battle to say the least.
I got some good progress, arms are done, swaybar is in, just need to tighten everything up. the only problem is that, it seems the swaybar is connected to the frame with nuts welded in the subframe itself, two of these welded nuts snapped and I see no other way to get the swaybar bushing back in and tight then to just weld the brackets back. is there a way to remove these snapped nuts from the subframe? they’re on the inside and I’m afraid they’ll rattle when driving.

Is welding the brackets back a good idea? I don’t know yet but don’t really see any other options as of now. Ideas and propositions are very welcome! other than that, Natsu is doing well and almost back on his wheels!

could you drill right through the subframe and use some long bolt’s like the engine mount bolts and of course put nuts on the other side instead of welding to the subframe?

I’ve welded them in now, but this could maybe work!

only thing that concers me is if I have enough clearance for the radiatior, cause it’s mounted on the same piece of subframe. but I’ll definitely look into this!

FINALLY, after two months of work little Natsu is finally back on the road again.

After fitting new rear arms and hooking everything up, ready to bleed the brakes, the nipples snapped of causing us to use the old rear braking cilinders. Got everything unstuck but demolished the brake lines. Still had 1 spare so fitted that but had a new one made for the left side. 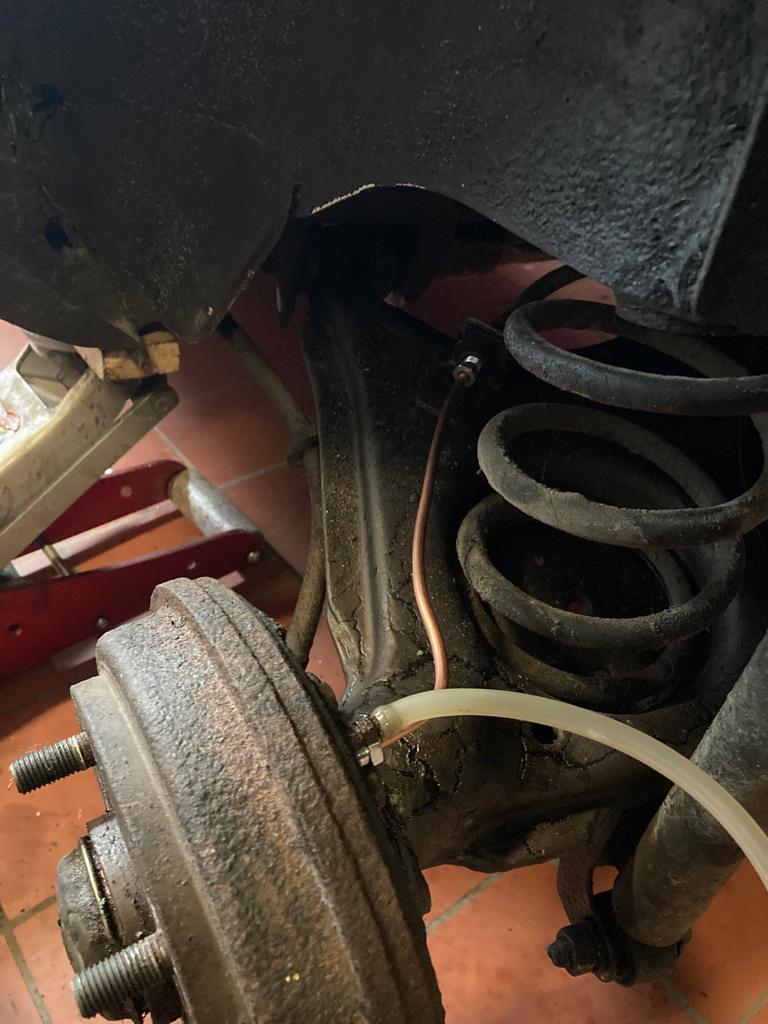 Finally ready to have the brakes bled, the real last step. Also tightened the handbrake. 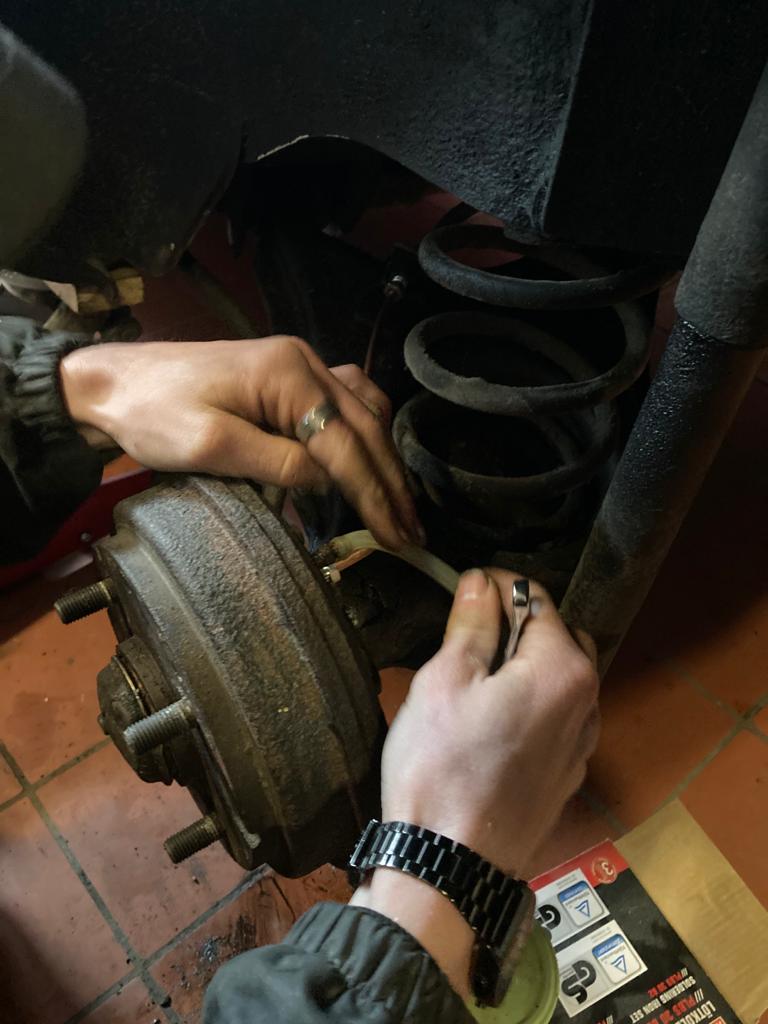 Very carefully went out for a test drive and it was functioning okay, of course our trust in this car was lost. So were taking smallsteps to get comfortable with him again. It runs good, takes corners a lot better thanks to the fresh rubbers in the front arms and swaybar brackets.

The only problem now is that the heater is only blowing cold air. Could this be due to the car standing still for a while? Only started it once during the two months I was working on it.

Anyway, we gave him a quick wash and he’s almost back to his former glory. Another one saved 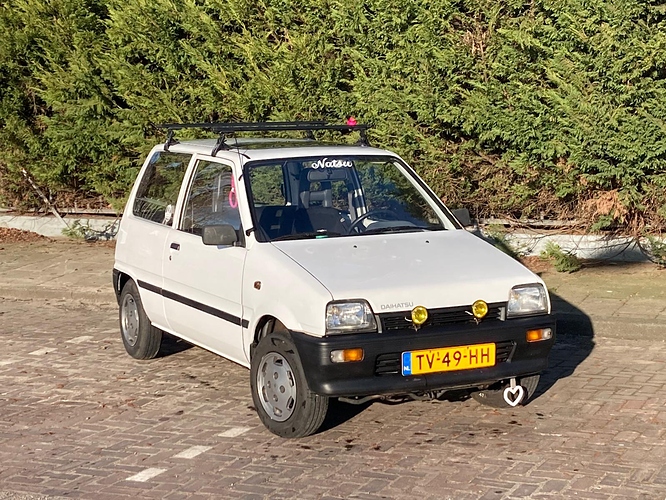 Next up is fixing that heater, and we also have some lowering springs coming soon!

check your heater hoses in the engine bay for a blockage as the heater is like a mini radiator inside the fan unit under the dash, normally the coolant should circulate through there all the time while motor is running.

After further inspection it seems to blow hot air only on the feet and window, the main front vents only blow cold air while the rest is quite hot. I’m suspecting something like a flap thats not operating right to guide the hot air through these vents, and instead blows cold.

i have the same thing happen in my L200

Maintenance today! We had a knocking CV joint so we sourced a used driveshaft and replaced it. Quite an easy job since the suspension had already been taken apart and we made sure to copper grease everything. This really makes working on an old care much more enjoyable. Removed the front mcpherson struts and slid the old driveshaft out. 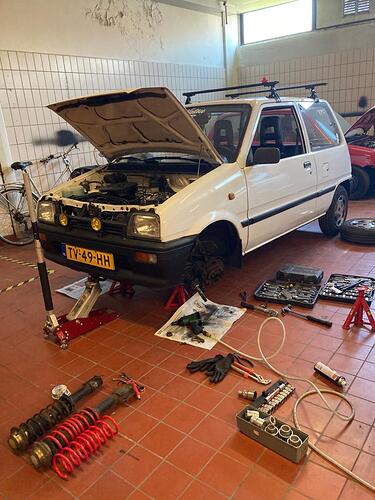 Takes some wiggling to get the new one in, but not too much of a hassle!

Right now where deciding whether to do some lowering springs as well. So working longer or just head home and watch some formula 1

Took our little friend to a small Daihatsu meeting, definitely drives a lot better now and sits nice and low! 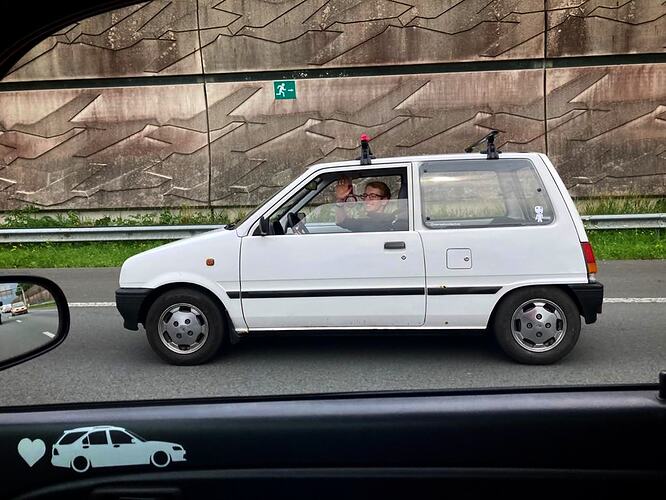 There was a meet? Damn

We should do a forum meet

Yeah it was mostly sirions, not that big of a deal. I think only 10 people were there.

Just posting some new pictures from our little friend here. Almost ready for the MOT, turned out the pump for the window sprayers failed. So I had to come up with a clever solution. I’ll make a little diy guide here soon!

Gave Natsu some TLC, paint touch ups, general care and cleaning etc. He needs a new muffler and then he should be ready for MOT.

we also found a rare hatch wing, hopefully installing that soon too!

Been using Natsu a lot more these days since the gas prices are sky high. He’s been a true economical friend so he deserved some more care and new parts!

We had this super cool OEM spoiler laying around, came from a friend who used to work at a Daihatsu dealership.

Also the lower part of the driver side door was rusty and beat up. Sanded it down and gave it some paint. Theres a slight colour difference but it’s better than rust

Also got a new MOT recently so were good to go for another two years!