Would be cool to see it up here in Qld at lakeside.

About to look at getting a trxx over to rip apart already have the ej in mine and it is a bit of fun but would really like the awd.
Would need it once I turbo the ej.

AWD not needed with the EJ once turboed unless you can put in a Sadev box or similar. The factory box will not hold much power and is only part time AWD. The added weight and complexity is detremental with this type of viscous coupling center diff. Also the factory rear end is a live axle whereas the fwd is trailing arm. Suzuki tried a AWD version of the 2nd gen Swift. I think it was Rod Browning about 1989 looked at running one in the QRC and ARC. I drove it and a fwd back to back, the AWD was awful with lag when the back got drive. I also drove Andrew Wright’s PRC (sort of gp A) swift with a plated LSD and it was phenomenal These Suzuki and Diahatsu factory systems are nothing like a Subaru or Mitsubishi system. Like the title says, “Romanticised JDM”. A Sadev box will be about $25k landed. Having said all of this, Mick’s Sirion and other Sirions in rallying have found success. Perhaps a more interesting AWD Mira would be Ian Richards one from South Australia, look that one up.

Thanks for the info. I’ll try find out some more about the Ian Richards build not really after speed just a fun drive so will look into it a bit more.

There are a few images and a little info here on Ian. He builds/maintains Formula 3 race cars in South Australia. His Mira was entered to run in Qld at the 2021 Leyburn sprints. It’s been around for quite a long time but does not make many online appearances. One fun drive is a fwd with a good plated lsd. Find an old obscure awd with part time awd that works via viscous, they aren’t a whole lot of fun as the action is often out of sync with what you might be wanting to happen.

Drove this thing around a bit over the last few weeks and had a great time with it. I was having some annoying boost and idle issues so I went through some of the vacuum lines on top of the engine and they are all a bit crusty.

So I’ve decided that I will keep the engine that’s in there and give it a tidy up and new engine management which means I can also use an electronic throttle and delete 90% of the crap on top of the engine while still retaining its character. This means I can tune it and tweak it and get a smooth Idle.

Pretty sure that engine is an ef-jl But there is a few gaps in my knowledge in terms of what turbo is on there and if a manifold I have here to suit Subaru turbos would work.

Anyway I’ll stick with all the stock turbo and intercooler set up for now as long as I can make it work with the throttle set up. Currently making a prototype on the 3D printer to adapt to the stock intake manifold 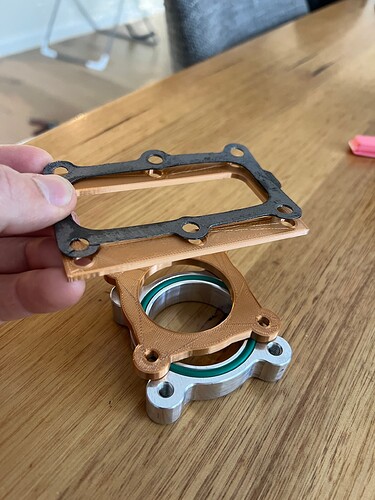 Nice work. I would like to get into 3d printing but I’ll just stick to manual milling for now