So I guess it is time for a project build topic mostly about the Detomaso, but probably also some about the Sirion M301.

So to start at the start, I own an original 1994 Charade Detomaso, as far as I know the only one in the Netherlands and one of only a few in Europe. My first car was a white 1994 G200 and when I first heard of the Detomaso I know I had to own one someday, it is the Ultimate G200 (in my opinion:grin:).

Scroll down for photo’s

History:
The car lived in Japan from 1994 till 1998 and at least part of its 4 year stay in Japan it lived in the Japanese city: Shimada, located in the Shizuoka Prefecture. It still has the Parking sticker on the front window of this city.

In 1998 the car was sold and exported to the UK, it was there until 2004, and lived at least part of its UK adventure in the city of Gainsborough, Lincolnshire (from 2001 till 2004. After these 6 year is was sold again, this time to the Netherlands. A Daihatsu enthusiast had both if of EBay, and drove it from the UK (on UK license plates, I still have them) back to NL. There it was prepped for the Dutch registration check to get a license and become road legal. He own the car for several years, and eventually sold it at the end of 2011. Unfortunately for me it was sold before I even noticed it was for sale. It was sold within the, then still excising, Dutch Daihatsu club.
This person only had it for a few months after with is was sold again. This time outside the club and it was of the radar for about 2 year. In this time it has had another 3 owners that did not really treat the car as it should have.

In 2013 it serviced again, on a Dutch car website for sale. I called the owner and made an appointment to pick it up on Thursday (it was Tuesday). Unfortunately I got a text the night before that the car was sold. I tried calling but no luck.
I was then informed that the car was picked up by a Daihatsu enthusiast from the same city as me, I met him a few times, so got in contact with him and told him to get in contact if he ever would want to get rit op it. I had actually done the same as me, called the owner, got in the car and picked it up on Wednesday .

Anyway a few weeks later we got in contact, he had done some work on the Detomaso to get it running good again. It was running on 3 cylinders when he picked it up and had two blocked brake calipers. Anyway he called me to see if I was still interested. He got a change to buy back his old Charade GTti but for this he had to sell the Detomaso.

So fast forward to now, I have the car sins 2013. And most of this time it was stored to wait restauration. The car was in pretty bad state and did not pass the Dutch MOT (we call it APK) due to rust, lots of rust.

The last 4,5 year we had a lot going on, got married, children, so when I started stripping the Detomaso I planned on restoring it to original and kinde wanted it to be ready already. But life got in the way and the last 2 year it has sat in the garage pretty much untouched.

It feels like the car has been dragged over the seabed during one of its export adventures. Right now it’s completely striped and in need of a lot of love (and new metal). the floor is completely rusted true , the wheel arches are non-existing on the outside and also rusting on the inside. The sills have been welded ones already but they just welded over the old rust. So they just exist of body filler now.

Some photo’s to give you an idea, the goal is to get it back to original. I have an original brochure as well as some prerelease photos.

when I got it: 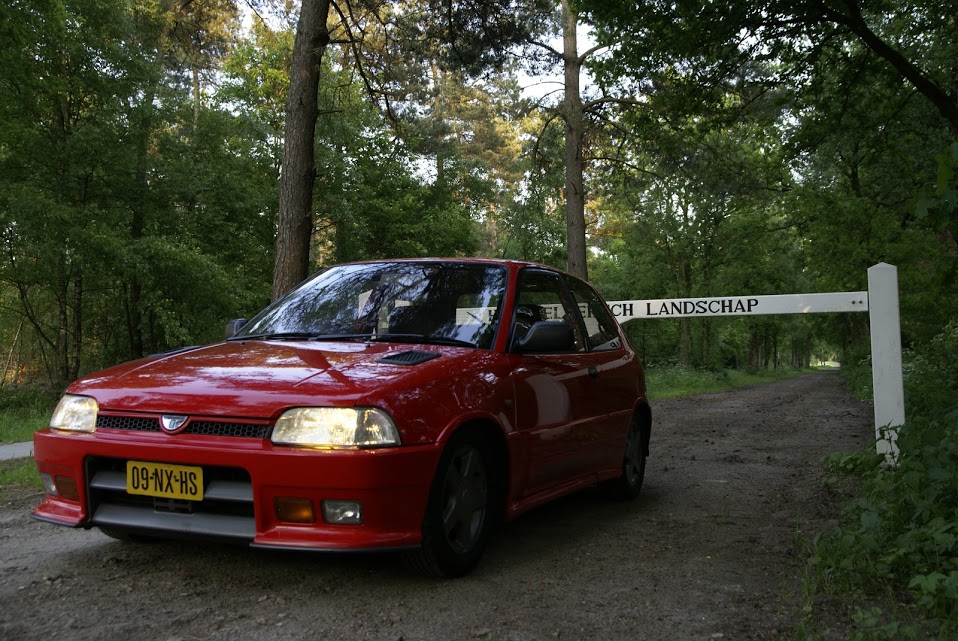 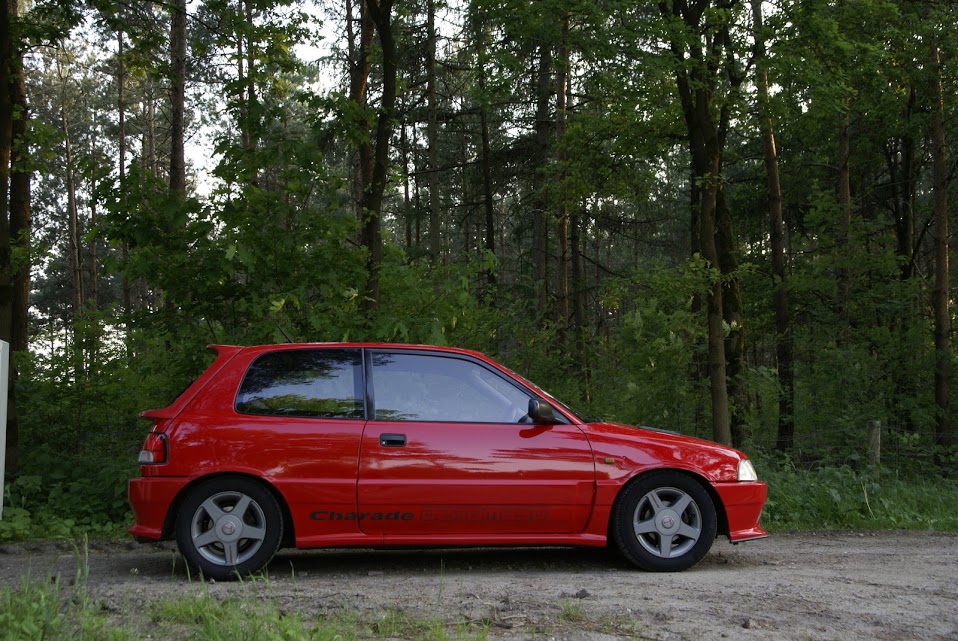 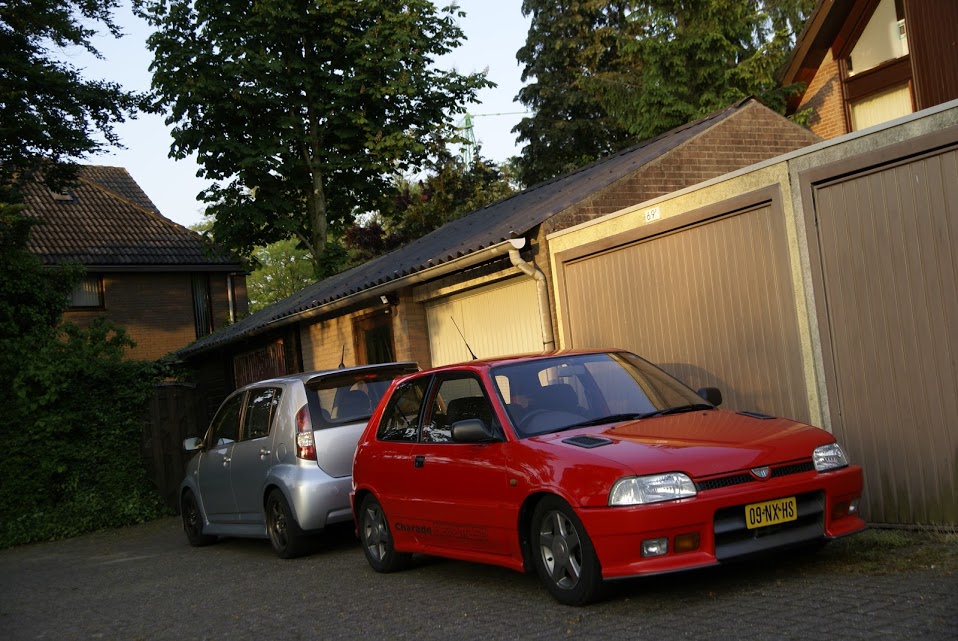 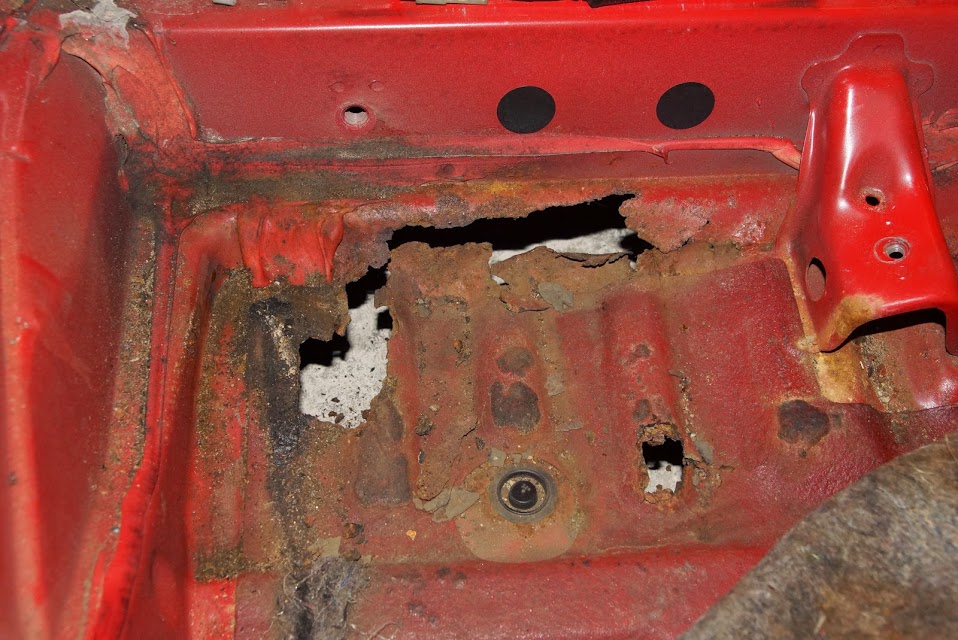 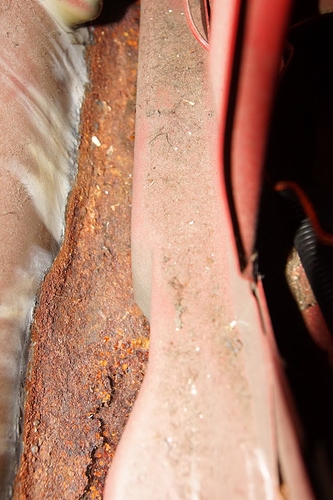 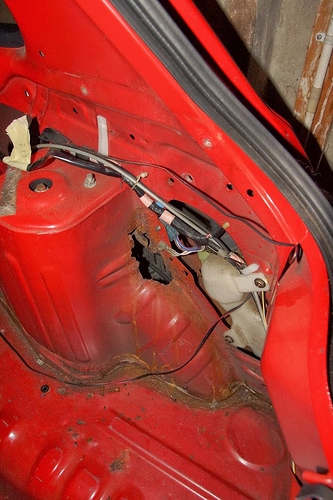 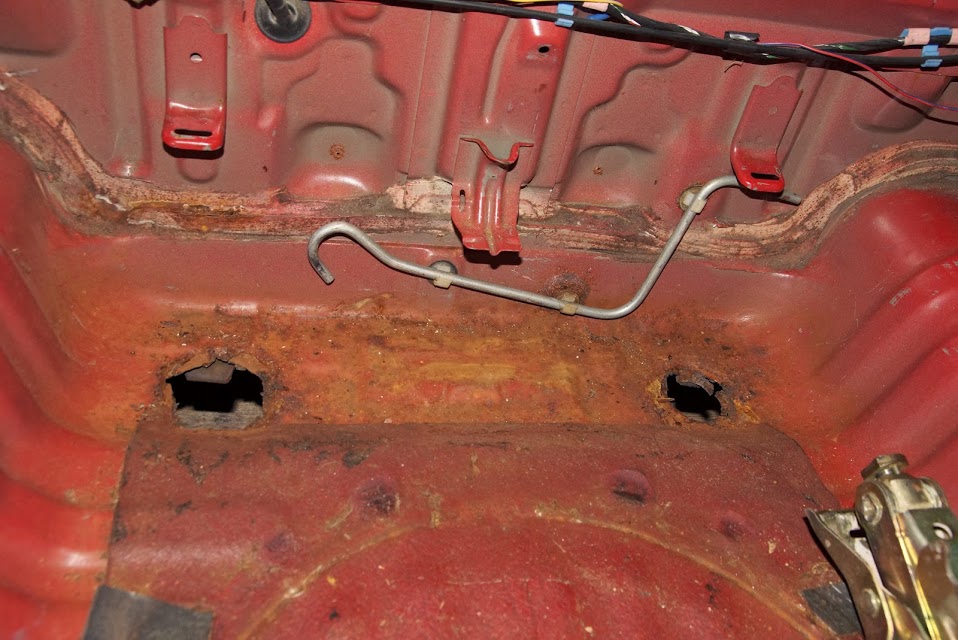 it’s a shame to see such a rarish car going that way, but that is the UK roads for you

good luck with your restoration

Looks good mate, i’m glad we don’t have as bad as a rust problem here. Can’t wait to see it finished.

small update, picked up some Original workplace manuals for the G200 series, L701 cuore and M100 sirion. The G200 is inclusive the body repair manual. bought them of a Honda dealer. Also picked up a L701 Avanzato/TR front and rear bumper from the wreckers. Don’t really need it as I don’t have an L700 but could nog let it go into the shredder. (also took out the dash cluster as it included the tachometer)

So its been a long time since I posted anything here so time for an update. Work on the Detomaso is slow, really need to start planning working days for that.

The Sirion 2 has had its yearly check two weeks ago. Past without remarks. I have it for 8 year now. It’s done 220k km of which I drove 160k. I went through al the bills of the car and beside the basic maintenance in fluids, breaks and tires I have had a broken lambda probe in 2015 and a leaking water pump last year. Other than that that it’s still perfect

The car is on BC racing coilovers now for about 8 month, drives great as long as the roads are paved I changes jobs and had to give back the company car. So as a new daily we both a 2009 Lancia Delta. Not sure if thy where ever deliverd to Austialia? So update om the Detomaso, I took out the rear floor as there was quite some rust. And well the saying rust is like an iceberg seems to be true. The rear frame is pretty much rust with some metal here and there. So first thing now is to get the frame rust free again. Same for wheel arches at the inside, need the replacement.

When that’s good, I can hang the car in the rotisserie and get working on the sills which are, well they don’t really exist anymore. So work enough for the coming period

Have not posted for a while, time for a quick update. As of November I own the Sirion for 10 year. Currently at 225k km and still going strong. Planning on getting new wheels after the winter, not sure yet what, but the paint of the current ones is getting bad.

Also got a 3-2-1 exhaust manifold, want to weld a full stainless steel exhaust during the winter, As well as a frond strut bar an possible something for the rear.

Some photos of the car I made to celebrate the 10 years: 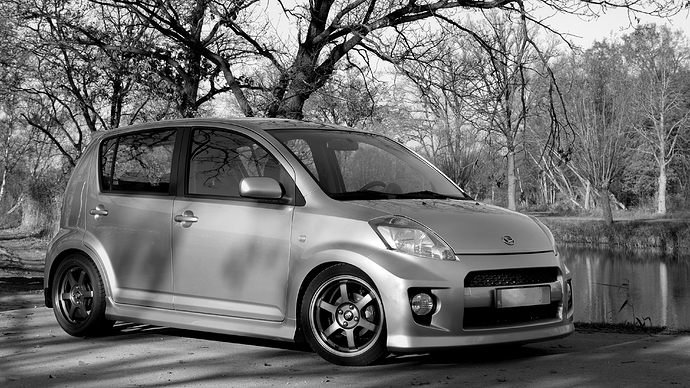 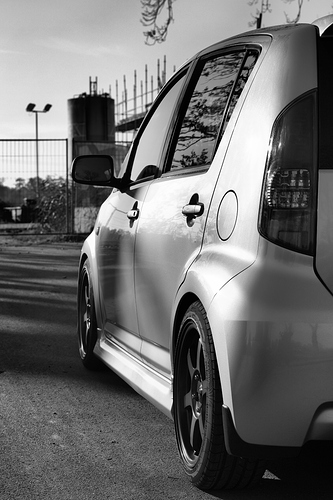 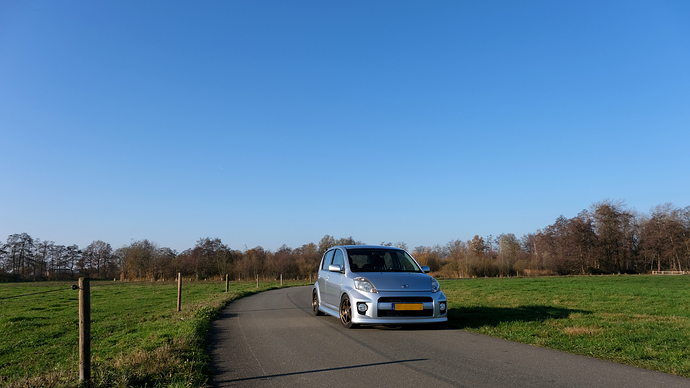 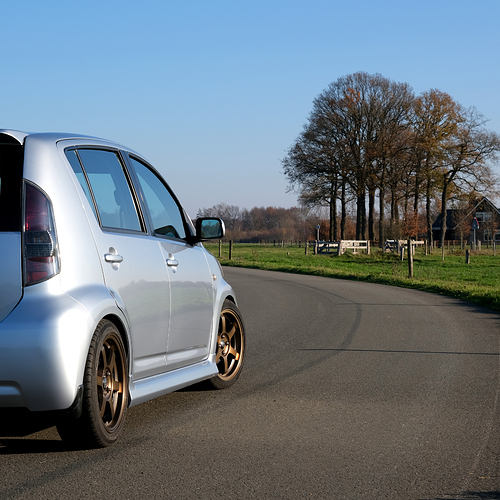 As a side project, I have been working from home for like 8 month now. And was still using one of the kitchen chairs as my desk chair. as I still had the interior of my first car on the attic (1994 charade) I decided to make a desk chair out of that. Got some wheels from the Ikea and welded a frame on it for the frond seat of the charade. Its very comfortable and should have done this like 8 months ago 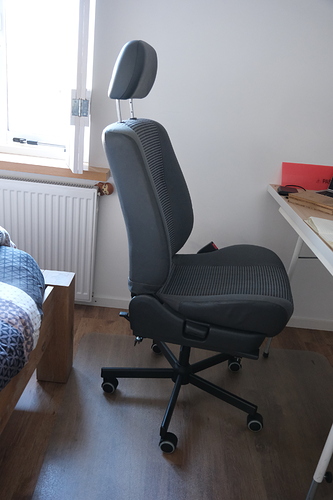 The detomaso is in a bad place at the moment, the car has had several welding jobs done to it in its live, not all very well done. The rear is completely gone, it turns out the chassis frame on the car has been welded over it. The old sheet metal was still there and they welded new (very thin) metal over it witch is also completely rusted, the floor is gone the frond is crooked due to an accident its been in ones. So far not much has remained of the car and we are contemplating what to do as a next step. To be continued.