Something to bounce around Borneo

So I’ve relocated to Brunei, on the island of Borneo (the jungle is never far away) and we needed something that could handle some of the potholes etc on poorly maintained roads at times.

What better to bounce around the jungle in than a Jeep Wrangler. I know Jeep’s don’t have the greatest name for reliability, but these Jeeps have such a strong aftermarket scene that most/all the bugs are known and can be fixed. 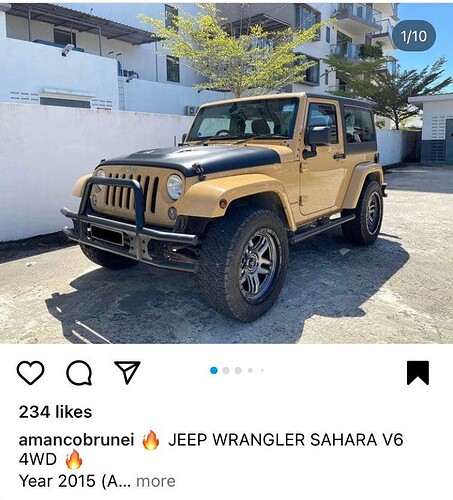 Buying a 2nd hand car in a different country is always fun; i beleive this one has only minor mods:

It has both the hard and soft tops included and a factory infinity sound system (not great, but not terrible). Also we’ve recently tried the soft top out and found that it has never been used from factory, so good to air it out and makes sure it all seals. Also have just removed the rear seats entirely for better load carrying as with the 2dr version, the rear seats are very difficult to twist yourself into and leave little boot space. But since it is just the two of us, this will be perfect!

It may not be the Daihatsu Terios that I was fist thinking of, but being close to Malaysia now there are plenty of small nuggets that might tempt me once I get settled properly.

And here I am doing a move that is 3 hrs away and thinking it’s like a new country.
Hey as much as we all love Dai’s my current daily is a kia pregio for it’s usability and convenience.
Honestly, I think most dais are faster and have more get up and go than the Kia.
The jeep looks alright and if they are popular there with heaps of parts and mods available then great choice and why not!