Hello folks, just got myself a 2003 YRV turbo Auto and I found this place while looking up how to manual swap the YRV turbo. After finding out that 3rd gear isn’t all that great I’m stuck a little bit, I don’t want a car I can’t truly have fun in and the Auto switch down/up just isn’t the same feeling as stick manual as we know. Coming From an FN2 Type R and I’m feeling really good about this car!

Welcome Callum I wish we got the yrv turbo here in Australia. I had an N/A one and they are a great car. Just remember the manual gearbox’s are not that great either but atleast you can get straight cut gears for them.

I don’t know the details fully as I have never looked into getting them as I have had no need. You would need to contact Compact motorsports in New Zealand. You can find them on facebook. (the gears are not cheap) 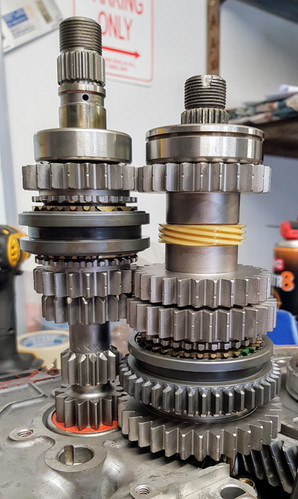 Yes, they offer 3 sets of ratios by the looks of things - at a price…

Ouch. Looks amazing but damn that is some money to poor into a Daihatsu

Here’s an update on the old Dai. The guy who owned this before me had an LPG conversion on it and the wiring seems to be intertwining and looping round all sorts of engine and piping. Hopefully it’s a simple yank all LPG related wiring out and get rid of it! It looks horrible in the engine bay!

That’s the sort of cash it takes to get low volume parts at tight tolerances and good quality. A better route again is to use something like a Sadev which gives easy diff swaps, dog gear engagement and more ratios options. Last price I saw for a good used one was $18 000au. And then you still have to do a bellhousing, drive shafts, shifter and reroute things like exhaust to fit.

It’s just like a onion. Once you are done with one layer, you’ll encounter another layer of stuff you want to do.

Managed to get a day on the old dai today. Stripped a bit more of the front to have access and then also taken some/most of the cooling items and pipe work off. Soon all that should be left is the block itself and the gearbox, that should be an easier few bolts and lift out rather than the labyrinth it seems I’m facing at the moment (considering this is my first engine and gearbox pull that I’m doing, everything before that was exhausts and air filters

I don’t suppose anyone could help with the LPG side of things though, I have noticed while unplugging the wiring harness that on the intake side the wiring is not only connected to the bulk of the harness but also to a small module control box. Is it possible that the lpg kit if connected to these intake ports that have been made or worse yet, bypassing, an original wiring part and having the separate control module inside controls how the LPG is fed into the system?

This lpg system has slowed things right down, just want to yank the thing out but it seems very embedded into the original wiring harness 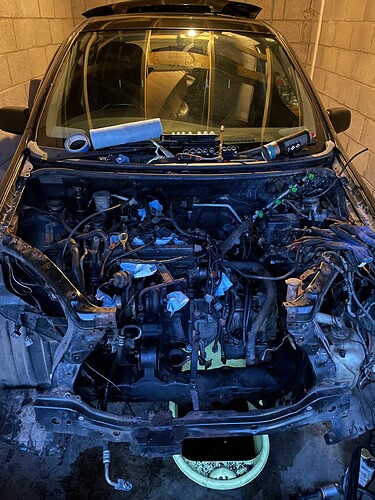 I’ve hit a wall trying to swap this gearbox out, I’ve read the manual and it doesn’t seem much help but just simply saying ‘remove driveshaft’, I’ve taken the hub bolt off and the shock strut so by rights I should be able to slide the driveshaft out of the gearbox but nothings happening when I do? 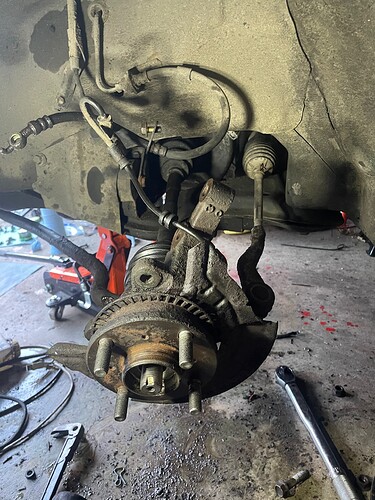 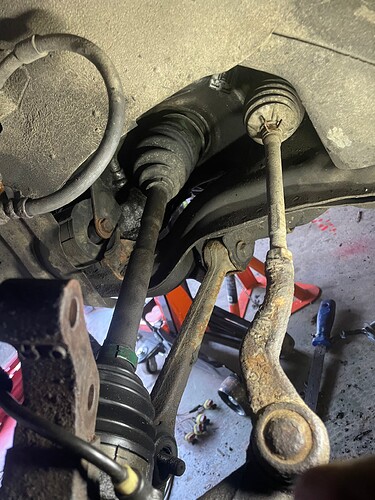 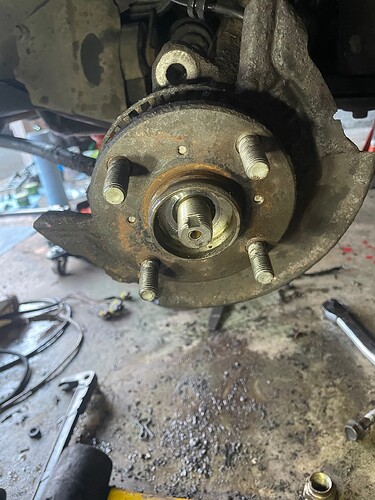 i could be wrong but you will want to take off the steering rack tie rod end and lower control arm from the hub, the driveshaft is more than likely held into the gearbox by a clip on the end of it and will need to be levered out with a couple of large flat screwdrivers or prybars. 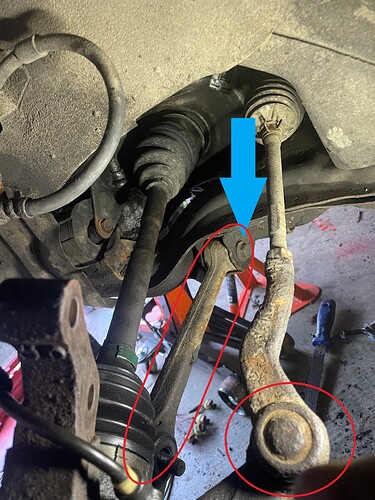 Right, you need to undo the bolt holding the suspension arm in place (blue arrow) and remove it from the arm, you will also have to undo the bolt on the wheel hub end of this. Be aware the threads are easily damaged! Then pull the hub end of the suspension arm (leftmost red circled part) backwards (right in this pic) to pop the eye off of the rear end of the anti roll bar. Then lever the arm out from the subframe, You need to do this on both sides of the car. You might get away with leaving the subframe end bolted in, but its not much extra work and gives you a lot more movement.

With this done, you need to undo the track rod end from the hub too - this is held on with a nut on the underside of the circular bit (rightmost red circle)

This then allows the hub to be free of the suspension components - you can then pull the hub outwards from the car and the driveshaft should pop out of the back of the hub. It might need to be given a tap with a hammer to shock it free of the hub splines but DO THE HUB NUT UP SO IT IS FLUSH WITH THE END OF THE THREADED SECTION FIRST. Otherwise you will mushroom the end of the threaded section and wreck the CV joint. Ask me how I know this…

Also, have you checked that you can undo the gearbox fill plug before you remove the driveshaft?

Nice one for that! Gonna try it out now, and regardless if the fill plug is useable or not the box needs to be pulled from the car as it won’t work normally so there’s no ‘but what if you need to use the car again but have no tranny oil’ - box is knackered either way and won’t work so gotta pull it.

Proper good info that cheers, hopefully I can pull the box this week and get the new one on. Then comes the re-wire and plug back in, fully expecting to be left with pipe work spare not knowing where it goes but I’ll give it the old college try - got myself chassis and engine manuals for the K3 only things I’m missing is turbo rewire but I’m sure I can find out where what goes where as I go along. 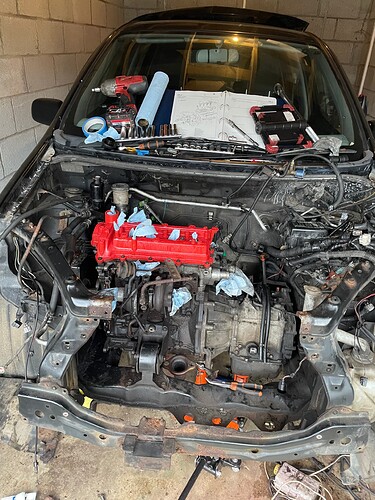