The 3SZ works perfectly fine, and I didn’t have any issues with the wiring harness I made, but I do have 3 warning lights: check engine light, ABS warning light, and brake warning light.

To start with the check engine light: I checked the engine, and it’s still there, so that can’t be it. The issue is that I can’t connect the OBDII scanner to the ECU, where I didn’t have any problems with the old engine. As far as I know, all the pins are in the right place on the DLC as on the ECU. I can’t connect to the ECU, so I can’t erase the codes and turn off the CEL. Very annoying. I don’t think the scanner is the problem, but I’m going to try it on a different car and see if that works. Any ideas?

Now, the ABS warning light is no big deal, because the rear sensors are not connected yet, so that’s probably why it’s on. The brake warning light is a bit weird though. The light is on, no matter what The brake fluid is okay, the handbrake too, and both circuits are closed in their ‘normal’ position (handbrake off, enough fluid). I was watching an MCM video the other day, and would you look at that: 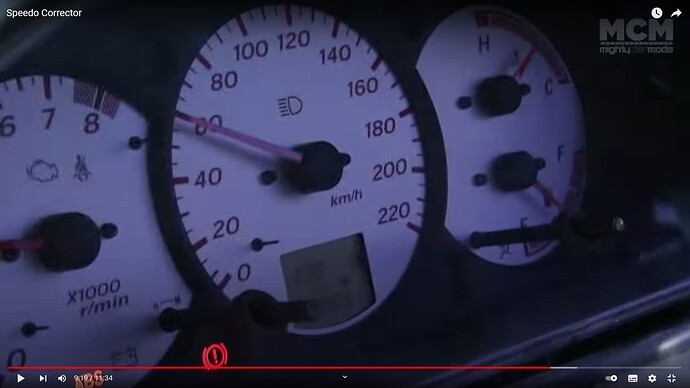 They appear to have the same issue as well, so I don’t think I messed up on my homemade wiring harness.

I looked into the manual, and noticed that both circuits go through the ABS ECU. Could it be that the ABS ECU sends a signal to both lights, and not just the ABS light? I’m probably going to unplug the wire for the ABS light, and bypass the ABS ECU for the brake warning light, but I like to know why the light is on, before I mess anything up.

Well, I found the cause of the brake warning light: apparently, the light turns on if the EBD (Electric Brake-force Distribution) doesn’t work properly. Considering the rear sensors, and none of the brake lines are attached, I’m not surprised.

Based on my recent experiences, check the grounds carefully! specifically, the separate ground from the coil packs/ignitor to the engine block. Check with a multimeter for continuity across this ground and either re-route it, or clean up back to bright metal.

While the EBD might be upset, the ABS block also earths through this same ground, and will put the light on if the ground is not good.

Its also cheap, and easy to check!

another thing to check is the O2 sensor is working properly

I found the issue. When I was making the harness, I didn’t do anything with the CAN system, because it doesn’t connect to anything in my case. Turns out it still needs to be connected to the OBDII plug in order to connect a scanner to the ECU.

Now I could read the codes that caused the warning light to come on in the first place. Guess what? The CAN system isn’t getting any signals. This is because I’m not using the ABS unit that came out of the Sirion 2, which uses CAN. This sucks, because now I have a warning light telling me to check something that’s not there.

Do you know what signal its expecting, and can you make a defeat device to fool it?

If you know it’s not there and isn’t an issue, you could always just remove the bulb for it. That way you don’t see the warning light anymore.

For now I pulled the wire from the cluster, since that is the only way to turn it off

. But, I’d like to know when there’s something else wrong, so that’s why I want it to turn off. Maybe it’s possible to remove the CAN system from the ECU?

It’s not possible to remove the CAN system. The only way is to find what are the “Input” that required by the ECU. Besides the CAN error, is there any other error? May i know what wiring and ECU you’re running?

Below is the CAN Bus system for a M300 sirion 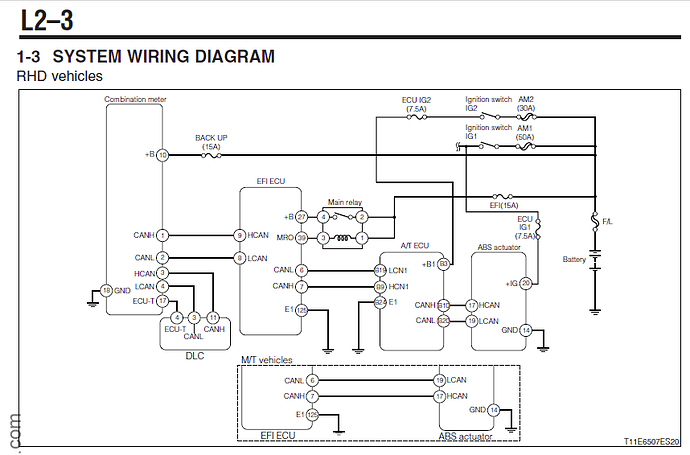 And here is CAN data that i have extracted from my M600 Perodua Myvi or Sirion. 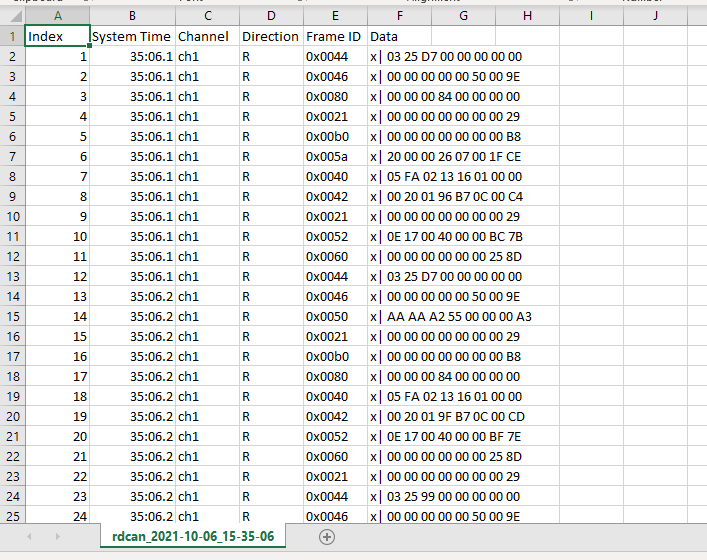 It’s a lot! haha. CAN bus is really a mess. But in order for it not to throw out code is to go deep down and identify which data is missing. It’s not an easy work. The easiest is to just pull the CEL wire out.

As for the ABS light. Just short the ABS wire to the ground. You’ll get it done easily. You can check back in the manual but if i’m not mistaken it is White wire with a green stripe on the blue connector.

For brake warning light. you need to work around it. How i usually do is put a relay. here is the diagram, 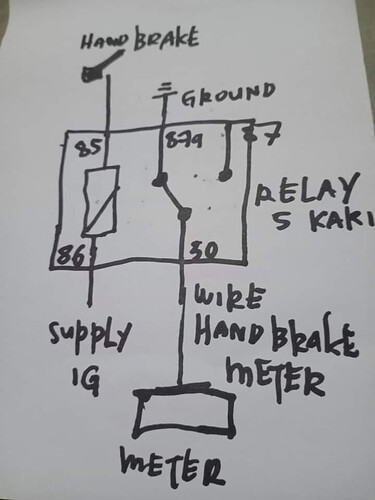 It’s nice to have someone else running a 3SZ

I used the wiring harness and ABS unit from a YRV, and made it work with the standard 3SZ ECU. I do have the ABS unit from the M3, but it’s huge and I don’t know if I’m able to make it work. 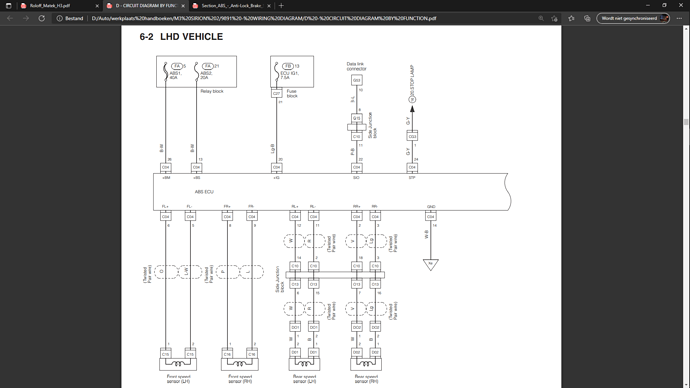 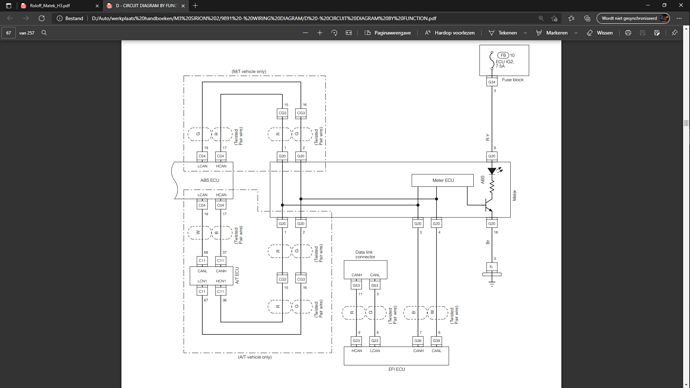 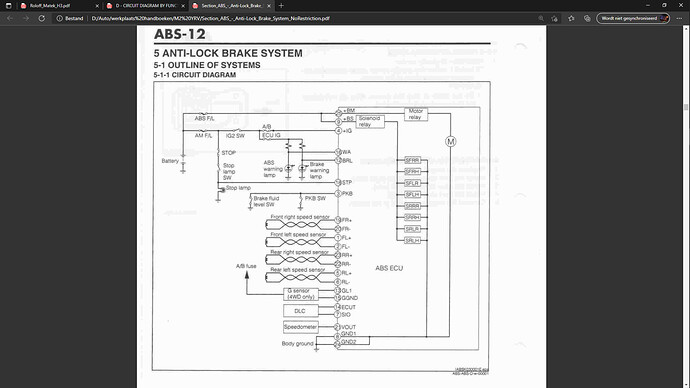 Comparing the diagrams, there don’t seem to be a lot of differences, but I don’t think swapping the ABS unit would solve the problem. I think you’d eventually need the gauge cluster as well, causing even more headache.

but in my opinion, i don’t think you really need the cluster. As it will just only for ABS light. The only thing is what does the ABS and EFI ECU really communicate about. i.e speed?. Also missing a terminating resistor on the other end of the CAN bus could also trigger an error. the 3SZ ecu that you used does it from an Automatic or Manual?

for me i’m using YRV complete wiring except with Storia K3VE2 ECU. But since it is for 1.3 engine, it does start but not running smooth during WOT. but the workaround is running a piggyback such as E-Manage Blue and also swapping the trigger wheel to a YRV one (36-2) instead of a 3SZ (36-2-2-2).

Good thing I’m used to things to be messy

. In the YRV, the speed is read from the ABS sensors and puts out a signal at VOUT. The Sirion 2 however passes this signal throughout CAN, which my speedometer is unable to read. The car it came from was a manual btw

Are you still having problems with your speed?

Knowing I will be in the same boat one day as I won’t be using any of the ABS side of things I won’t have a speed read out. Though I believe I saw a Toyota speed sensor which goes into the hole where the old cable pick up went. I believe all these gearboxes have the hole and the worm gear inside to operate the speed sensor. It would just be a matter of wiring it in

sorry for the late reply. looks like you solved it and it’s easier when you have ABS. if anyone without ABS can use this sensor and wire it up to H83. but i’m not sure on the parts number. 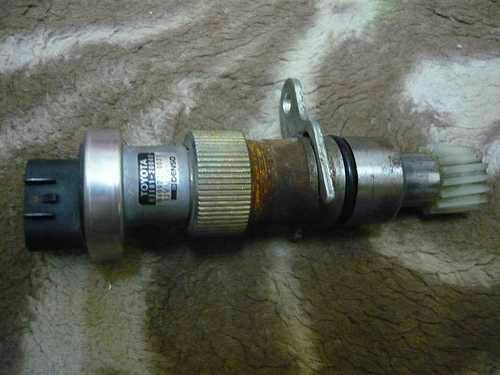 So today was an interesting day. I was driving on the highway, when I suddenly lost all power. The engine didn’t stall, but it barely responded to any throttle input, and if it did, there appeared to be some kind of soft limiter at 3000 rpm. This was pretty scary since there was a serious amount of traffic surrounding me, but I made it to the side of the road safely. I pulled over, tried to rev up the engine, and after a few seconds it did. I got back on the highway, and at first everything seemed fine, but a few minutes later it happened again. Once again, I pulled over, waited until the car would rev again, and then ‘limped’ to the nearest gas station to scan the ECU for any codes. The code P0500 appeared, which meant there was something wrong with the speed sensor. I thought this was pretty strange, as the ECU has nothing to do with the speed. The speed comes from the ABS ECU, which is then sent to the gauge cluster. However… 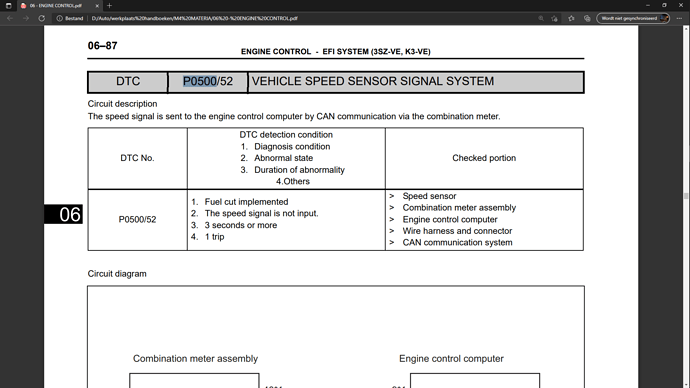 When I got home, I checked the M4 (Materia) manual to see what it said about the codes, and I found something interesting. Apparently, fuel is cut off when the ECU doesn’t get a speed signal. What frustrates me, is that I drove around 300 kilometers without any issues, and now all of a sudden it decides that it needs a speed signal.

I’m posting this story here because it relates to an issue I’ve mentioned here before: the CAN system. The CEL is on because the CAN system doesn’t get a signal from the ABS ECU. I used the wiring harness from a YRV, which means I also had to use that ABS unit. Because that ABS ECU doesn’t have CAN, I can’t run any wires to the ECU, which means no speed signal, and as is turns out, that signal is necessary for the ECU to work properly. So far the only option I can think of, is to make the ‘new’ ABS unit work with the rest of the ‘old’ wiring harness. This way I can run wires to the CAN high and CAN low, and hopefully solve the issue. The gauge cluster needs a squarewave signal from the ABS ECU which the new ABS unit doesn’t have (because it uses CAN for that), but I’m just going to tackle one problem at a time.

Pff, stupid Daihatsu and their fancy CAN system. It has given me nothing but headaches so far