i am Leo, 30y/o & located in germany, so please forgive me if my english is not the best.
About five weeks ago, i bought my second Daihatsu:
a Charade TX 1.3i w/ 90hp and front wheel drive from 1991.

My first Daihatsu - and my first own car ever - was a Daihatsu Cuore L7 from 2003 w/ EJ-VE engine. I loved that Gokart-Feeling but the engine said no last year. After i bought a slow-and-unfunny-as-hell-to-drive Honda Jazz for daily use, i wanted a new Cuore. So enough of my car history and back to topic:

after a lot of searching i found an offer in a german Daihatsu group on facebook:
a white Daihatsu Charade 1.3 TX from 1991, as the name says, 1.3l-engine, front wheel drive, 90hp, 111.000km on the clock, not running at all. 90hp at an empty weight of 695kg or so (i think), that sounds funny.
A little to the background of this car as far is i know:

before me, there were two owners. the first bought it in 1991, added new wheels in 15" and installed lowering springs (-30mm). He also swapped the driver’s seat for a Recaro Idealsitz. He only used this car as his second one and, after the death of his wife, the charade wasn’t used for around 9 years.

The second one bought it one year ago or so and changed the fuel pump which died after 9 years standing around (in a garage). So he only changed the pump & only has driven this car to his garage.
The fuel pump died again (so he said) & so he decided to sell it, Luckily to me. 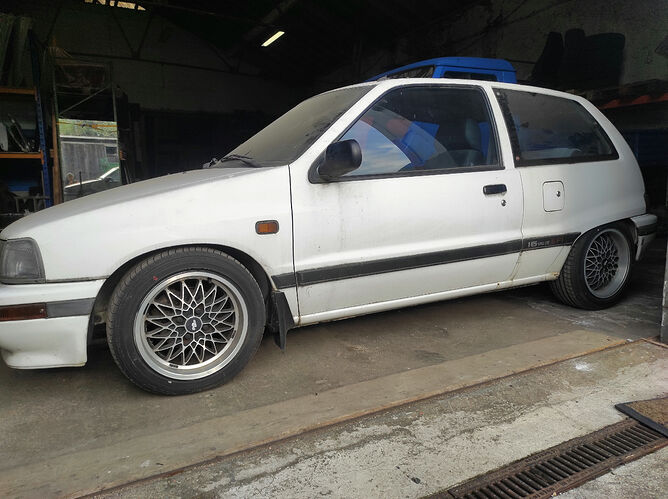 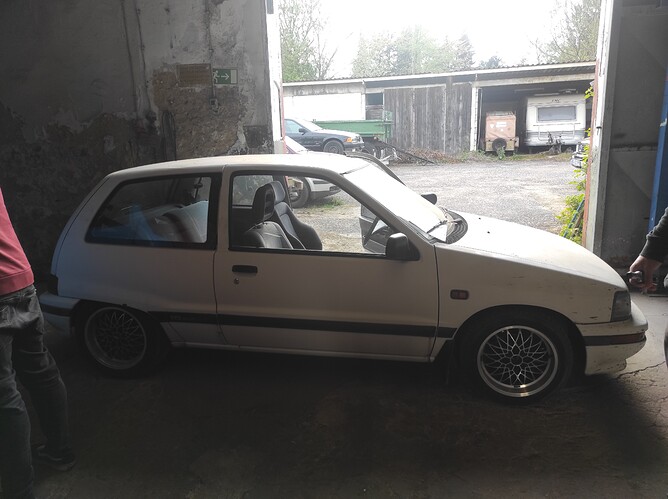 Backgrund information: Auchter + Beck was a very popular german company for daihatsu tuning, very popular was the Daihatsu Charade FLASH, which was a bodykit for the Charade GTti w/ 9x15 rims

the engine cranks and, if we spray break cleaner into the air filter box, starts. 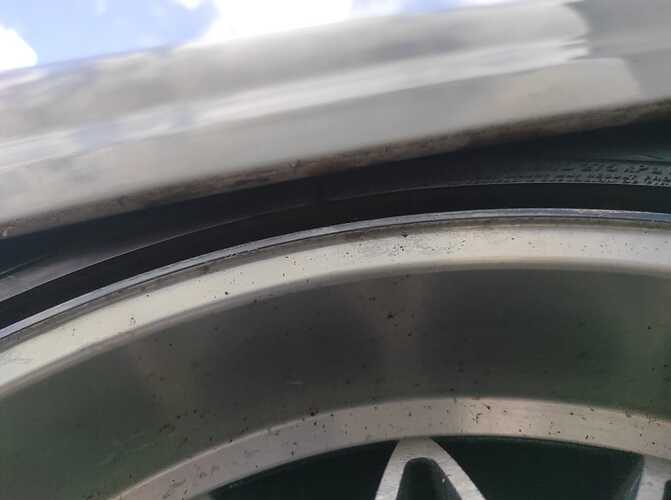 Here are some pictures of the interieur & outside of this car. For 30years it doesn’t look to bad imho.

First we demounted the wheels to have a look on the springs. My hope was that they were in not too bad condition, because they are no more lowering springs from Auchter + Beck.
Side Note: in germany, nearly all aftermarket parts you want to install in/on your car need to be TÜV-approved (equivalent to MOT test or whatever it is called exactly). They have to be testet for security with a certificate and so on…
Auchter + Beck are no more, and Mr. Auchter told me he has thrown away the last pairs around 10 years ago because no one was buying them anymore. So basically, if the installed springs are fcked up after 30 years, i need to find used ones in a better condition, which, you can surely think already, is nearly impossible.
So we took the shock absorbers apart (which were pretty dead) and cleaned the springs: 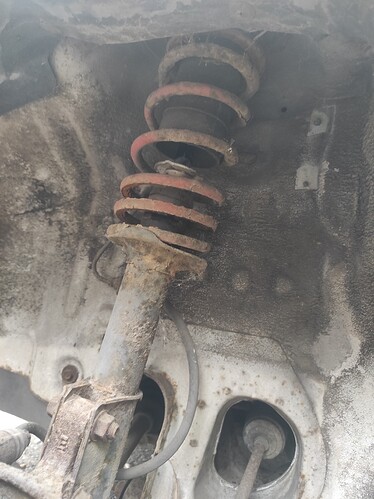 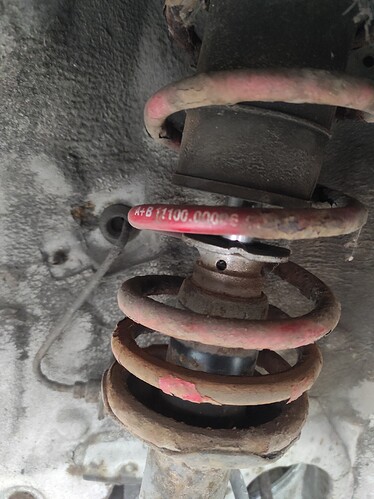 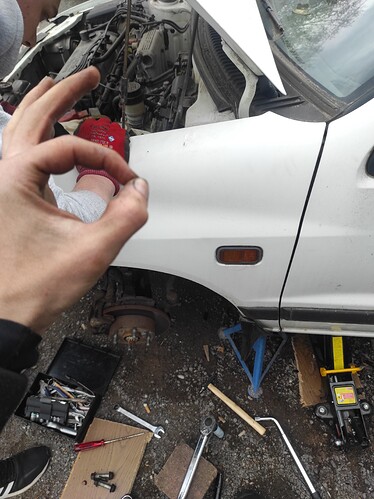 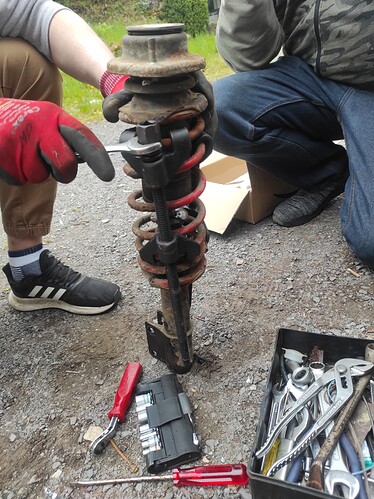 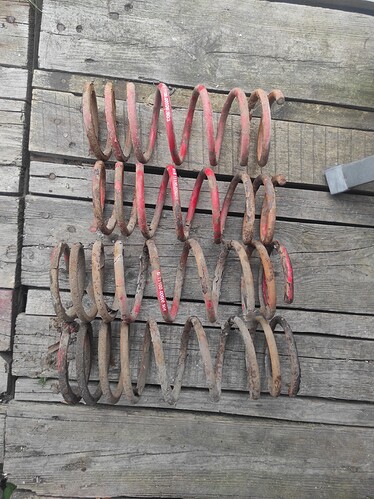 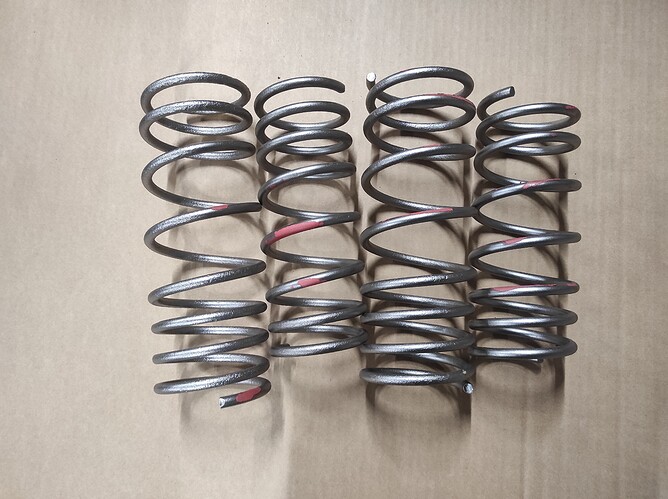 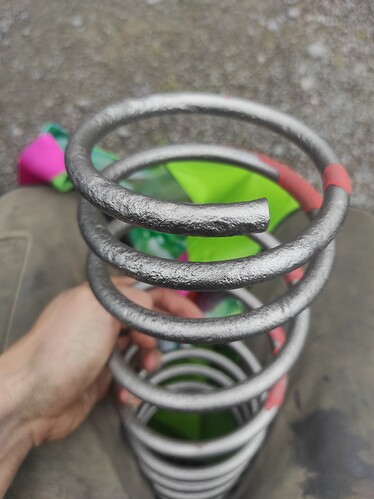 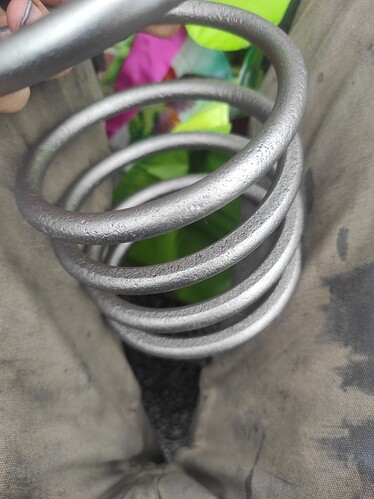 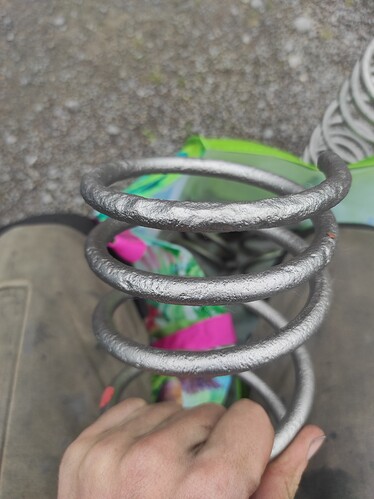 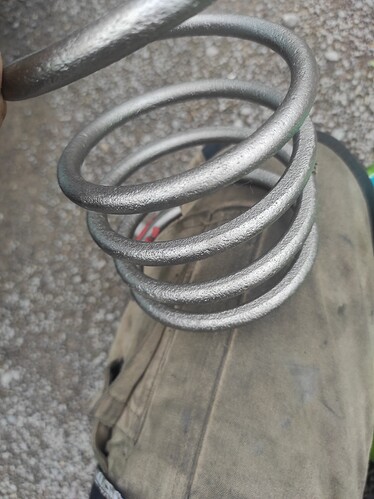 Congrats! The springs look like the surface of the moon. Great. Luckily, just 10km way from my home, there is H&R Springs which had, back in 1990’s, TÜV-Approved lowering springs (-35mm) for the G100. i quickly prayed and wrote them, aaaand: there was a pair in stock! I picked them up only two days later for around 200€: 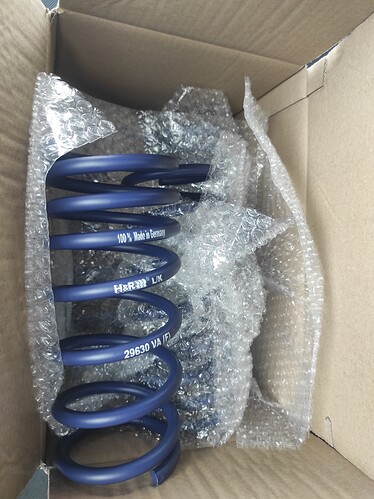 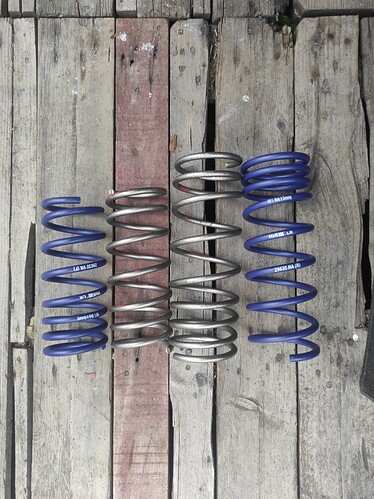 I now hope the 35mm HR’s will fit the rim/tyre combination the car came with, because Auchter + Beck ones only are declared as -30mm. I am confused at this, because the height in my car’s papers was after the installation of the Auchter + Beck corrected by 35mm… so we will see.

If you buy a Daihatsu, you get free rust with it. The rusty points at the arches with the transparent stickers on it? I can stick a screwdriver througt, but that was to expect.
I have heard that the mounting points for the rear shock absorbers are often mission critical / dead on arrival, and so it was very exiting to remove the plastic covers:

I was so happy about that outcome, i expected a very worse condition at this.
About 10 Years of standing still in a dry garage or wherever. There are a few little rusty spots at the windows and doors, but nothing serious. the arches need some welding, it seems that all other spots can be done with grinding & priming.

Meanwhile, we demounted the engine and all that plastic covers to have a look at the timing Belt & water pump: 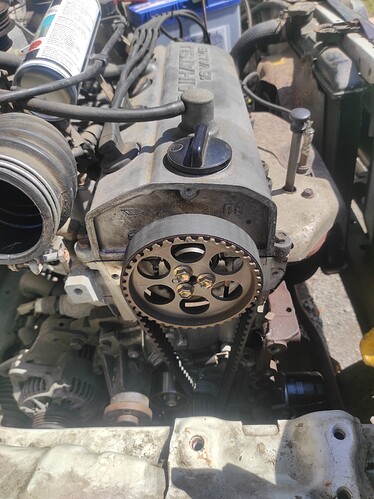 Both look surprisingly fresh and in a good condition - maybe at least the timing belt was changed before, but without a notice at the engine bay or so. The last sticker for timing belt change said 1998 at 89.000km. So no risks here, new pump & belt.
I never changed a timing belt before, there are a mark at the top of the engine at 12 o clock and a mark at 5 o clock at the bottom - and my simple, but wrong thoughts was to adjust the marks in the upper and lower gear with the marks in the engine block - which is totally wrong.
When the mark of the upper gear is at 12 o clock, the mark of the lower gear is at 11 o clock, which makes no sense to me.
Fortunately, there are still some active people at the german Daihatsu forum an one of them send me a scan of an old manual: 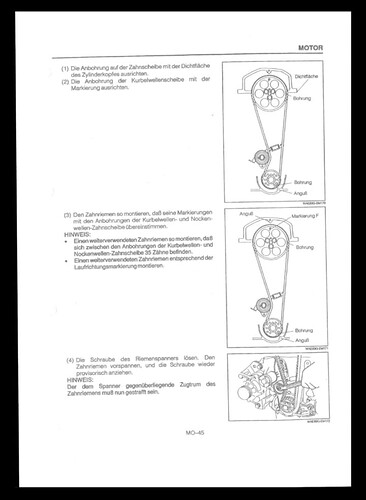 Well, the ‘F’ is for ‘up’ for adjusting with the mark in the engine block & the mark in the gear has to be adjusted with the gasket line.
Yeah, that makes totally sense - but not for me. But i am no mechanic, so if this works, who cares.

So, the mailman brings me a lot of spare parts:
timing belt, tension pully, water pump, oil- & fuel filter and a new fuel pump in case the old one (which is not that old, around one year ago it was already changed) is dead again.

I also ordered both front and rear brakes, new dust protection kit and four new gas-pressure shock absorbers - after all i got three absorbers & no rear brakes.
But hey, it could have been worse! The seller told me he didn’t find the fourth in his warehouse, even if his IT-system told him there were only one of each in stock. Due to the fact that nobody bought rear brakes for the G100/102 in the last 2 years, he has to order a new pair first before he can send it to me.
I can understand this - its a 30 y/o car and quite rare on german streets. If i soon get the missing parts, i am a happy person. 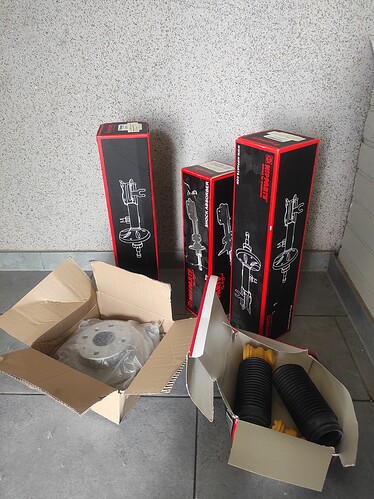 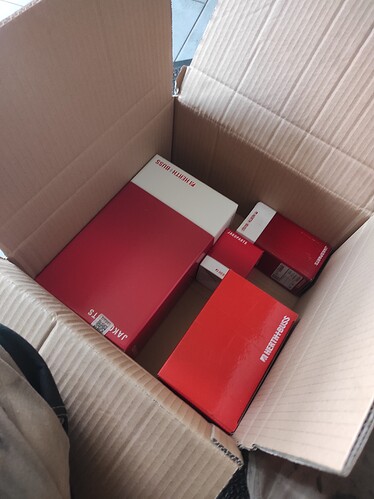 Meanwhile in germany:
i’ve got copys of assessment papers / certificates for the seat & seat console, the rims and the lowering springs - only 48 sheets of paper to hand out to the TÜV engineer. All i need now are papers for the spacers & the tyres. Usually, you don’t need tyre approvals, but when you want to mount a narrow tyre on a wide rim, the tyre’s manufacturer maybe can give you a tyre approval - in my case for 185/55 R15 tyres to moun on a 7" rim. 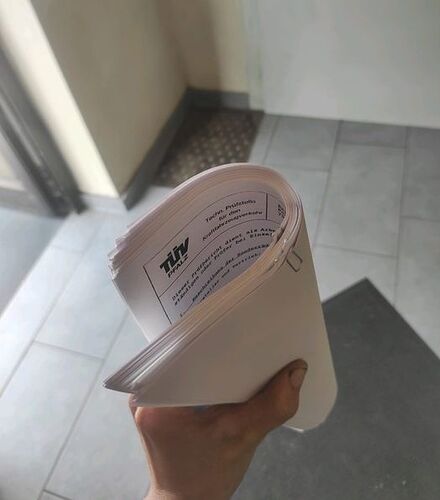 And today i ripped off the screw on the fuel tube. Aaaand the new water pump is DOA, i have enough today. I want to wash this car with rust remover. The Subfloor doesn’t look that bad at first sight.
Tomorrow we will remove the fuel tank & have a look at the fuel pump and the cables for it.
Hopefully, the new water pump will arrive until the weekend. 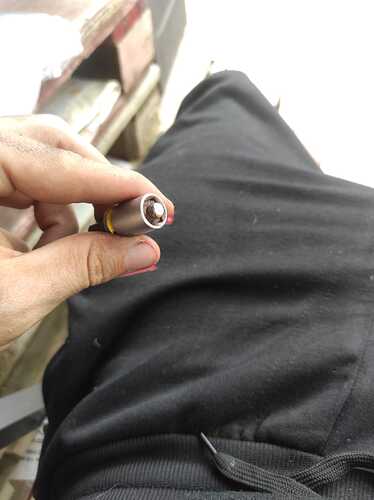 There is a little screw on my rust. 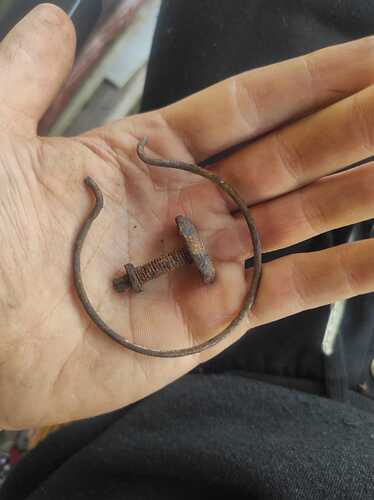 The fuel lines are pretty dead, rusted through and wet at some points. We will change the metal fuel lines for polyamide, so no rust ever again (on the fuel lines :’)).

So, tank is removed and need to be cleaned, many parts are clogged. there was 9year old fuel inside (or nearly 9). With the Colour of dirty apple juice and the smell of - i dont know, never smelled this before

But hey, i had never thought that the sound of a working fuel pump could make me this happy. Rear brakes also arrived this morning. 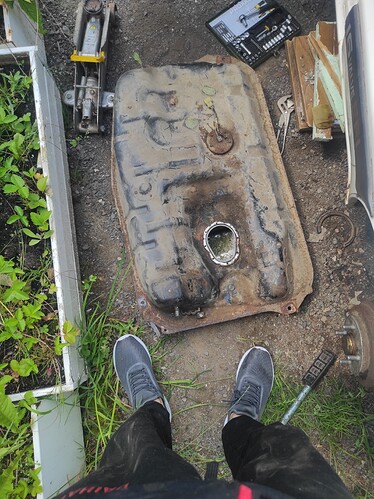 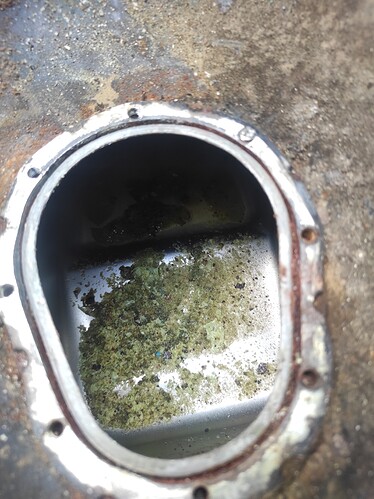 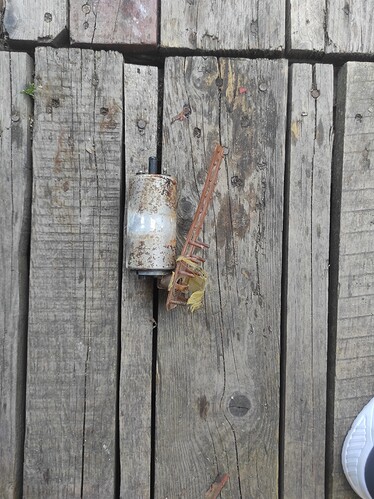 For today:
We cleaned the tank, removed the rust & give it a new painting. The reassembly turned out to be painful, there is so little space, the tubes are so short or stiff and to remove the tank was the hardest thing yet. But this is maybe an easier job when you don’t work on your parking lot, crawling through dust and sand under your new old car.
The new pump is mounted in the tank & we also have installed the new springs in the rear shock absorbers and renewed the dust protectors.
Hopefully the front ones come in the next days. 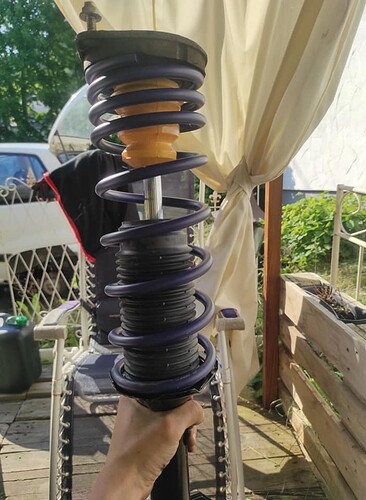 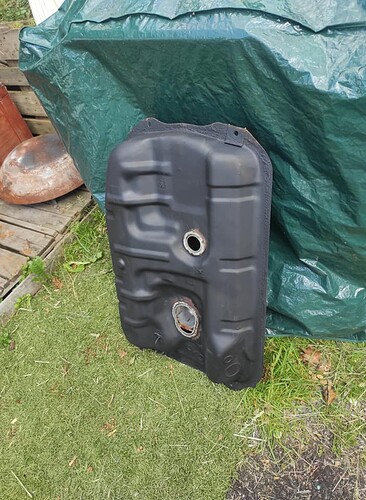 Thank you! I have nearly two weeks of vacation now. The plan is to have this car back on street before this ends.

Great write up! I will be following your build

I am very happy to read this, thank you.

if you just do the new updates in a post like your New updates post then it will come up as the next post that we are all taken to and we will see it is your update without having to scroll back up to find it. (just a suggestion work it how you like).
Keep up the great work

Then I’ll post new things happened continous here & edit them above, too

For today:
We cleaned the tank, removed the rust & give it a new painting. The reassembly turned out to be painful, there is so little space, the tubes are so short or stiff and to remove the tank was the hardest thing yet. But this is maybe an easier job when you don’t work on your parking lot, crawling through dust and sand under your new old car.
The new pump is mounted in the tank & we also have installed the new springs in the rear shock absorbers and renewed the dust protectors.
Hopefully the front ones come in the next days.