Hey guys/gals this is my new daily driver
Mettalic blue, 2002 year, 173 000 km
Has some hidden rust issues but its ok for the time being
Looks clean all except the rear boot…

This is when I got it: 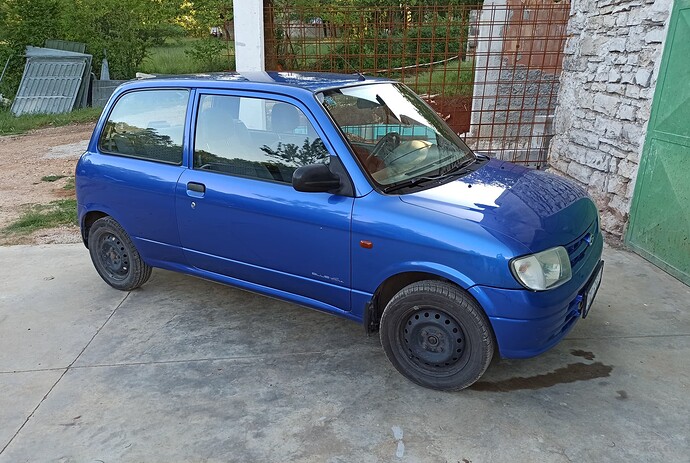 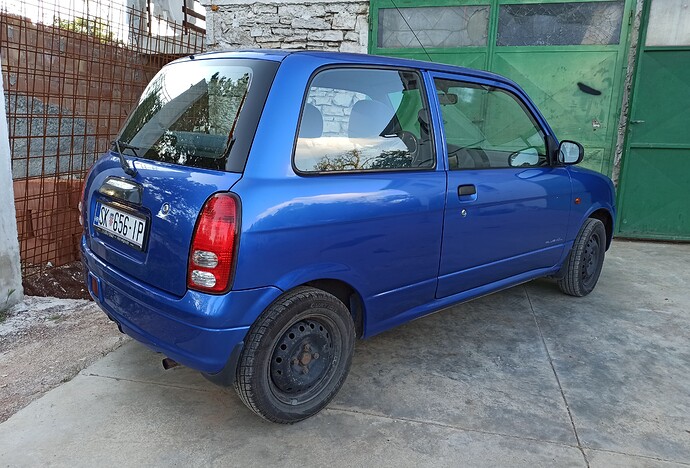 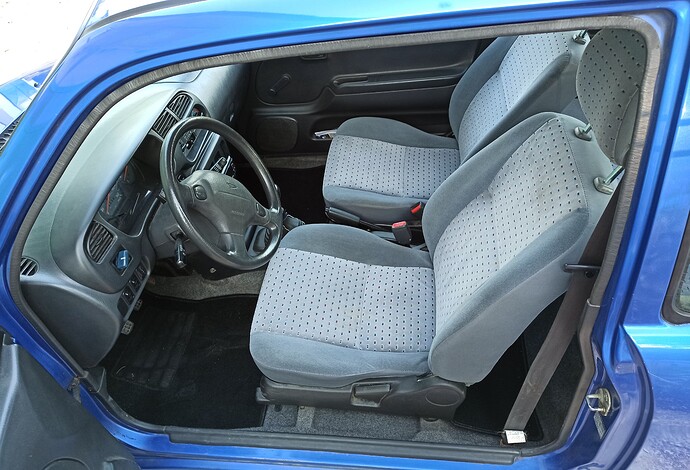 After driving it a few days some issues were found,
Left cv joint is probably bad, clutch (throw out bearing is ringing a little), need to check bushings on the rear axle, noisy gearbox (not like my old one…)…

Also tried some vw steelies with 185/60/14 tires from my ex mazda demio mini wagon… Rears rubbed on the axle so I put some 6mm spacers that i had around, it cleared barely… Fronts were ok but stick out about 10mm.

There is almost no rubbing when i am alone, but when i drive with a passenger its a different story hahah 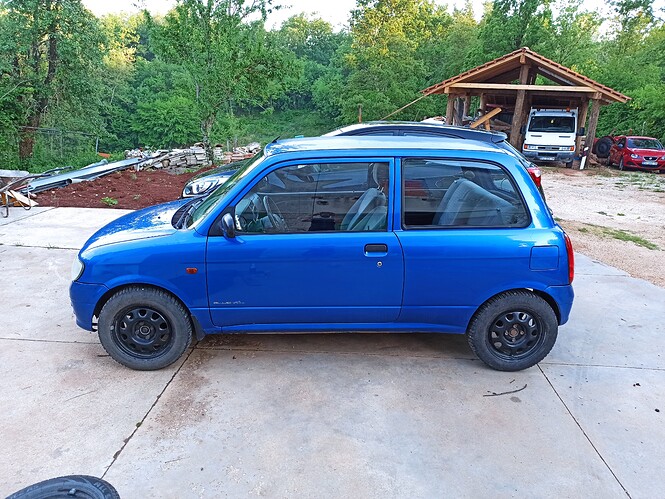 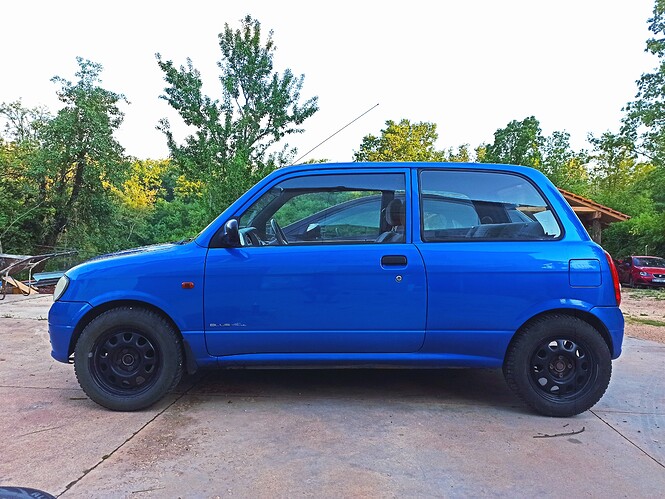 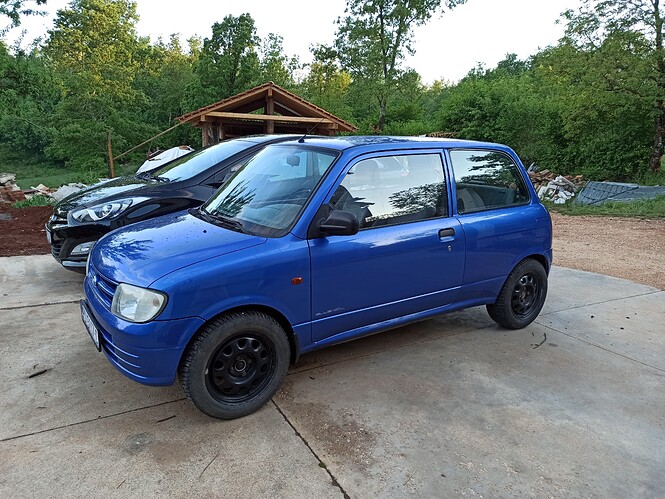 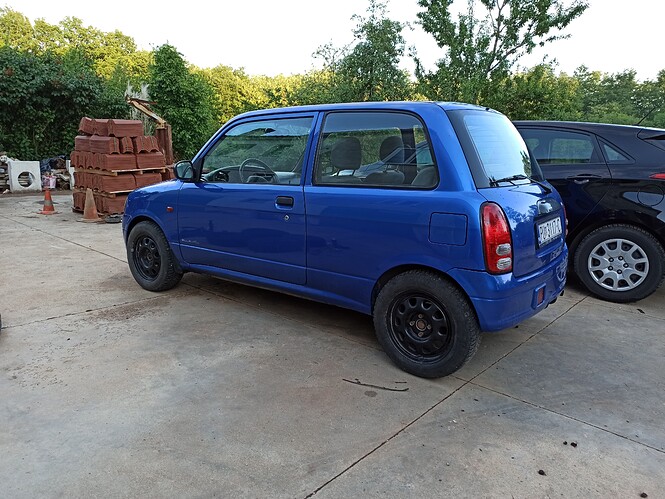 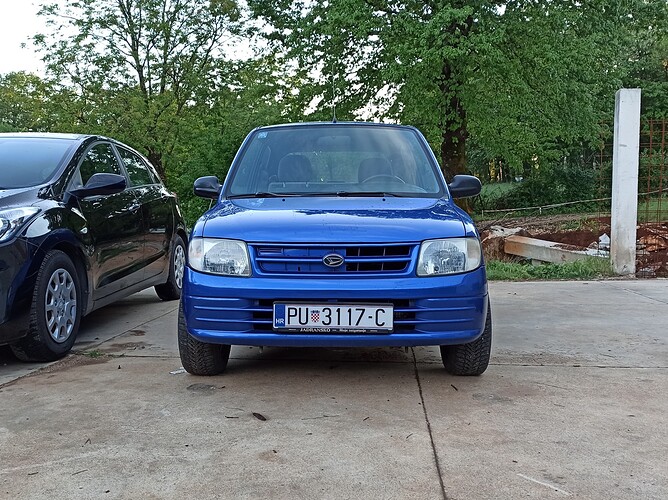 Maybe I should get some of those rubber stoppers for the springs to stiffen it up a little, also dont want to lower it on springs its perfect to me like this.

[quote=“DRU, post:1, topic:5847”]…noisy gearbox (not like my old one…)…[/quote] I would inspect the oil level, immediately.
CV Joint damage is common with these vehicles. It is advisable to inspect these frequently. Once debris enters the joint, the damage caused will be irreversable.
On my previous Daihatsu, I replaced the gearbox oil with that of the fully-synthetic type. Afterwards, it didn’t shift so difficultly as with the old oil.
If you live further away from the Croatian coast, you shouldn’t be having continued rust damage problems.
When I last visited Croatia, I saw the built under license in Slovenia version of the Renault 4. Sometimes, I would see one in new condition. How much does a good one cost, these days?

Im in central istria so 30km away from sea and not on the continent so also no snow. I already bought cv joints for my other cuore so hope they fit. Ill change gearbox oil asap!

Renault 4 have got realy expensive around these parts, “clean” examples go for 2000-2500 euro minimum, they are popular with hunters and younger people like them as a retro ride and utility car that their grandpa drove.

I was afraid of that. When one waits too long for buying one, the prices can only increase. Especially, after joining the EU where importing them here is no longer a bureaucratic problem. I imagine that they’re not so expensive in Croatia and even less expensive in Serbia.
If your older Cuore is also a 701, there shouldn’t be any problems in replacing the CV-joint with the one of which you bought, unless the Cuore of which you are now driving has an ABS-controlled braking system. The outter joints of an older non-ABS vehicle will not work with this system. However, if the replacement CV-joint was manufactured for an ABS system, it will function in a non-ABS-assisted vehicle

Thanks for the cv info!

Yeah old cars are getting expensive, but in croatia median pay is lower so money from western europe can buy more here, and people like to haggle alot (I personally HATE it) so the asking price is high from the start… 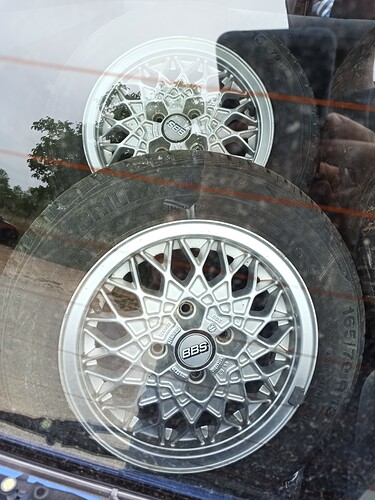 Oh man they will look great in combination with the blue! Maybe some less baloon-y tires?

I like em a bit chunky lol
Tires are good, also size fits ok as it fills the arch and helps with bumpy roads.
When I redo the suspension, will probably get some lowering springs ~30mm max… 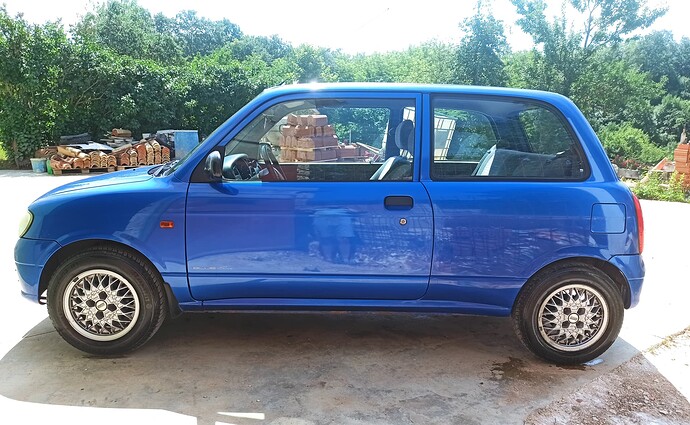 Wanted a tach gauge since i got it, and finally found a nice cluster on german ebay. Its from a m1 sirion with an ej-de engine. After some fidling it was mocked up and tested, it worked ok, and before final assembly I removed the abs light as my car has none (it was on after the car was running)
One thing that is strange is that the fuel level is a bit lower, hope it works ok… 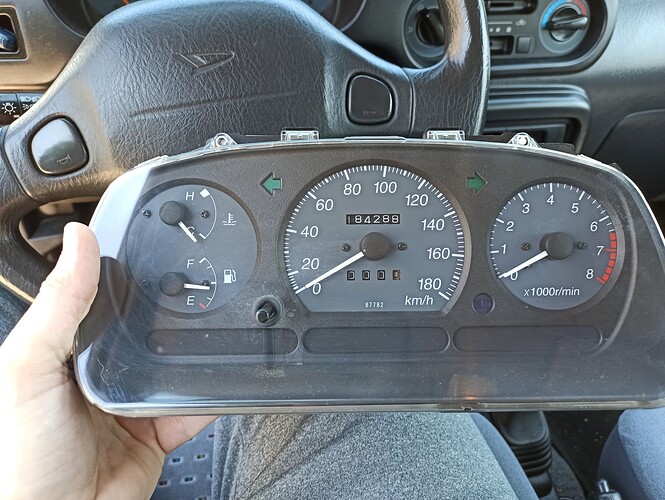