So I’m assuming you’ve read the story about how I met girlfriend and got into Daihatsu’s. I’ve decided to keep track of her wheels here as well, allow me to fill you in;

I met her about 2 years ago, and she drove this small red little Cuore L701, didn’t really know anything about cars but I was already tinkering on my Honda Civic Aerodeck for about 1,5 years. coincidentally, her dad also owned a silver Honda Civic Aerodeck, so we flashed lights everytime we drove past eachother. (she used her dads honda as well sometimes so that’s basically how we connected.)

She decided she wanted to modify her own car as well, and I was super down to help out. this how we started, a bone stock 2001 Cuore 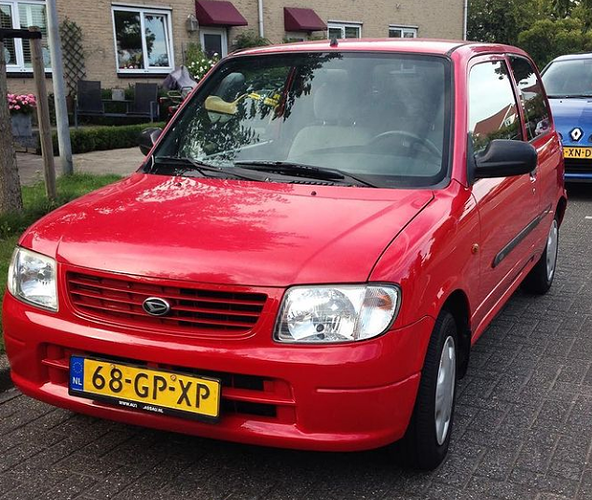 Naamloos635×536 559 KB
this picture was taken the day she bought it, it was still shiny and red here,

Sadly I can’t tell you about everything that happened to this little red monster, but there’s more than enough material on her instagram @daihatsu.cuore if you want to snoop around

this is the current state of the car: 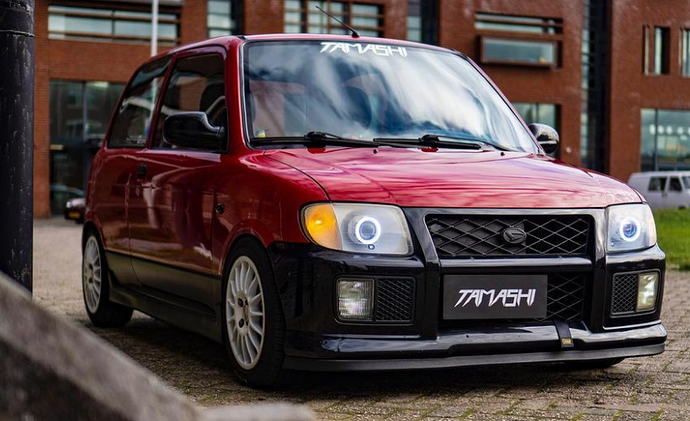 a lot of work has been done over the years, some jobs easy, some sickening and tough. altogether it has earned its stripes and is to this day still, a great car to drive and look at.

recently it had a heart transplant, definitely deserved after 222.222km, the new engine had 73.000km on it and we got the whole donor car for a steal. basically, we swapped the whole engine, and got some spare parts for only a 100 euro’s. which is great value for money.
here’s Lisa and our buddy Ted working on the engines 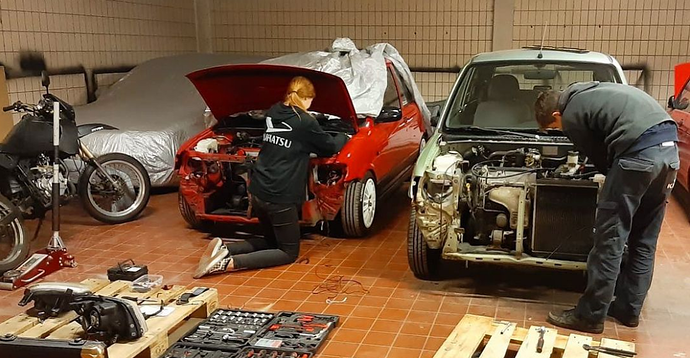 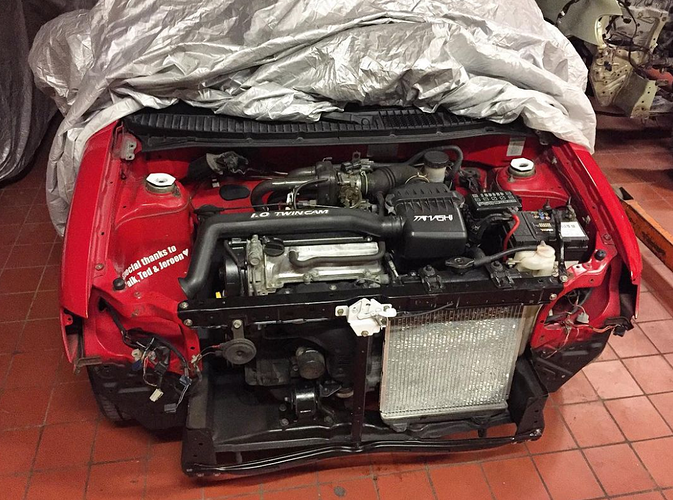 such an awesome looking car

Had some maintenance done after winter, getting this car ready for MOT as well, so stock taillights and headlights, lift it up a bit, orange indicators etc.

Also the rear brakes were a little grindy and noisy, so we swapped some new shoes in. Ready to get through inspection! 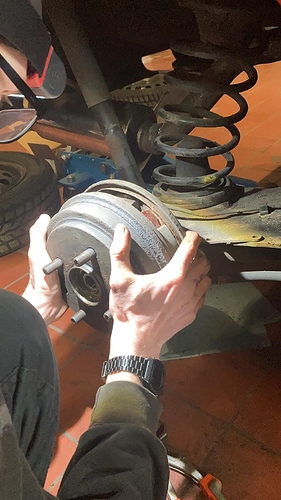 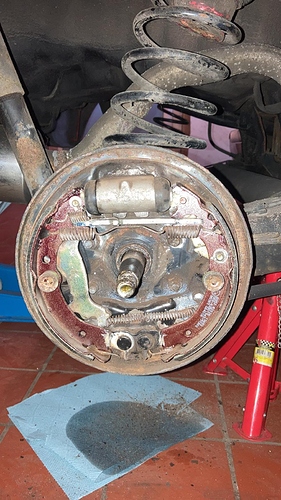 We did a quick lil install today, we still had a four point hatness laying around, so since we were busy we figured we’d slap them in there. I was busy making a neat little metal plate with bolts to weld on the floor, but after almost finishing that, we discoverd here are actually to bolt holes in the floor, covered up with a black sticker. Making the metal plate obsolete.

Got her through MOT, everything has been build back to the way it was and she’s gotten a proper alignment. Back on the road again! 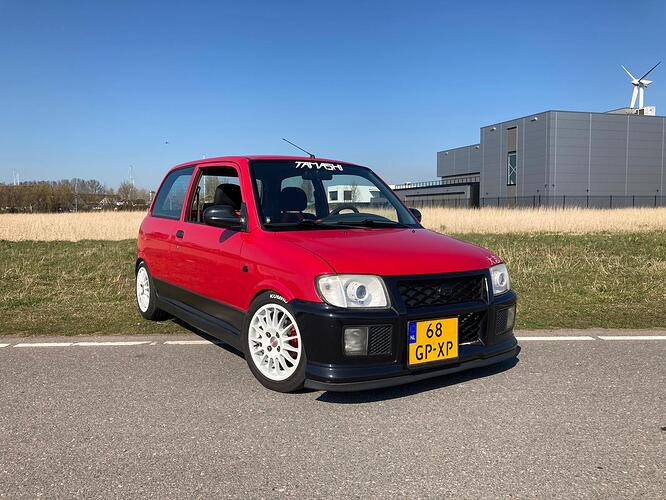 Yesterday she picked up the turbo, it’s in alright shape, but I did find some oil in the intake housing, so a rebuild is probably in order. No axial play, but a small amount of radial play.

Right now I’m looking for a rebuild kit and gaskets. If anyone has a link or something from a trustworthy seller I’d be very much interested.

As said before, parts for this turbo (or generally any jdm spec bolt on) are generally very hard to find here in The Netherlands, so if anyone has helpful links or sources that would be very much appreciated!

Measure the bearing/bush oil groove depth of the original. Many of the aftermarket kits have a slot/groove that is not deep enough to provide proper oiling. These aliexpress ones usually need the groove filed deeper (very carefully). RHF3 kit - Buy RHF3 kit with free shipping on AliExpress

I also added a billet inducer 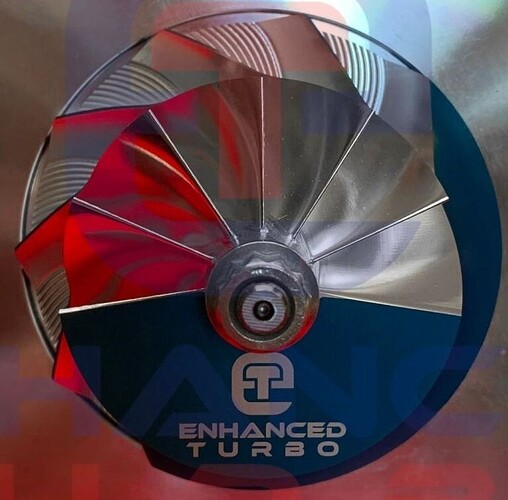 Measure yours and check against these.

I had mine balanced after doing the kit and inducer.

Plus ported the intake and exhaust, and then an external Turbo X coating and THLB hot stop barrier coating to the inside.

thank you Mr Gormsby! I’ll have a look!

Small steps continueing on the turbo teardown. Finally got those pesky torx bolts off! Needed to make a slit in them with an angle grinder and then tap them loose with a screwdriver. Stressful, since i didn’t want to damage the turbo. But i did succeed in the end. Only to find more annoying torx screws, luckily with a bit more well applied, subtle violence, they came out as well.

Up to that moment everything went well, but now i’m somewhat stuck. I need to figure out how to remove the shaft from the turbo core, I’m not sure whether I need to remove the exhaust turbine wheel first, or whether the shaft is pressed in? Sadly there is not much to be found on the internet concerning dissassembly of these RHF3 turbo’s. Same goes for balancing, all things that are filling up my head that google has no answer to.

So taking a break from thinking about how to safely disassamble the turbo further, I managed to clean some stuff up. Being a detailer by trade, this was useless, but quite satisfactory

I hope to continue next week. But first I need to gather some intel about this particular turbo. If anyone has any clues on how to take it apart some more I’d be delighted to know, since google doesnt provide much answers.

The turbo is slowly coming apart. Learned that the exhaust snail needed to be tapped off, so with that in mind i carefully started tapping away using some WD-40 as well. Soon enough the two sides came apart. Great succes.

What was inside did scare me a little though…

I thought this would be the end of the turbo adventure.i was afraid the washer was somehow molten to the core. After chipping away the charred black stuff, i figured it wasn’t going to move and I could never get the shaft out. For some reason I tried blowing air on the exhaust turbine and what do you know, everything popped right out!

Excited to continue on! Now that everything is freed up i cant wait to rebuild the whole thing, get everything balanced and installed on the Cuore!

Also managed to find an Emanage Blue by Greddy for cheap, so we have something to tune our injection with. I’ve heard another cuore turbo’ist used this as well and it seemed to work. The next issues are compression ratios and spark timing.

I’m not sure if the Emanage will allow for the tuning of sparktiming so that’s still on the list.

I’ve read about people boring out the head around the valves to lower compression and using a thicker headgasket. I want to avoid pulling the engine apart for different rods and pistons, but if it’s necessary I might.

not sure about the Emanage, think they are really only for fuelling, but in this day and age alot of turbo motors are up as high as 12:1 compression as timing is controlled by the ecu

yes @Mokeman is right the greddy emanage is only for control.

Opening the head up for lower compression will rob you of low-down performance. Are you building a drag racing engine? You know that opening up the combustion chamber and reducing squish shape will mean more spark advance is needed, and more advance reduces engine efficiency. Sell the Emanage and get an ecu that handles fuel and spark and has closed-loop O2. You can then get a safer tune and far more power than the route you are going even by leaving the pistons and combustion chambers std. If you have to touch the combustion chambers just radius all small sharp edges.

Earlier you mentioned turbo balancing. Pay someone to do it who has the right special machinery is required. No point doing lots of work and having a dodgy turbo that can ruin all your work. I just had one done, $800 with a new bush kit. Worth every cent as they spotted other issues I’d not seen. The result was being able to run more boost safely. Ended up being good value for money power.

haven’t actually bought the Emanage itself, but considering it. I don’t know of any other ECU’s that support 3cil ignition timing and I just don’t know enough yet to program something like that myself, I’m just trying to learn as much as I can from people with prior experience.

of course the turbo will be balanced by a legitimate company after it’s been rebuilt. still need to get that circle off though. seems to be quite stuck somehow, I’ve tried tapping it out from the other side but it doesn’t seem to be going anywhere.

I wonder what ECU’s are viable for this kind of setup and don’t require a lot of programming or specialized stuff. I’m no good with that yet and still need to read up a lot before even sticking the turbo on the car.

these days just about any standalone ecu will run a 3 cyl, depending on how much you actually want to learn, you could try a Speeduino but will need a different trigger wheel, or go to a Maxxecu which uses the original dai setup. they will all need programming as it’s the car’s brain and if not done right mechanical things will either go bang or melt.

Like Mokeman said, just about any standalone ecu will do 3cyl. You get what you pay for, so don’t cheap out too much. Someone might argue this with me but on a dollar for hp value you won’t go past cash spent on a good ecu. As to what you should buy I have no idea. If I was starting over with a new item I’d go Motec all the way. But I am using Autronic in two of my cars. They are old tech but have wideband O2 and one runs a knock sensor. I persist with these as my dyno tuning guy knows them intimately (and he knows Motec too). Find out what you local preferred dyno can tune in ecus. If they do a brand with an autotune option that may reduce dyno time costs. I’ve ruined engines by not spending on a good tune and thrown money down the drain. Short cuts are like gambling with poor odds.