I have bought a set of wheels a while ago, but I’m going to need longer wheel studs it seems. Anyone know the stock stud size off the top of their head, or which I’m going to have to get? The lug nuts are just unable to grab the stud, so it’s going to have to be a few cm longer I reckon.

I’d check myself, but everything has been a pain to work on so far because it’s all stuck and it’s my daily that I have to drive to work every day.

If its the same as mine, then the studs are part of the hub assembly I think? I’m not sure how you’d fit longer ones without having a hub custom made which will cost crazy money?

I may well be wrong…

I was under the impression you can change the studs, at least so I’m told by my more knowledgeable friends, alhough they’re not familiar with the Sirion or Daihatus in general. I’d love confirmation that this is actually possible before I start ordering things I cant use hah.

You’ll need to have a look at the hubs to see if there is a recess long enough to drift the old studs out into, and fit new ones through - basically if it can be done you would need to take the wheel off, drift the studs out backwards through the hub pressing one at a time then press new, longer studs in - again, assuming there is enough room in the recess in the hub

That gives a picture which probably makes more sense than my description above!

The whole job depends on whether there is room behind the plate that the studs mount into for them to be drifted out, and probably more importantly, room for the longer ones to be drifted back in.

Finally, if you think that other fixings on the car are rusted/seized/stuck badly, these WILL be a nightmare and you’ll likely redefine ‘a horrible job’ afterwards! They won’t have moved since being installed at the factory and are some of the most exposed fixings on the car, picking up all the grit, water, salt, mud, poo, dead animal bits, and goodness knows what else that gets thrown up on the road.

I need to swap my wheels front-to-back later anyway so will measure the front studs with my digital calipers for you so you know how much the OE ones stick out. I’ll report back. I’ll also photograph the hubs front and rear to get an idea of how much space you have to play with when knocking out the original studs

OK, here’s the info you asked for.

The studs themselves are 43.5mm long, the threaded section is 25.5mm of this length - both front and rear. Here endeth the good news.

On the front, there simply is not room to drift the studs out. It looks like they are fitted to the hub during the assembly process and once fitted, there is a circular slotted collar behind the plate the studs mount through which means there is not enough room to get them out: 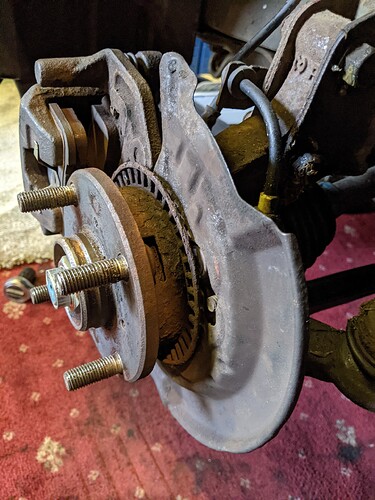 This is the front passenger side hub, you can see that the studs are about twice as long as the void behind the stud mounting plate and the slotted plate/backing plate - so you’d not have enough room to get the OE studs out, and certainly not enough room to get even longer ones in without splitting the hub. It could be done, but will be a major job requiring a puller and a press at the very least.

I didn’t bother getting the rear drum off once I’d seen this, I expect that its a similar story there though, with needing to remove the hub nut & brake drum, brake pads and cylinder, split the hubs with a puller, drift the studs out, fit the new studs and use a press to re-attach the hub assembly.

There might be a way around this, but my garage is freezing currently and I don’t get much lunchbreak from work so this is as far as I could go. One option might be to get a full set of secondhand hubs and split them, sort the new studs etc etc on the bench, then fit them to the car - but having stripped down and rebuilt the front hubs a few times on my M1 Sirion its not a quick job, and WILL immobilise the car if you strip a thread or break something (as me how I know…)

There might be such a thing as a threaded stud extender collar you could screw onto the factory studs, then wind another bit of threaded bar onto the end of, but even if it does exist it sounds dodgy AF and no way would I use them

Wow, thanks for all the information and picture! I’ve had a friend take a look at it and he reckons it could be done. I don’t have ABS so I might have bit of extra space if we’re seeing it correctly.

daihatsu are generally M12x1.5 you could get M12x1.25 for a safer thread just have to get new wheel nuts as well as the studs

Also, if you’re fitting new wheel studs, make sure you get ones which are adequately long - for an M12x1.5 stud, you want to be winding on at least 8 full rotations of each of the 4 the wheel nuts, ideally more like 10 or 12 if you can. with a 1.5mm thread pitch, that means you want at least 12mm of threaded section poking out through the wheel holes, and ideally more like 15 or 18mm. Bear in mind the nuts are blind, so they can bottom out - so don’t go crazy and get super-long studs.

Hi mate, I have some experience with this.

First of all in order to change the studs you’ll have to press out the hub, at which point you will also need to replace the wheel bearing.

Afterwards you can unscrew the abs ring and press out the studs.

Studs from Smart Car fit and are a few mm longer. I have included all information with part number is in this thread:

At a later date I installed super long studs, they were listed as being for a Ford escort mk2/Opel