I’ll check this tomorrow, I don’t know how much a little bit of oil would smoke but you have to understand that it was just pouring smoke. Like a stupid amount for only a few drops of oil.

Time for more diagnosing today, it seemed to smoke a lot less, but it still wasnt alright. Started with checking the oil level. It consumed about 500ml from my workshop to home. Which is a 20 minute drive.

Tore of the exhaust manifold today and see this:

Also i’m afraid i’m not exactly up to the task of doing this all by myself. Best I can do is start gathering up some parts and call friends to help out.

God it just sucks so much, just got this car back on the road and it took a shit on me within 2 weeks. This is fucking ridiculous.

Just to be sure, take off the valve cover and see if that tells you anything. I know “Dave’s” valve cover gasket is shot, and can cause some leakage. It’s probably not the cause for burning 500ml of oil, but there might be something else going on that can be seen underneath the valve cover

Damn, wish I could help but this is something I don’t have experience with

The thing has been torn down already, we’re close to pulling the head but we needed some extra tools, tomorrow we will pull it and inspect the head gasket and valve stem seals. I’ll have to scout for all these parts but they’ll be replaced eventually.

The thing I’m more concerned about is the pistonsrings, since these are of course an infamous weak point. I did a compression test and all cilinders sit around 13 bar. But factory spec should be 15 to 17 bar.

Theres been a very sudden performance drop, piston tops are covered in oil, i’ve got oil coming from the valves into the exhaust ports. It’s been a real party lately to say the least.

I’m honestly on the edge of just buying a sirion and swapping in a K3 cause it would be a lot less hassle, more expensive, but less time covered in oil, snapping bolts and keeping track of which cam is which, torque specs, clearances, the lot. Morale is quite low at the moment i’m not gonna lie xd

State of things right now, head is off, valves are out, pistons our out. We are now replacing everything, valve stem seals, piston rings and headgasket. It’s been a ton of work but most of its been done by a great friend and master mechanic Dani, who is making things happen and putting in real hours.

So as you can see, lot of oil deposits everywhere.

Time to clean everything up, source parts and put the whole thing back together. Honestly I’m in way above my head and knowledge of engines. But thank god Dani is here to help out! Wish us luck!

Did a lot of cleaning up today!

Also did some porting on the exhaust side, maybe not the best porting job ever (be gentle it’s my first time) but I figured since I was there, might as well match it up to the gasket.

Intake side looked pretty matched, so didnt remove any material there.

With the head and pistons cleaned up. All that’s left are those yucky valves. I’ll need to ask Dani on the best way to proceed. We have some lapping tools etc but I need to know the best way to tackle this.

Gaskets and valve stem seals should be arriving tomorrow. Right now I need to find some new piston rings. Anybody got any hints??

Concerning the rings, have you contacted any Daihatsu dealer so far?

Alrighty! After calling with a dealership (one of the only if not the only remaining in my part of the country)

I actually got laughed at…? I asked about pistonrings and the salesman guy (he was definitely not a mechanic) said “impossible! Who broke the car cause the pistonrings in the L700 are practically indestructible.” Not actually listening as to why i had opted to replace the piston rings as well but okay. I know the rings probably don’t wear out that much. But its still a 20 y/o car. And i’ve been told for years they just shit the rings out at 200.xxxkm. Now, this car is nowhere near that but were replacing these just to be sure.

Anyhow after dealing with this salesman type I got handed over to the actual inventory guy. Told me he can order the rings from Germany and they’d be here within a few days. I said let’s do it! He said, okay i’ll send you the invoice by email and once you’ve paid we’ll order them.

I never got the invoice.

So I called em back the next day, turns out something wasnt going right with email. Fortunately, the old Daihatsu dealership (which is now officially a Suzuki dealership) was close to my home town. So I hopped on my my motorcycle to go and pay the invoice.

Jan, the inventory guy was actually super nice and friendly. He immediately recognized my voice had everything ready for payment. I grabbed my card and paid for the ring kit. (110,- euros if you’re wondering. Quite a bit of money for some rings, but I wanted OEM so its alright.)

Then Jan said this. “Sorry I have some news, i had a really good feeling about you and your story. So I already ordered the rings! They came in this morning”

So basically Jan had ordered the rings already without me paying for them and just blindly trusted me. Which was such a nice gesture!!

So I hopped back on the bike to bring the rings to the poor L700 in need, look at how cute the packaging is though!!! 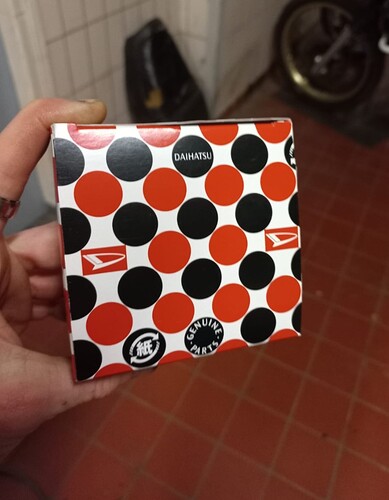 So now we had all the parts to finish up. Then, of course, I got sick last friday and spent all weekend at home… today I’ll be heading back to the workshop to do some more work but it’s been delay after bump after halt after issue blah blah blah.

Hope I can get some stuff done this week and get it back on it’s feet the week after!!!

Odly familiar to get laughed at by a dealer… The guy also told me that part never breaks. Even after confirming that the part was indeed broken he came back to me with an invoice of 110 euro, the same part was online (incl shipping) just 20 something.