First things I did was to fit the lowered Monza springs ex Malaysia, fit the 12x4.5 Black Racing rims ex Kemotorsport, replace the split radiator and remove the worn out rear muffler and replace it with twin pipes. But as you can see the ride height drop isn’t enough and the wheel to arch gap is still too big, particularly in the front.

Since then I’ve on sold the BR rims and purchased 13x5.5 Performance rims. I ended up having to have two of the rims straightened then I had all four sandblasted and repainted. I sourced the tyres online from Tyroola and had them fitted here in Perth. Also had to change wheel nuts, they still used tapered nuts like the steel rims but the taper angle and size were different. All up the excersise cost me $600, almost the cost of the car which was $750. This one has the less common EF-GL, so the 12 valve twin cam but with a carburetor and mechanical fuel pump for fuel delivery with spark controlled by a distributorless ecu controlled coil over plug setup.

I had some carby issues earlier in the year, basically the fuel filter that had been on the the car since who knows when had broken down internally and let what ever crap go through it, blocking the jets. Ended up replacing the filter and popping the top of the carby off to pull the jets, etc and reverse flushing it all out. Worked for awhile but now it runs rich and splutters at full throttle. Also the auto choke is stuffed.

Had a small short circuit the the main steering column loom connector. The headlight pins were over heating due to to bad connections. New plugs and pins sourced from Jaycar. I did have plans to fit an AMR500 supercharger, but I figured it would cost me too much for the install so I sold the unit.

I’ve now purchased a Weber 36IDF suitable for rebuild. It’s currently stripped and in a bucket of mineral turpentine while I wait for the rebuild kit. I’d love to make it efi with maybe the efi intake side of the 1ltr sirion engine along with the factory loom and ecu or even transplant the single cam efi engine that came in this model L5. But all the cheap stuff is over east plus I don’t know anyone in the Daihatsu scene in real life so I’m doing most of this by myself.

Looks good, noticed the plates, that was a good club back in the day. I’m in WA too.
If you need any jets or emulsion tubes for the carb let me know I have a fair few left over from tuning a twin IDF setup on my Escort.

Nice write up. All interesting . I’d go efi. Ecus are cheap these days. Jets, chokes, emulsion tubes and so on all get expensive. I played with weber dcoes until the early 90s.

If your L500 is to look at then slam it low and fill those wheel arch gaps. If you drive it my extensive experience says don’t go any lower. Do you know the front and rear spring rates you have used? Good call getting rid of the amr500. They are a novelty that make more heat and noise than power.

Thanks mate, might have to take you up on that. This one was a pair on a VW Bug, not sure on it’s engine size, but the second one was destroyed in a crash I was told.
Joined AFARCC back in 1999 but haven’t been active in the club for years now.

I had a go at making the ef-gl efi but sourcing a factory efi manifold to suit proved too hard, I believe the ej-de manifold should fit.
Right now it’s a daily driver, mostly to get me to and from work. I’m just not the biggest fan of huge wheel gap. I’d just have to go coil-overs if I wanted more low.
Spring rates I haven’t a clue sorry. I just had Tom Wood order some lower springs from Malaysia and had them sent to me direct.
I initially purchased the supercharger as I’ve had plenty of turbo cars but never had the chance to own or drive a supercharged vehicle. Anyway, it would of cost me more than importing say a turbo ef-rl engine package minus gearbox from a 2wd trxx so I got rid of it.

If it understeers (and it probably will) then the front is too stiff and rear is not stiff enough. To go lower in the front without knocking your teeth out and to ensure mid corner it is not hitting bump stops a shorter strut leg is needed. For example, here are my first set The top is a std strut. The bottom one has a cut down Koni inert (I remove the insides from the insert and mount in the shortened leg. When you go quite low the control arms may not be near parallel enough to the ground and point upwards away from the centre line. As such they loose any negative camber they might have had very quickly. As such the inner control arm mounting hole needs to be raised up (which can be done by solid mounting the K frame to the body and loosing the rubbers (still needs something to centre the K frame on the pin/bolts)).

To be honest I haven’t pushed it hard enough to understeer, I’d be worried about rolling it haha.
So basically what you’ve done with the struts can be accomplished with coil overs?
I have a fabricator friend who’s partner is a fabricator / machinist who could knock up some solid mounts to locate the bolt and k frame. Although looking at it, to lose the rubber mount you’re looking at roughly a 10mm drop?
I’m not urgently needing to lower it more at this stage, it’s been that height for around a year now. Just trying to sort the engine out and make it reliable.

Thanks for your very informative suspension advice

Slowly scraping off the yellow foam and glue from the roof. My car was missing the roof lining when purchased, just had all the foam which would brush off onto my head haha 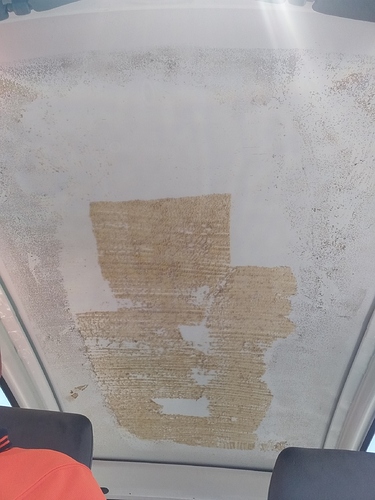 Not sure what I’ll put up therethere but I do have the side strips from my old L80, although longer than the L500 roof so will require triming. Have some astro turf I could fit

So managed to do something, not sure yet, to the 4 speed manual.
Driving to work it suddenly fell out of 3rd, I had to physically hold it in position, I found I had to do the same with 1st. 2nd, 4th and reverse were perfectly fine. Got to work and checked what I could, engine mounts looked fine, cables still in position and secured.
Drove home after work , 1st and 3rd would now stay in gear but felt sloppy and the gearstick would travel too far when going into 1st and 3rd.
Yesterday I got under the car. Found that both drive shaft seals require changing, but due to the amount of oil I couldn’t tell if the selector shaft seal was leaking. If anyone can reconfirm the gearbox needs to be split open to change the selector shaft seal that would be helpful.
I couldn’t see anything mechanically wrong outside the box, except the gear selector cable bends at a right angle when in 1st and 3rd, does that seem right?

I’ve also got my 4sd from my old 1988 L80 that had the ED10 engine. Apart from a different style of selector linkages, would that gearbox fit onto the EF-GL? If I It does then I can just change the axle and shaft seals on that and just swap boxes with little down time.

Let’s give this a try to help stop the leaks while I figure out the gearbox issues.

Unlikely to work. But heck I’d be interested to know if it did. Just open the box up. Easy job.

Didn’t break the bank at $11 on special. But yeah, I haven’t come across many magic additives that have worked. I believe that basic principle is to swell the rubber seals so they seal again, we’ll see.
Splitting the box is definitely easy, the only reason I hesitate doing it to the one fitted now is the car is my daily driver. So say if I split it on a Saturday and I can’t find the seals needed that day I’m buggered for a car on Monday for work. But, I can take the chance.