Long time reader, first time poster… I’m Rob, a 21 y/o dutchie with love for stupid 90s japanese shitboxes. After owning a L276LS for some time, I finally got the “perfect” L7 I’ve been looking for… 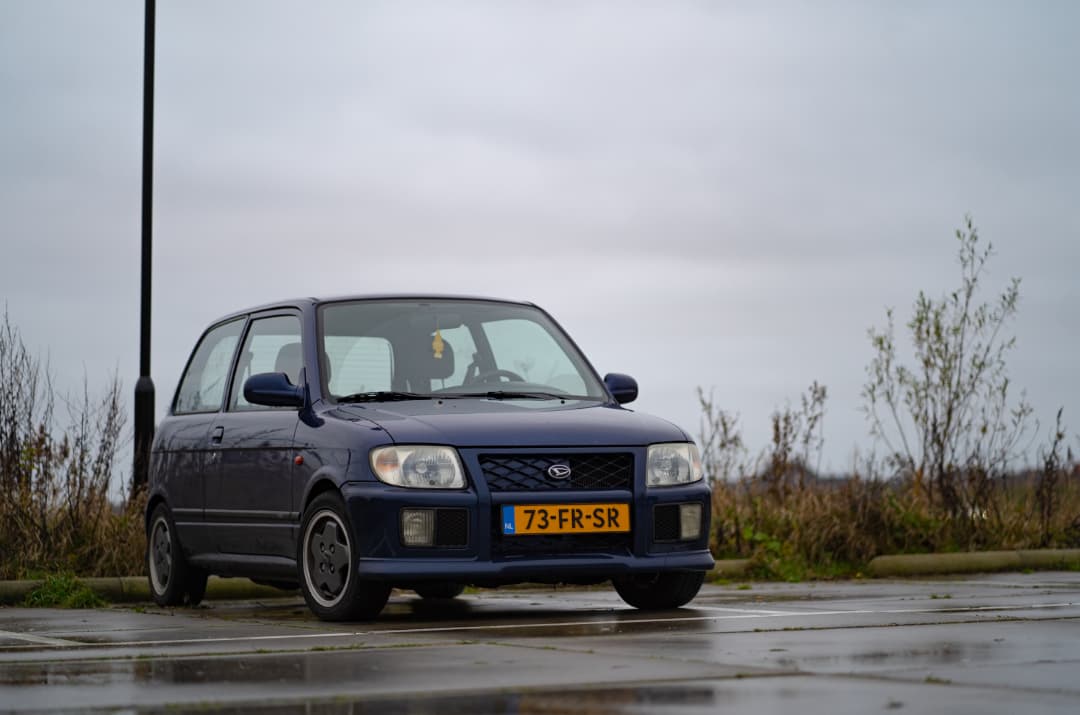 This example started life out as an STi (Dutch base model), getting much love from previous owners including;

Not sure what I want to do it, since it is supposed to be my daily driver. My dad (who had multiple G100/G11 turbo’s) is pushing me towards a CB swap, which could be interesting. An EJ-DE+T build would be interesting, but then there’s the reliability factor which pushes me more towards a K3-VE2 or K3-VET.

Anyways, I should probably get my Legacy Turbo back on the road first, before I even touch this at all…

Welcome and awesome looking unit. Would like to see more pics.

Welcome. Glad you have joined us. CB is a bit rare. You’d have to be quite sentimental or romantic to go that way. The pragmatic choice is the K3ve2. The racer in you (drag racer that is) will want the VET. For a road car the K3ve2 will be enough and have you up and driving more quickly than any other transplant. Spend the extra effort on Copen front brakes, a disc rear end and some good struts, rear dampers and stiffer rear springs (leave the front std). That’s my experience. Keep it off the road for the shortest time. Get it up and going as soon as you can.

if you did go the turbo route on the EJ, you would need a standalone ecu tuned properly to make it reliable and would only end up with around the same power as a standard K3-VE2 or pushed up to a standard K3-VET. I am lucky enough to have driven an L700 that has been K3-VE2+turbo swapped and WOW is all i can say

Plan is to have a fun little road nugget that I can take out to local “touges” and maybe do some autocross in. That’s why I like the low end torque a turbo gives, although that is the main thing breaks these gearboxes from what I’ve read.

Really interested in a disc rear end but haven’t found a lot of useful info about it yet. Do you maybe have some guides available?

I think you’ll find a na k3ve with a light flywheel will give you the low end immediate response, and be easier on boxes.

It’s been years now since I’ve done a Dai disc brake conversion. All the ones I did were on L200s, but the process should be similar. This is a little info somewhere in the “Not quite Track” thread. You would need either Daihatsu Appluase rear callipers, back plates and discs or some Mazda Mx5 callipers are the same casting but you’d have to check the MX5 disc for fitment/offset and make some backing plates. For the hand brake you can use the original cable but a couple of adapters need to be made on a lathe.

I had forgotten about option of using the drum as hub/carrier for the disc. If using the Applause hub the inner bearing may need to be swapped to suit the stub axle.

Did a couple of things last weekend. Got my hands on a generic boss kit and installed it together with a Nardi Classic wheel I had laying around. 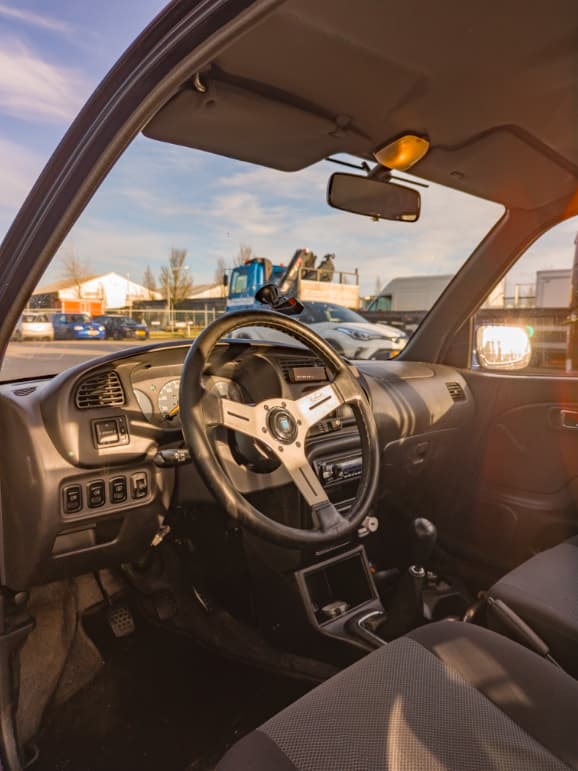 By request of @BoldEagle, I went out and took some better pictures of the car. 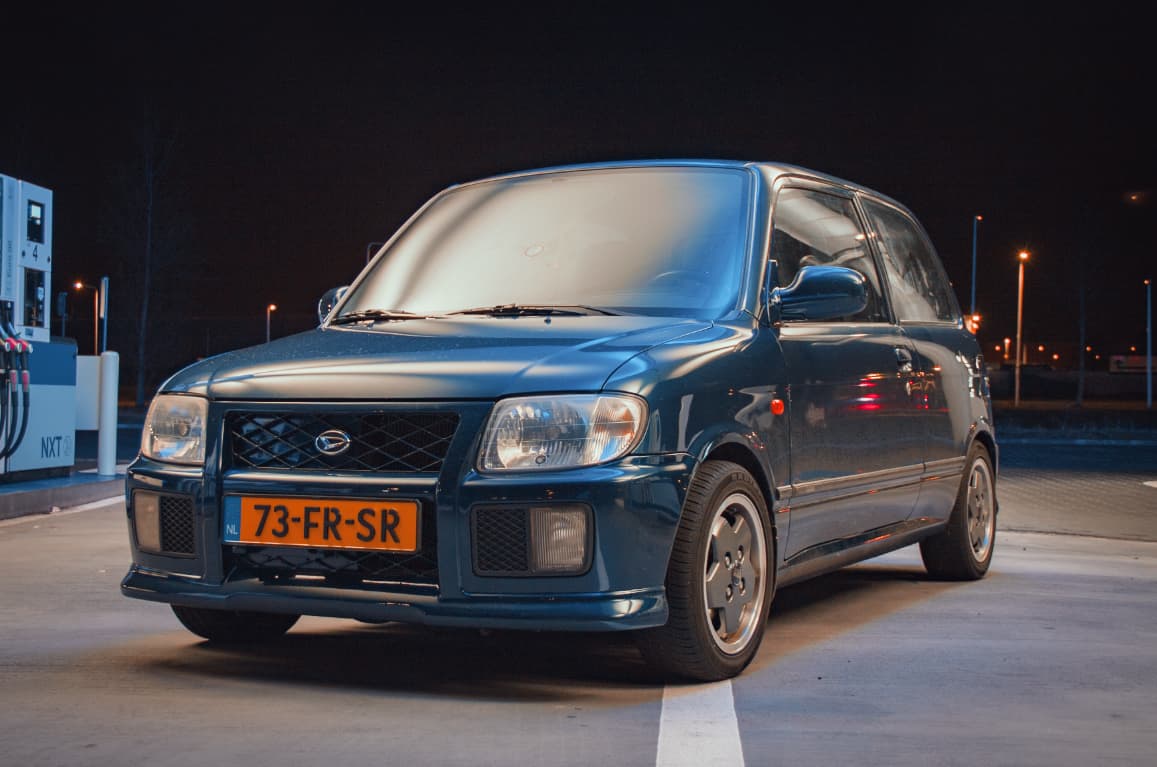 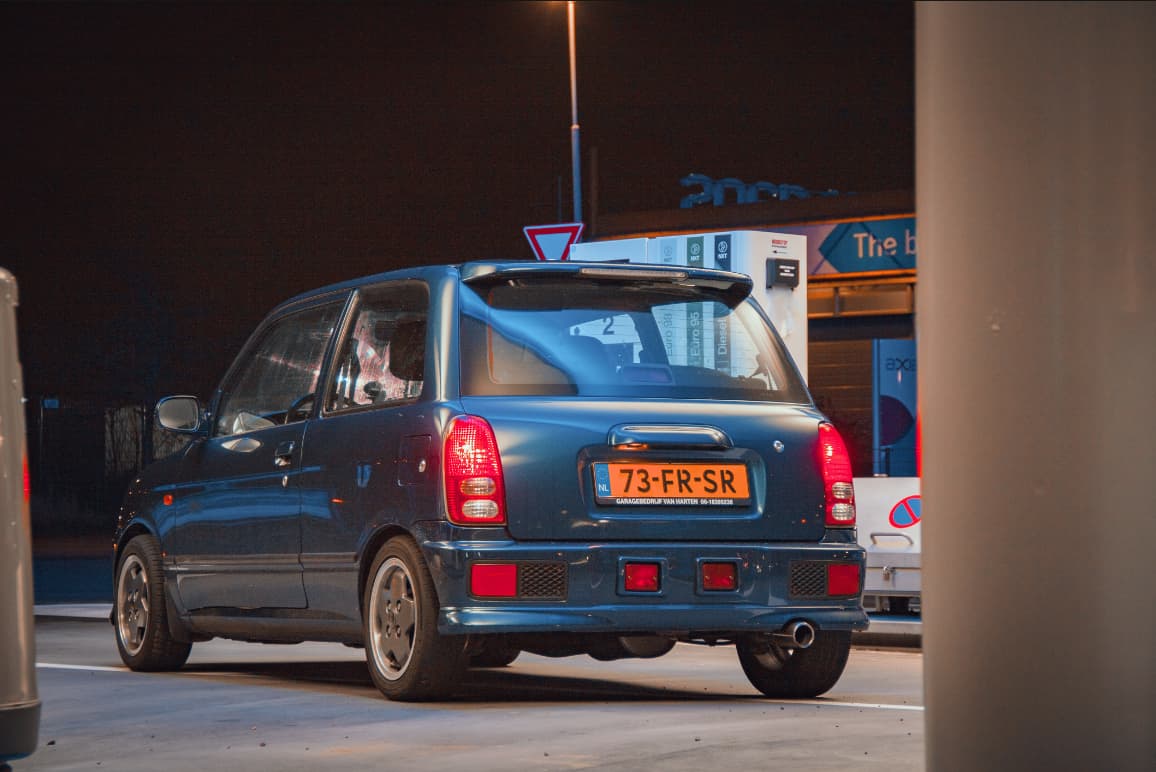 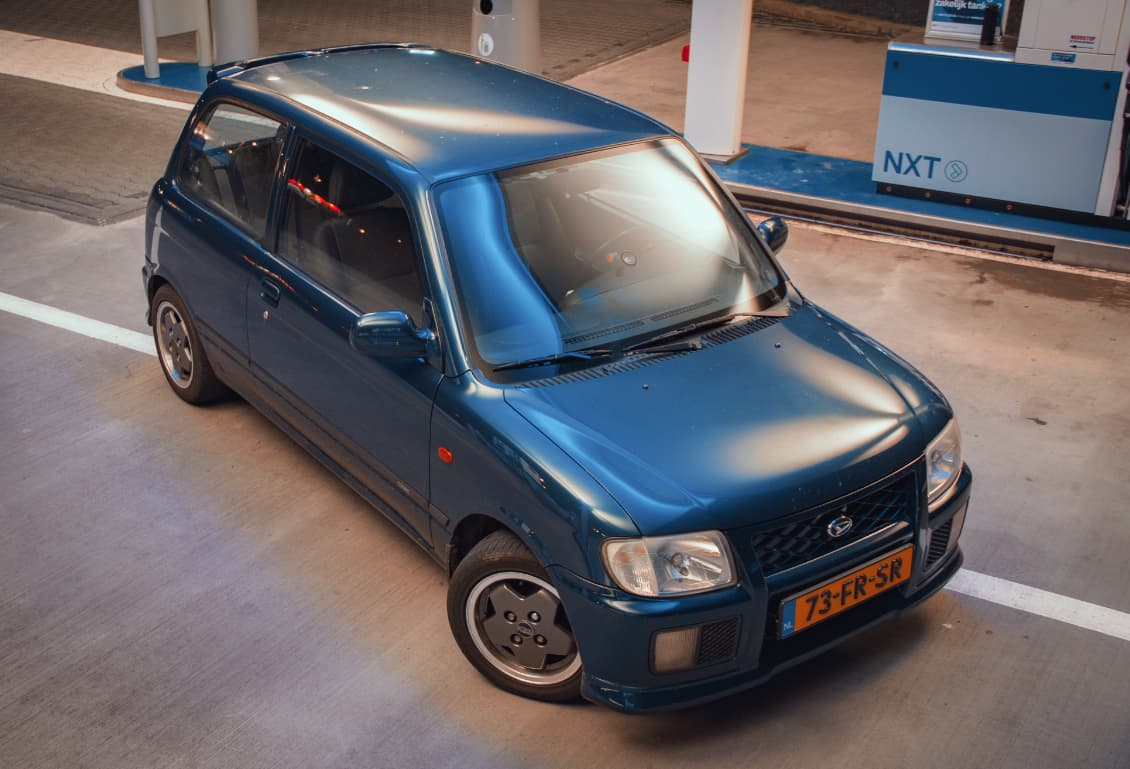 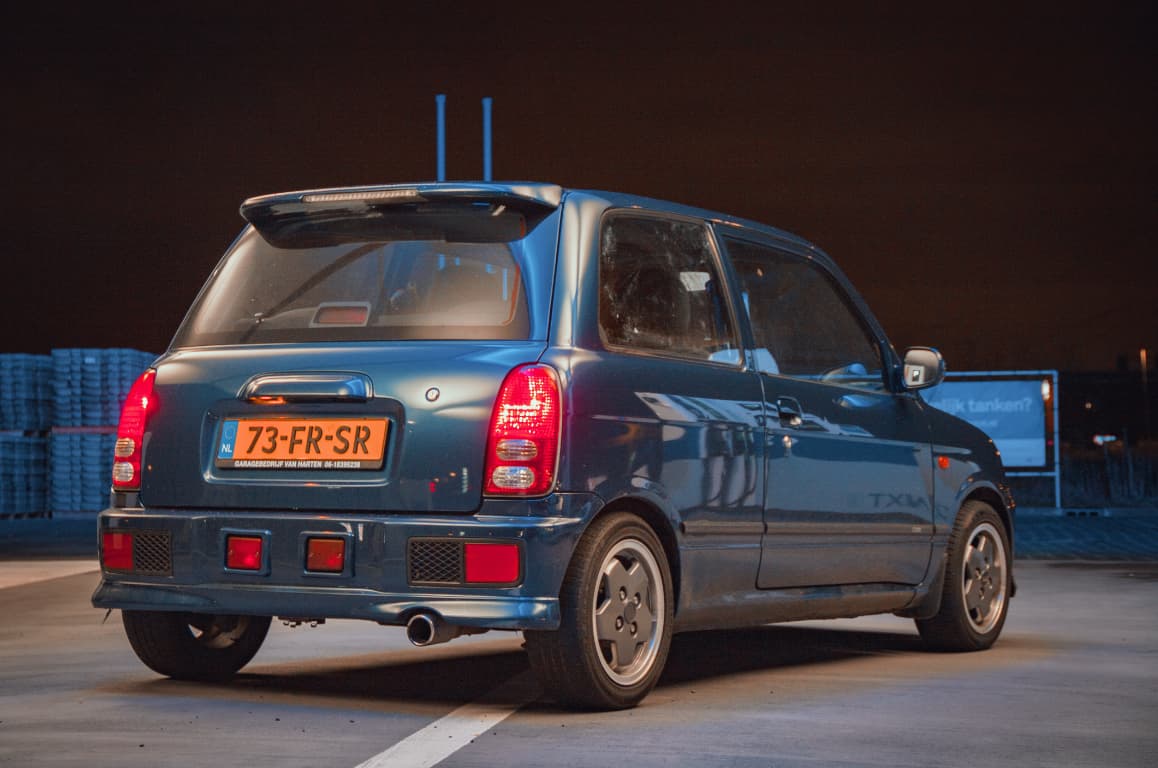 Tyvm they are some excellent shots and it is a good looking unit.

Hey Rob! Nice ride you got there…again
I touched it.

If using the drum as the carrier then it is simply swapping out the L200 bearings and putting them in the Sirion/cuore/L251 drum if they do not fit properly.

Soooooo… A lot has happened during the last few month, including me technically “totalling” the car

Didn’t feel like taking my bicycle to work one day, when my neighbour decided to back out of his parking space, unaware of me cruising down the street. All which resulted in a mashed front fender, cracked paint on the bumper and a bent control arm. 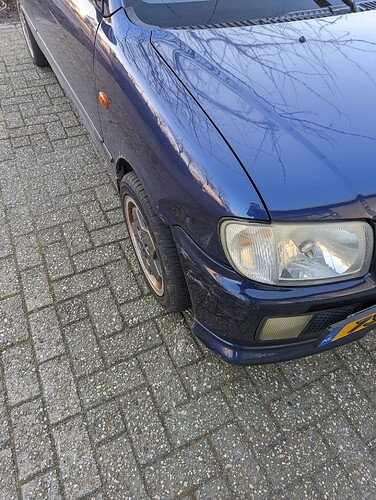 The car was valued at €950 and the insurance company offered me the option to buy the car back for €250 , leaving with me €700 to fix the car. After diagnosing that the lower control arm was bent, I took no risk. Ordered new control arms left and right, while also doing steering balljoints, while also replacing the rightside knuckle due to the slim chance of it being bent (had some bad experience using knuckles from a crashed subaru)

Went to a scrapyard 30 mins away with a mate, only to discover another blue turd, with a MINT right front fender. Right to work we went! 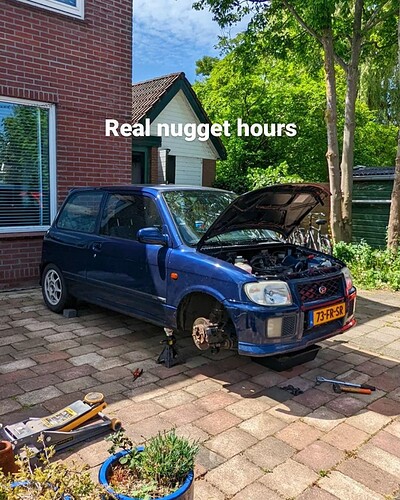 After everything was fixed, I sent her of to the yearly mandated inspections, with the hope it would pass, not knowing it still needed a shitload of work after it had seen a fair mount of neglect… The repairs needed were:

After fixing all of those items, including installing new rear brake shoes (literal hell after the autoparts store gave me the wrong ones two times in a row) I went back to inspection and finally got the little nugget back on the road after roughly 2 months of searching parts, waiting for the insurance company and fixing the car itself. … 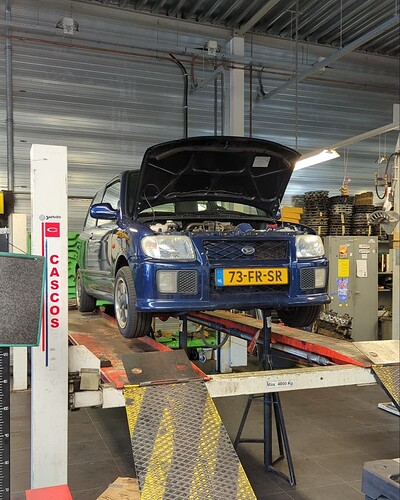 Due to my Subaru needing quite some work, not being able to access it and having little to no motivation to get it back on the road, I wanted to visit JAPFEST with the Cuore, which was only 3 days after it passed inspections.

After I got it back, me and some mates decided to give it a good wash, and fix some minor things just before the event. We went to a mates shop to hang out and chill, work on shitboxes and put on some stickers (including a window banner obstructing 90% of my view) and I decided to shoot some moody pictures on an old Nintendo DSi. 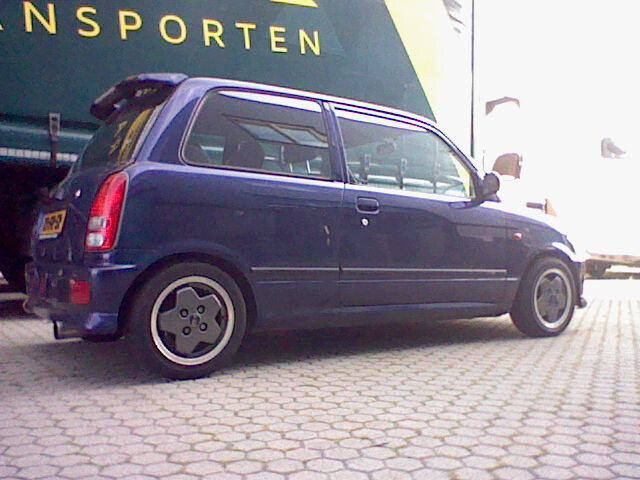 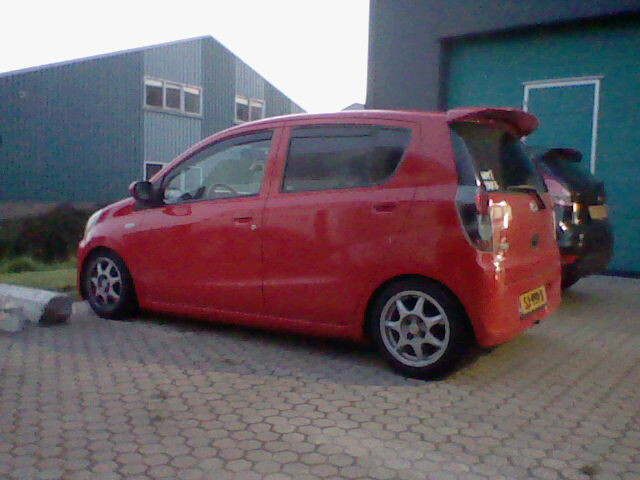 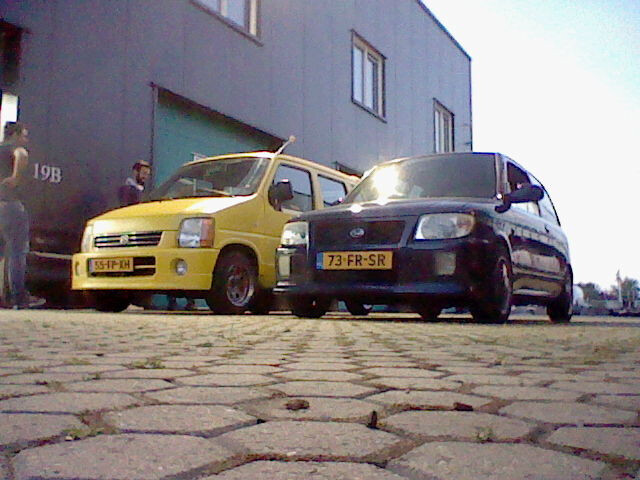 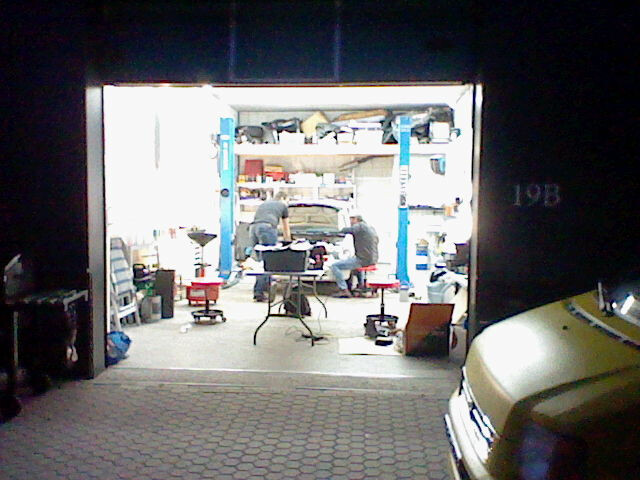 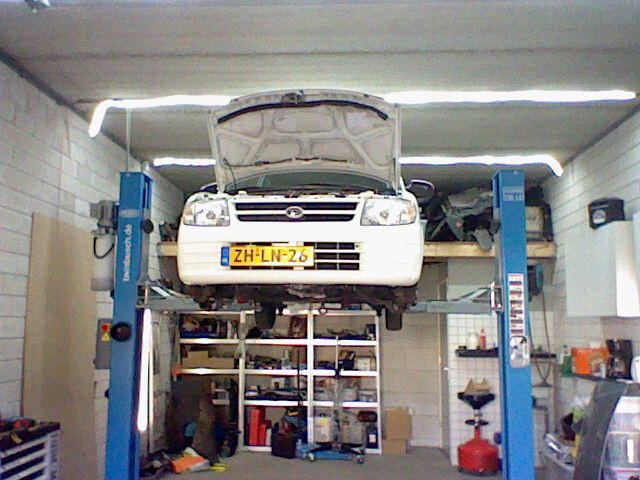 It was around 1 pm at night, when Klaas (owner of the Red L276S) came with the dumbest idea. “Yo let’s wake up early, meet at the shop around 8 am to polish your nugget and put on a glass coating”. Us being professional idiots, barely slept and woke up early to detail a little nugget like its a fancy high end sports car. 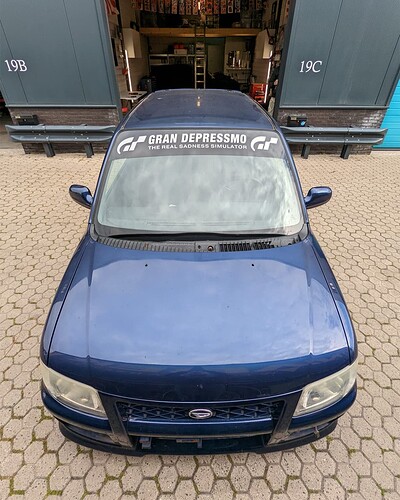 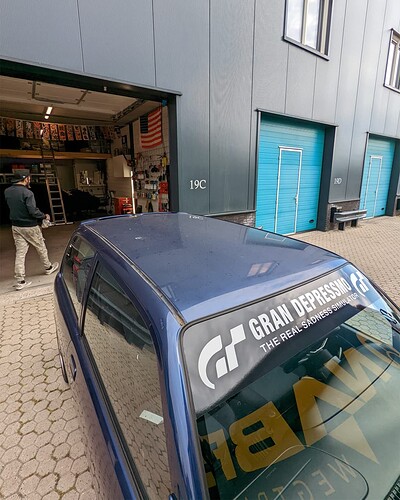 While polishing the car, we also decided it was a good time to remove the ugly door strips. 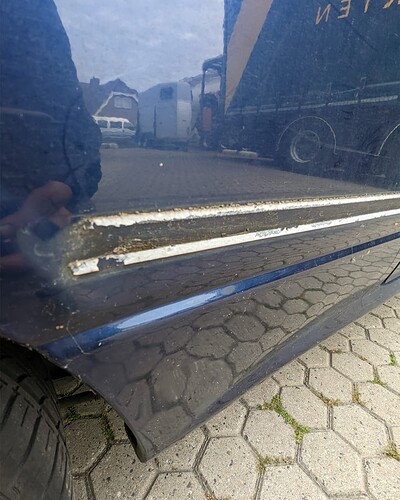 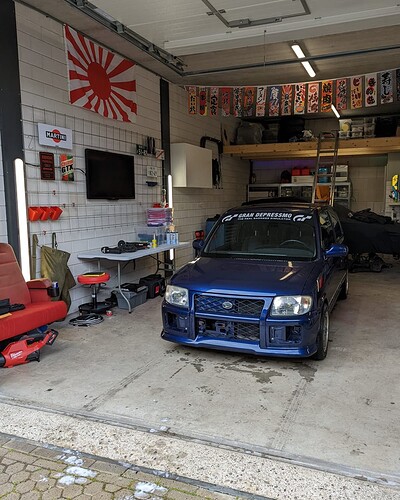 Progress was made really quickly, and another mate showed up (also a detailed) at started helping out! It looked so freaking good! 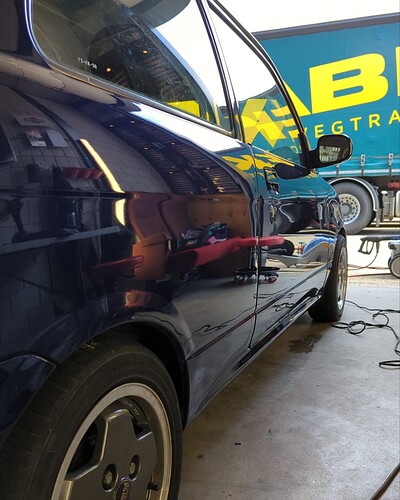 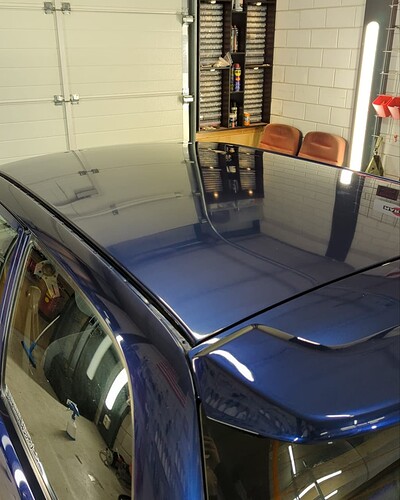 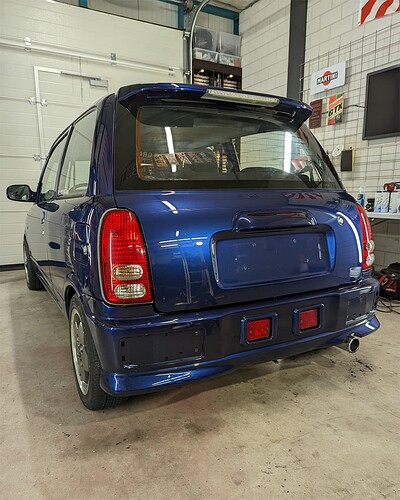 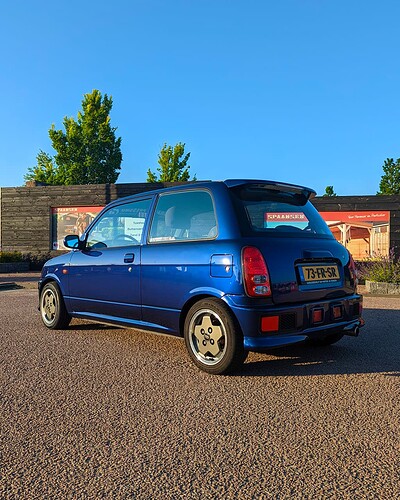 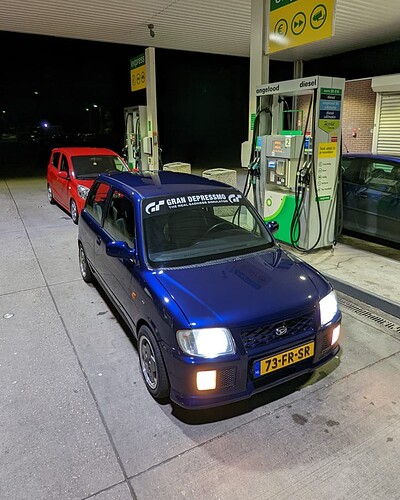 Went back home, prepared some stuff for the event like tickets etc and got a good night sleep. Japfest was going to see the nuggiest nugget of all time.

Sadly I didn’t take a lot of photo’s of the event, but it was great and I met a loads of people. 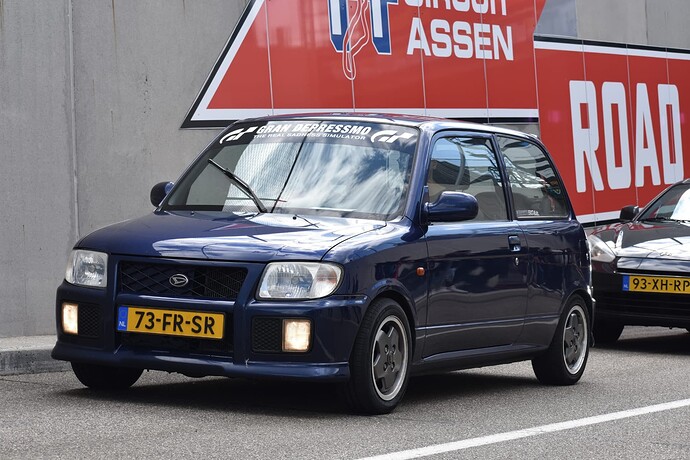 When it was time to go back home, it started to rain and the roads became fairly slippery. This is when my and my passengers found out, this piece of shit can drift, and ofcourse us being complete idiots we filmed it all… 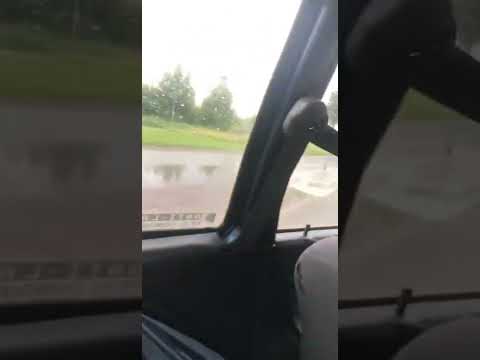 Last weekend we also installed some JDM Mira window visors, which I had laying around for a long while now. (and by we, I mean my mate because I was too busy taking pictures) 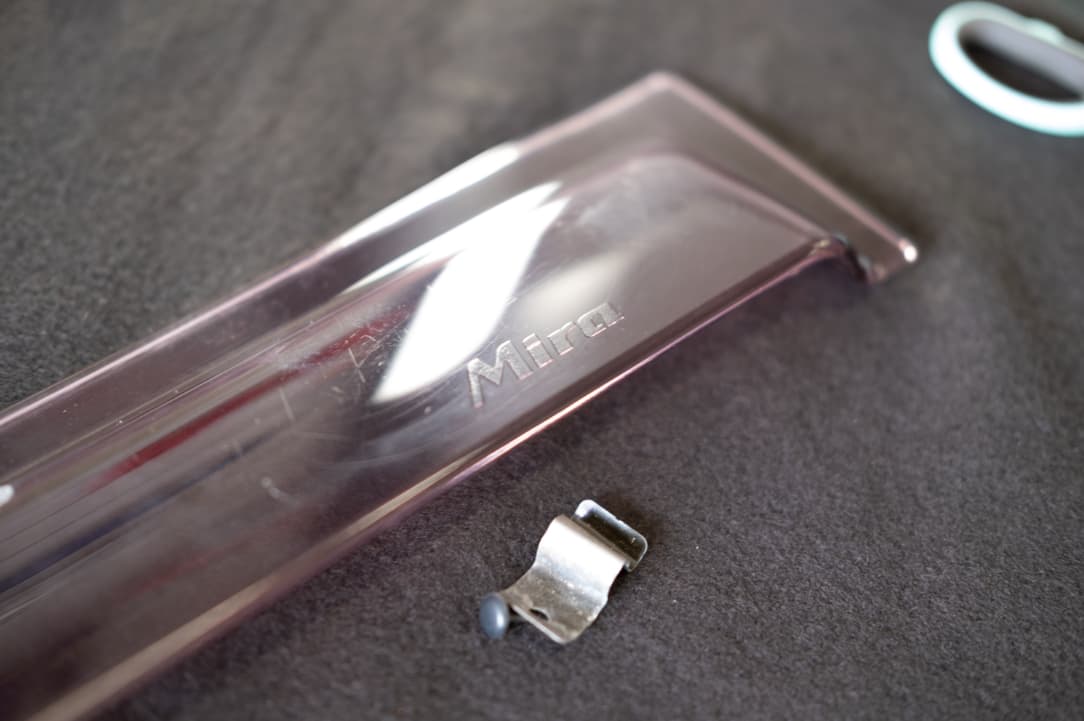 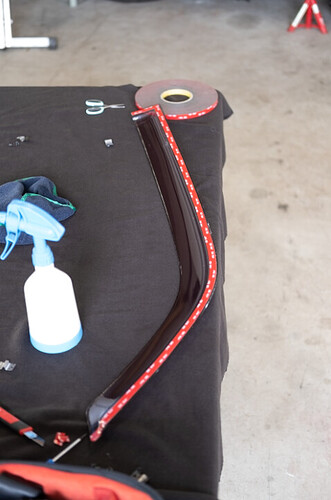 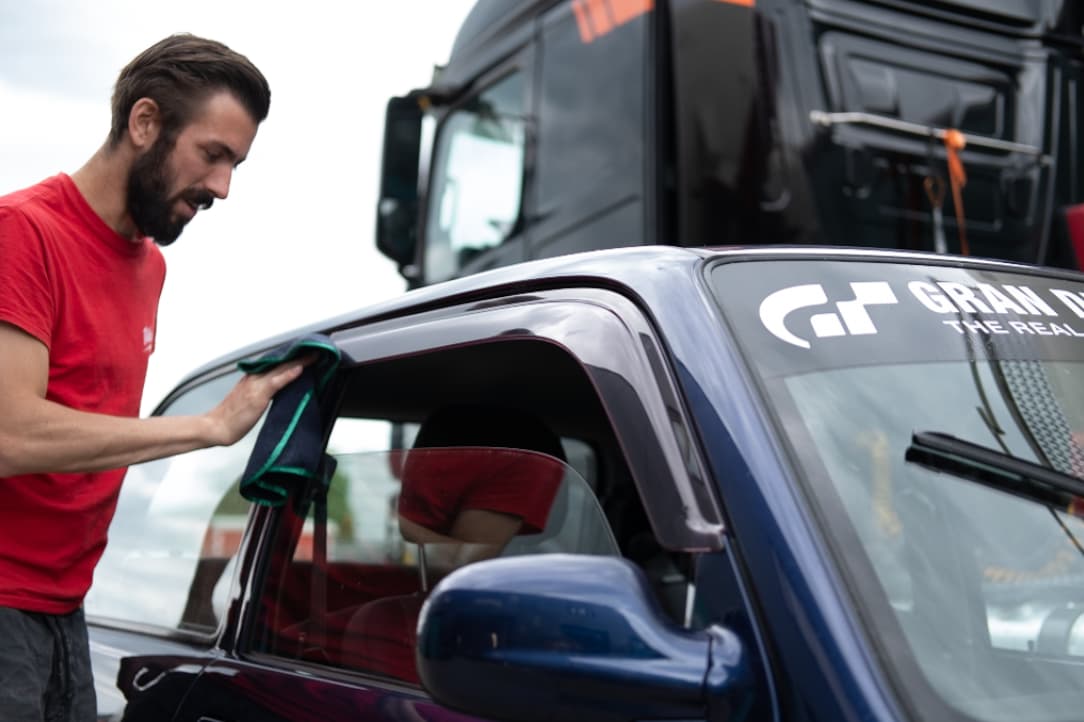 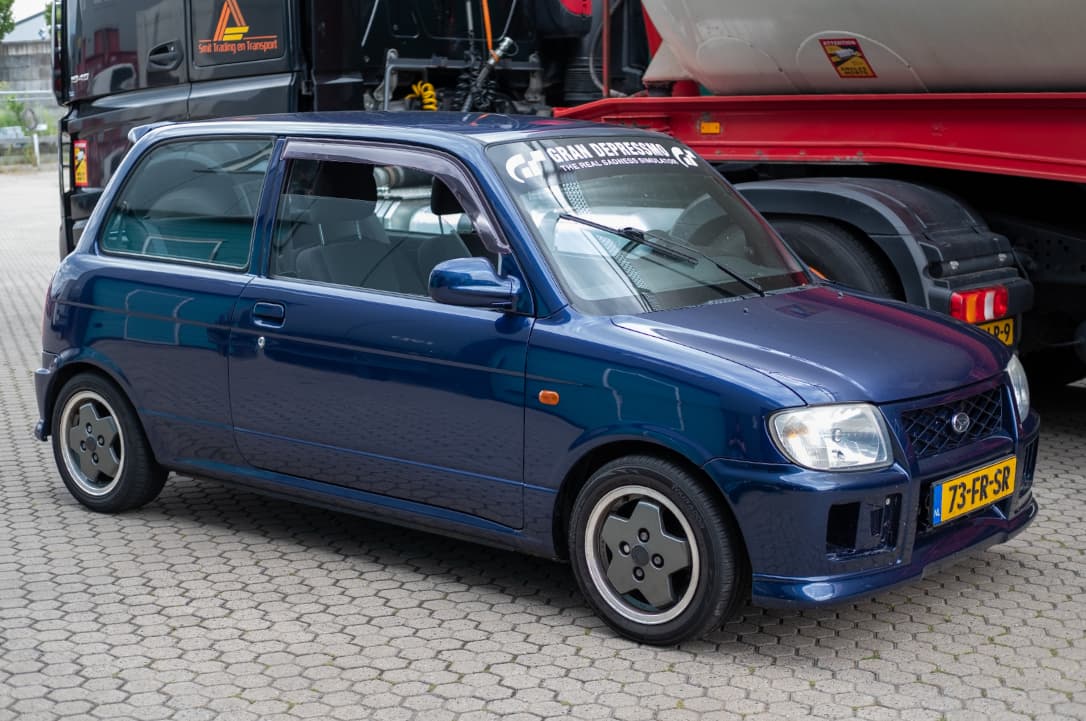 As you might have noticed, the front foglights are missing. One flew out on the highway, and me being paranoid I decided to take out the other one as well since I dont trust the original mounting hardware. Also installed some new audio components, but haven’t finished the doorcards, so that 's for another post soon…

Well done on fighting through the adversity it gave you. I love the window banner. It made me giggle and the car is looking great well done!