A study of anti-dive characteristics on the M1 chassis, with a proposed improvement

Anti-dive, what is it?

The Anti Geometry classified as Anti Dive and Anti Squat refers to the design of suspension setup which alters the response of its components during braking and acceleration. Anti geometry affects the pitch movement of car as the car dives or squats. 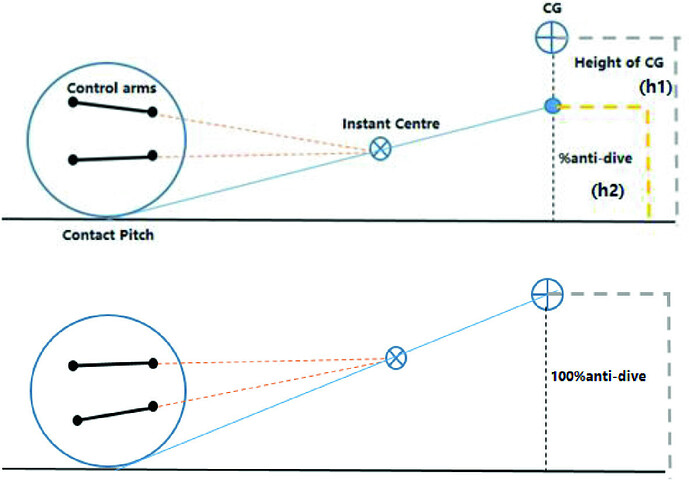 How is it measured?

First the instant-centre is determined by following the lines established by the control arm mounting points untill they cross. In the case of a McPherson strut system, the upper line is drawn perpendicular to the theoretical steering axis, which is found by joining the strut top pivot to the lower ball joint. 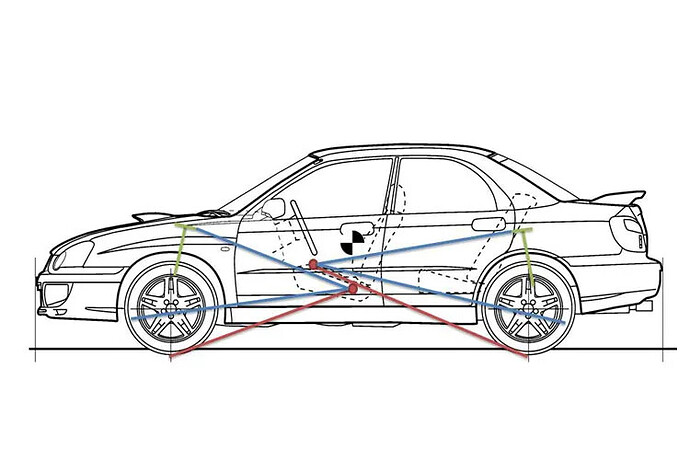 For calculating anti-dive the wheel base of the vehicle is divided according to brake bias, and at the bias point a line is drawn upwards to the COG height.

Next a line is drawn from the tire contact patch through the intant-centre. The height at which this line crosses the COG/brake-bias marker determines the amount of anti-dive in %. 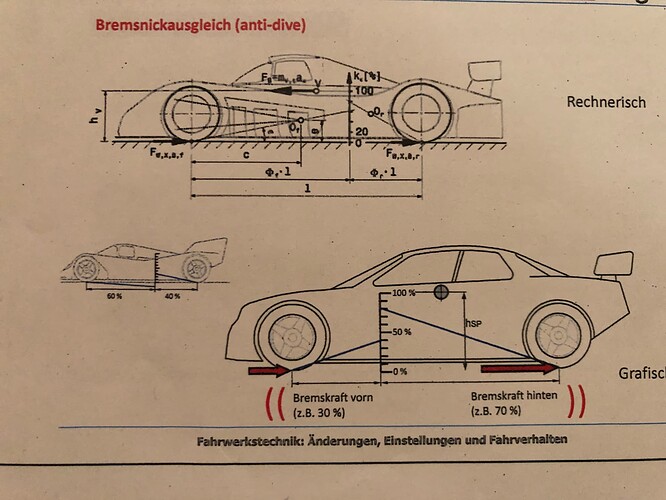 An anti-dive value of 100% means during braking the front suspension is not compressing, the braking force is working directly against the centre of gravity (COG), theoretically the most effecient.

An anti-dive value of 0% means the suspension travel hast to be first overcome before the braking force has any decelerating affect on the vehicle mass. Imagine trying to push an object with springs attached to your hands, you will have to cover a certain distance before the preload on the springs is greater than the breakaway torque of the object and the object begins to move. 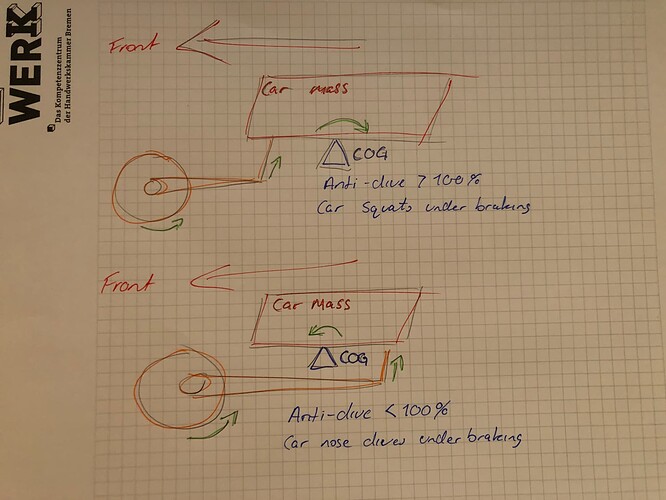 How does it look on the Sirion chassis?

I must admit this is not really something I had ever considered, but after looking into it it became clear further investigation was needed.
It had often bothered me that despite having the car sprung relatively hard it was still a bit doughey when jumping on the brakes. A few problems here and there losing traction on the rear end when braking hard, and the dreaded delay when hitting the brakes to try and get some weight on the front end, it’d take a moment before the weight hit the tires.

It would seem these are all things that could be related to poor anti-dive geometry.

The following diagram was made using data from my own car, which has been lowered and has modified strut tops providing more castor. 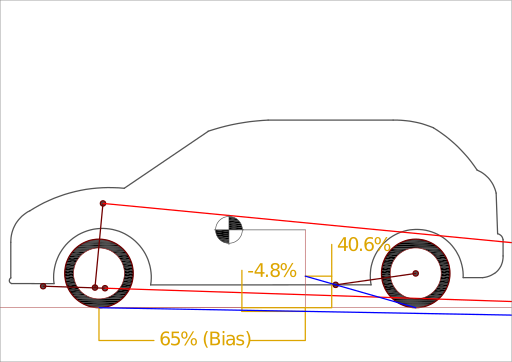 The ride height has almost no influence on the the anti-dive characteristics, as the relationship between the front and rear control-arm mounts remains the same, and the COG moves in conjunction with the ride height.

The increased castor does however change the characteristics in comparison to the stock geometry, as it pushes the IC downwards. It might be worth considering the compromise in future, whether or not the improved dynamic camber and increased feedback from the castor is worth losing some anti-dive, or vice-versa.

As you can see in the drawing, the sirion has minus anti squat on the front axle, meaning the braking force is pushing the front of the car down against the suspension with mechanical advantage.
And of the 35% braking force of the rear axle, approximatly 60% is lost in suspension travel, and 40% works directly against the COG.

The front suspension on the Daihatsu Sirion M1 chassis consists of a control-arm/radius-rod system, where the radius-rods and swaybar have been combined into one component. 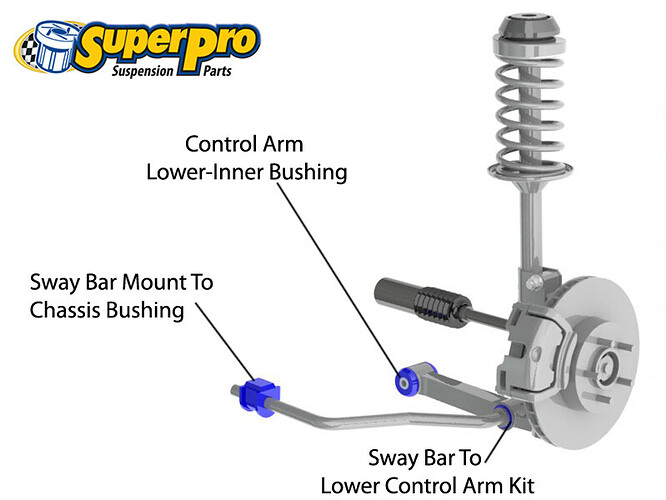 Somehow the IC needs to be raised, unfortunately the construction form of the front axle/sub-frame assembly means is not possible to raise the rear control-arm mount. The alternative to is lower the swaybar mounts.

My proposal is to machine some spacers the fit between the chassis and the K-frame in the front mounting holes. This would tilt the whole K-frame forwards, raising the IC as a result. 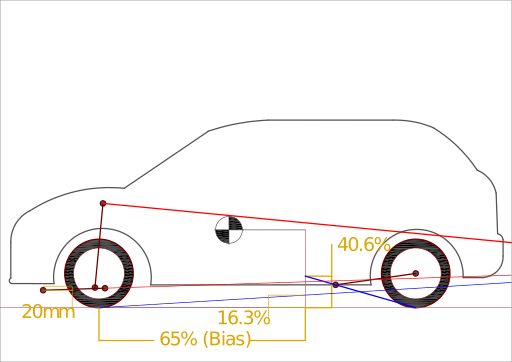 With a pair of 20mm spacers, the anti-dive value could be increased to approx 16%. That means during braking 16% of the braking force is working directly against the vehicle mass, with the remaining 84% working against the suspension before it has any affect on decelleration.

Hope you guys enjoyed the write-up

In regards to making the front of the subframe lower, if you convert to the Storia X4 subframe mounts there appears a specific spacer in it - 48475-97201-000 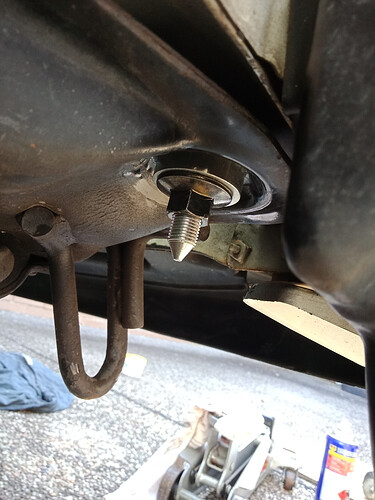 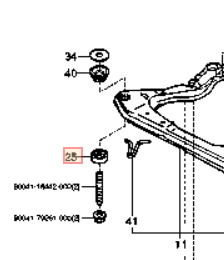 It looks like there are more threads on that stud, so could one just get a few more of that part# to stack up, thus lowering the front of the subframe?

I think you’re onto something here. It looks like if you did this conversion you could just stick an extra one or two of the washers in the front.

This is definitely something i’m going to try…

Thanks very much! i love it!

Very interesting to read Mick! I never thought dive/squat would have such a big impact on braking performance, and how it is influenced by factors like castor. Good work!

I never knew about this even existing…

But why don’t they just add the spacers from the factory? Are there any positives about having more dive? If you can achieve 20% more braking by such a simple modification I wonder why this isn’t standard.

If it isn’t done from factory then I would say it could be for many reason’s. Anything from budget to how it feels when you drive eg maybe a slight bit more vibration or noise etc.

You are not actually achieving 20% more braking, you are changing the geometry to redirect braking force from the suspension to the body

So that gives you less stress on the suspension? So that would mean less wear and less resistance to braking so the braking would improve? Is that the right-thinking for the results?

It’s a way to control pitch when braking, the car will not dive so much. It can be helpful if the rear is getting loose when braking, which is usually because the body rolls forwards, taking weight off the rear tyres.

right I got ya makes sense. That is a good proposed solution for that issue. I will be really intrigued how well you feel it work.

Anyone know the dimensions of the k-frame bolts?
I don’t have any spares laying around 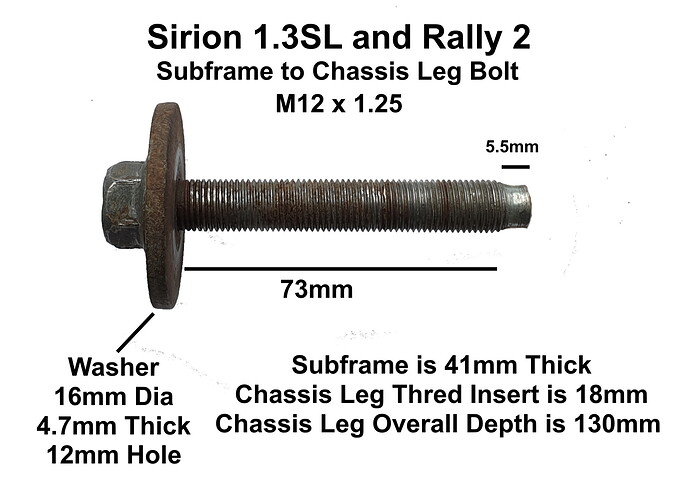 Machined some Alu spacers and got some longer bolts. The spacers are 16mm. Starting to have some ground clearance issues at the front of the k-frame, I think more than 16mm will be too problematic.

I have a race next weekend, so I can test it out. But just driving around I notice when braking the car dives less and the braking is more direct. 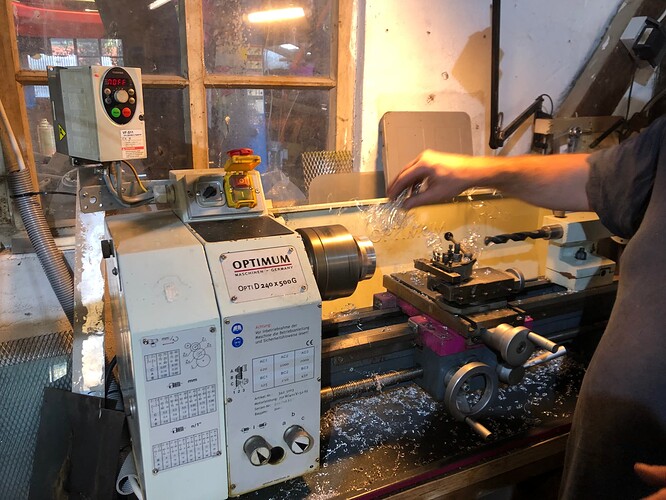 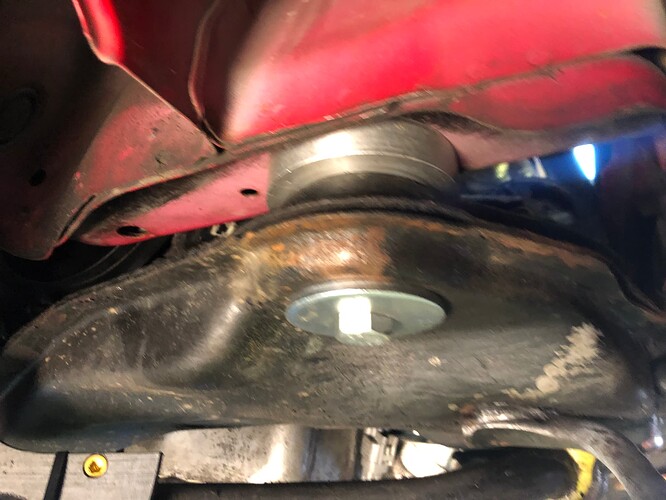 It’s also a matter of timing. The time taken to 'squat" is time till the brakes can begin to work. It was once thought that a drag car squatting helped traction, however, it was taking a fraction of a second off of the time till forward movement begun. You won’t see top level drag cars squat at all.

Instead of lowering the K frame or spacing it out, I raised the K frame sitting it hard up against the chassis rails and then raised the inner control arm locations. A lot more work (esp getting the gearbox to fit since I also lowered the engine and box in the K frame) [Jimmy you can look and see this] but it was the way to go to keep the control arms more parallel to the ground on the L200. I’d always wanted to do a proper radius rod, but was conscious of Motorsport Australia classes and doing this (I thought) would mean ending up as a Sports Sedan.

How did your race go? Did you notice any difference in braking?

There was a noticeable improvement during braking with much less dive. Unfortunately the roll centre was negatively affected, and we ended up with more body roll during cornering.

I have since removed the spaceres and I am looking for a way to increase anti dive without lowering the k-frame. There is enough room on the control arm mounts to close the holes and drill some new ones a bit higher, and notching the rear mounts on the k-frame so it sits higher at the back also looks like a option. Both would improve anti-dive and also improve the roll centre at the same time.

The outcome is really interesting. I am looking forward to hear the results of your next experiment.

I’m currently doing an internship where I’m designing the suspension for a project car, so I’m now looking at things like anti-geo as well. Today I was looking at roll and pitch centers, and thought about this topic, so I read it all again.

I’m not entirely sure about this, because I’m still in the learning process, but maybe tilting the strut further would work? Looking at the stock suspension layout and it’s centers (on the pictures you used), Tilting the strut even further backwards would result in the IC (instant center) moving more towards the front of the car. Also, because the LCA is tilted backwards, the IC should raise a bit as it’s moving forward.

Both of these things should result in a steeper PC (pitch center) line upwards, resulting in a higher anti-dive %. The obvious downside is that you’ll automatically gain more caster, which might not be ideal for your type of racing in terms of agility. Although, you might be able to improve that by decreasing the KPI (moving the strut towards the outside of the car), resulting in less lifting forces generated by turning the wheel. Of course, this has its own downsides, but it would be interesting to try.